Just when you thought you broke your original addiction to the first Puzzle Quest, Puzzle Quest 2 hits downloadable services and store shelves to suck you back in for more. 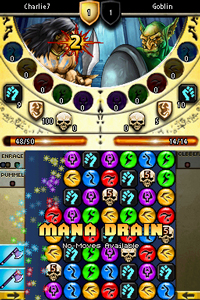 Fans of Bejeweled and the original Puzzle Quest will know exactly what to do in this challenging portable title.

Personally, I thought the original Puzzle Quest was a brilliant title and when I had heard that a sequel was in the works, I was only MILDLY interested. After all, when you have perfection, how can you improve upon it? Well, the brilliant minds at Infinite Interactive found a way to do just that.

At first glance, Puzzle Quest 2 looks like Bejeweled with some generic fantasy stickers slapped on it. Nothing could be more from the truth. At its core, yes, PQ2 works on Bejeweled‘s base concepts: align 3 like-colored spheres to make them disappear. The difference is, you’re constantly in competition with a monster or another gamer. If you align 3 skulls, you deal damage to your opponent. If you align 3 colors, you gain that color’s mana. Once you build up your mana, you can unleash special attacks and deal direct damage to your opponent. Depending on your class (you have the choice of Barbarian, Assassin, Paladin or Sorcerer) you’re granted different abilities, spells and statistic bonuses.

It’s an incredibly simple spin on the genre, but it’s also a highly effective one. When playing, you’re not just forced to think, “what is my next move?” but “what opportunities will be granted to my opponent if I do the following…”. 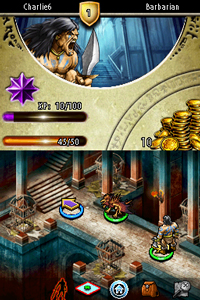 Instead of wandering around a map, there are dungeons to be explored, locks to pick, doors to break down and of course, monsters to be felled.

Aside from the puzzle battles, PQ2 has a Diablo-like overworld where you can talk to NPCs to further the main quest, collect side quests, shop at the vendors for improved gear, sell your loot and generally enjoy some quality RPG goodness. It’s a huge improvement compared to the overworld map that the original Puzzle Quest operated upon. There was nothing wrong with the maps from the first Puzzle Quest, but once you play Puzzle Quest 2, it’ll be hard to go back.

The character development in PQ2 is also pretty extensive. With every level, you can choose to improve one feature in your stats. There’s no system forcing you into picking skills, so your character’s abilities are exactly how you have personally molded them. With an open development system and four classes to choose from and hundreds of different items to help you along the way, no two gamers will experience the same game of Puzzle Quest 2.

If all this sounds too intimidating for a casual gamer, it’s not. It’s really really not. In fact, if you wanted to completely ignore the rather well-written storyline, then you can ignore it without hindering your gaming experience. There are giant golden arrows on the ground to show you which way to go if you ever get lost. For the brave and curious, there are hidden gems to be found off the beaten paths inside the dungeons.

The music is an improvement over the original featuring a well composed fantasy score. But like all Nintendo DS games, it sounds much better with headphones on. Surprisingly, there’s even a little voice acting within PQ2. Most NPCs have an opening line, but then the remainder of their dialogue is written. I was really hoping for someone to say “Stay awhile and listen” but I haven’t come across that person yet.

The best part about Puzzle Quest 2 is it’s incredibly fun and always provides a respectable challenge. I popped it into my DS just to “see how it is” while working on another project and I didn’t stop playing for a few hours. It’s one of those glorious time-vacuum video games that magically makes your time disappear which is FANTASTIC for a portable game. It’s just not so fantastic when you have deadlines to meet!

Be sure to pick this up on either the DS or the 360 through Xbox Live Arcade. Personally, I prefer the DS option simply because making my selections is exponentially easier with a stylus, but if you don’t have a DS, the 360 version is not to be taken lightly. And as always, on the 360 you can try it before you buy it.