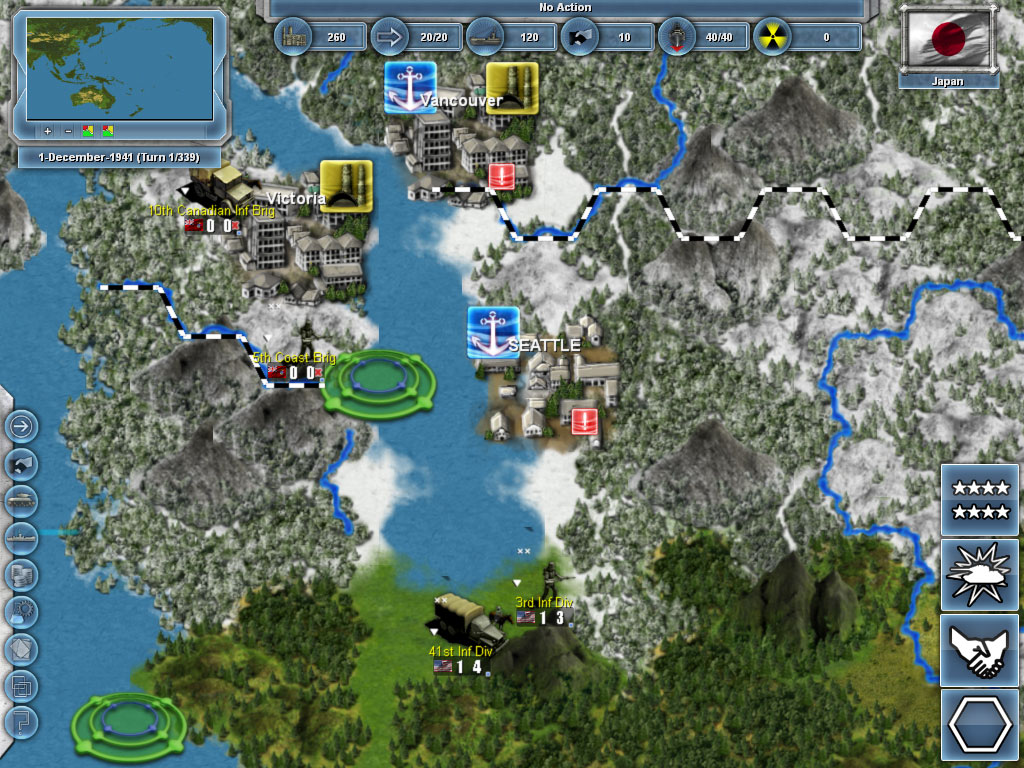 Storm Over the Pacific (SOtP) is probably not for you. I say probably because the game is likely to be highly appealing to a very small niche, one that values historical accuracy and meticulous strategic planning.

SOtP, if you didn’t realize by the statement above, is a turn based strategy game. An easy way to think of it would be as a cheaper version of Hearts of Iron. It takes place during World War II in the Pacific (duh!) and you can chose to play as any of the nations involved in the conflict. It makes for an interesting and most of all accurate portrayal of the period, one that other games fail to tackle with as much depth and precision. That said it does take some liberties. As many conflicts are history set pieces, it would only be natural (this being a game) that they ignore the historical outcome of these conflicts in order to allow the player a chance.

The gameplay takes you back to the truly old-school environment of this genre. We’re talking 20+ years ago old-school here. It revolves around very basic unit movement and management. Such things as intuitive interfaces, animation or sound effects totally absent.  The map is split up by a hex grid, with each hexagon serving as a “spot”. Different units can move different amounts of hexagons at a time, or attack from different distances. It all feels very arbitrary and limited. When you attack, all that happens is you get a message telling you how much damage you did, there are no animations, sounds effects or visual cues what-so-ever. This isn’t that abnormal for a game like this, but in addition the interface (though customizable) is simply horrible. 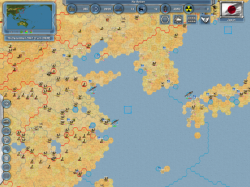 The Map style of the...map, not recommended.

Starting off the game you’ll want to run through the relatively short tutorial. It’ll be essential if you want to know anything about how to play the game. You could try to figure it out as you go, but the game has virtually no hint system or any sort of interface description. That said the tutorial isn’t exactly a cake walk either, as it only provides information at the end of each turn; information on what to do the next turn. The problem is that the series of actions you have to complete can be quite extensive and relatively complicated, which wouldn’t be that bad except that when the turn starts the window of tutorial information is removed and can never be accessed again, essentially requiring you to remember everything.

The game isn’t all about combat though. You’ll also have to do some light economy and political management. This largely boils down to acquiring and distributing Production Points (PP) and Diplomacy Points (DP) in to various projects and acts. Some consideration is important when considering the long term vs. short term profits, but this is largely only necessary in the end game or on the harder difficulties. The computer opponent(s) can at times be quite aggressive in this area so it’s important to keep up. 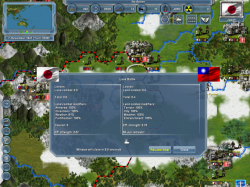 Graphically the game is pretty afoul. The maps are static and generic, composed of small texture bits strung together to create environments, which individually don’t even look all that great. As mentioned above there is no semblance of animation for anything, moving a unit simply teleports it to the next hexagon. The units and towns are low-res sprites that seem to only have a few variations before they repeat, none of which are particularly interesting or good looking. The Sound Design is non-existent; there is one originally scored track that is played in a background, it lasts an hour but it’s not exactly progressive so you’ll grow tired of it way too quickly. There are absolutely no sound effects of note.

In the end however I came to mildly enjoy Storm Over the Pacific, despite all its lacking’s it has a way of drawing you in. Sure it takes a few hours but you eventually start caring enough about your game to want to see the end. I found it very hard however to motivate myself to start up a new game after my first (and long) campaign was finished. There are a bunch of different scenarios to run through, but after you’ve seen what the game has to offer — doing it all again isn’t all that appealing. If you’re in love with the WWII period, if you adore turn based strategy games, if you for some reason can’t stand Hearts of Iron and if you couldn’t care less about graphics or sound design; then you should definitely go get Storm Over the Pacific right now. Everyone else; Don’t Bother!