A year after setting sail with Nitro Games’s naval RTS East India Company, which allowed you to control one of seven European nations to develop and monopolize trade in India, the developers at Nitro have again set sailed this time to pseudo-India, a.k.a. The Americas, in their latest release Commander: Conquest of the Americas. Similar to its predecessor, Commander allows players to control one of seven European factions: Great Britain, France, Spain, Portugal, Denmark, The Holy Roman Empire, and the Netherlands. Each faction has unique abilities in both economics and naval combat. However, the big difference between this game and East India Company is the fact that you essentially start off from scratch and it is up to you to establish colonies to begin building up your economy through trade and expansion. 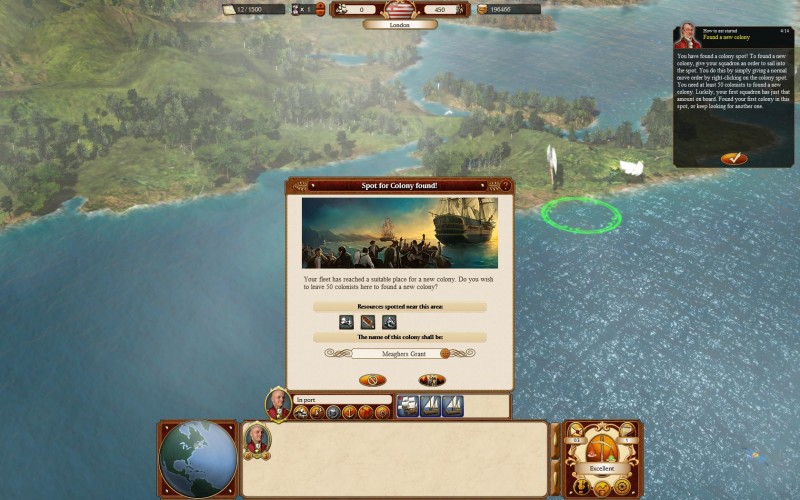 Do you want to land here?? 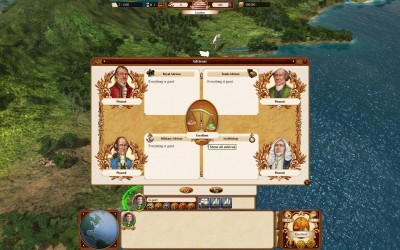 They will decide your fate should you fail your missions.

The gameplay in Commander is pretty straightforward in its general sense; establish colonies, establish trade routes, and expand and defend your overseas empire. There are only two playable campaign modes: Campaign and Free Campaign. Both modes begin in January 1500 and end in December 1650. The big difference boils down to the little things where in the regular campaign players will have to worry about maintaining confidence in four advisers: Royal, Military, Trade, and Archbishop. Throughout the duration of the normal campaign, you will receive random missions from each of these advisers, which will have time limits. If you complete them in a timely manner, you will receive rewards and make them happy. However, if you fail their missions, their confidence in you will dwindle and you will lose the game. The free campaign is as it is aptly named; no restrictions and no advisers.

When you begin the campaign, you start off with a small squadron of ships bearing your colonists bound for the New World. Your home port also provides a nice starting sum of money, but you will find that it disappears rapidly once you begin constructing your first colony. This is where it can start to become overwhelming for players new to this hybrid trade and naval warfare RTS genre. Good financial management in this game is extremely vital in this game, especially when you need to build up a larger fleet to be able to expand at the expense of your enemies as well as protecting your sea lanes from pirates. Players must be prepared to save a lot as you will find yourself in debt really quickly if you are trigger happy in spending money by building everything at once. With little help from the AI in getting to know the ins-and-outs of the game (even with little pop-up tips), and no tutorial to really help you get acquainted, you will find yourself learning as you go. 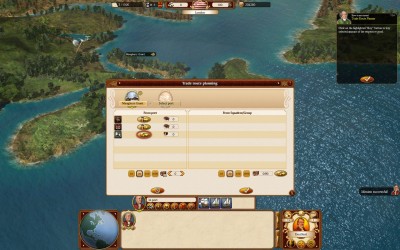 Establish and manage your trade links.

In order to jump-start the economy, players will need to exploit resources within the colony’s sphere of influence, which will expand as you begin to transport colonists from your home port. This is where the establish trade routes between your colonies and your home port comes in. Although there is an automatic trade route set up button, you still have to manage what to trade between ports including transporting new colonists and troops to your new outposts in the New World. However, players beware. As your colonies develop over time and your ability to produce finished goods from the raw materials in the colonies expands, you will have to modify these established trade routes in order to make a better profit. Also, as the colonies expand, the needs of your colonists will be greater and their need for manufactured goods from Europe will increase, potentially making your trade routes more complex. This is where it can become frustrating. In theory, when you add/subtract items from your ships, they would just keep sailing with the new modifications to the trade route. Unfortunately, this is a very temperamental feature. You will find that your ships will just stop moving and stay in the starting port of the trade route, which basically makes the route inactive. Consequently, you will need to delete the route and remake a new route from scratch. As you build more colonies and have to manage multiple routes, this setback would potentially become a huge cluster of hair pulling.

Although Commander is very trade centric, there’s also pretty nice naval combat element to it. For those players that have played East India Company, the controls and interface are basically the same. When you attack enemy ships you are given the choice of auto-resolving the combat or you can choose to fight it out manually. Battles are fought in the 3D battle interface and, as in East India Company, has two different modes of command: Strategic and Direct Command. For those that are unfamiliar with Direct Command, it allows players to literally take command of an individual ship, which is kind of like Sid Meier’s Pirates! Using the WASD-keys to maneuver your ship can allow you steer your ship more effectively than the AI as well as fire your broadsides at your own choosing. In this mode, a battle camera allows you to change views depending on the position of your target. Sometimes, the camera can be a little unresponsive at times when you want shift to where the action is at that instant. It can also be restrictive at times, especially when trying to better judge the position of your target to effectively fire. 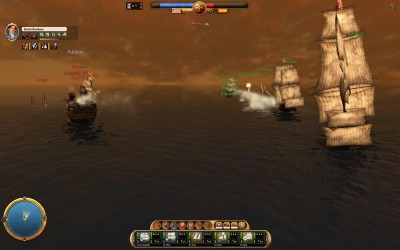 Gain naval supremacy over your rivals

Also, Commander provides different choices in ammunition including round shot, grape, and chain shot as well as the option to have the ship choose. In addition, there is the line formation button to better organize your five ship fleet, and leader skills, which help enhance your combat potential. Newcomers beware; if you are new to the 3D sea battle sequence, it is recommended that you play the Battle and Quick Battle feature that are separate from the campaigns just to familiarize yourself with the controls as there is a lack of a thorough tutorial.

In closing, Commander: Conquest of the Americas and East India Company are both very similar games in that their controls and gameplay parallel each other. However, in Commander, you are in essence settling an untamed land where you pretty much start from scratch. In either case, they are both enjoyable and highly addictive games nonetheless. Now I am not saying that they are completely identical and that you should avoid this game altogether. The experience is definitely quite unique. I can’t say much about the music as it continues to be repetitive and on loop, but the sound effects still offer a nice background appeal. Nitro still succeeds in bringing that balance between economics and warfare into Commander, which is a balance that many RTS games seem to constantly struggle with.