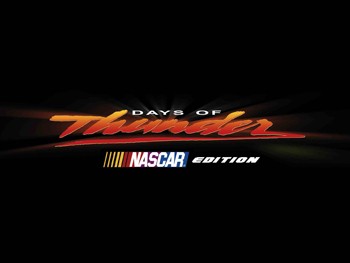 The digital release of games based on Tom Cruise’s old films continue on the Playstation Network. In addition to the recently delayed Top Gun, the film that introduced us to Cruise’s relationship with Nicole Kidman will be getting a video game makeover sometime later this summer. A stock car title bearing not only the Paramount Pictures’ license, but NASCAR’s, is being developed exclusively for the Playstation Network by Piranha Games.

Bearing the likeness of both the film’s characters and some of the more famous names from the NASCAR circuit (including Jeff Gordon and Tony Stewart), each AI is tailored to the personality and style of its driver. The game boasts up to 12 players able to compete in multiple multiplayer modes in addition the single player campaign.

“Racing against NASCAR drivers such as Jimmie Johnson and Mark Martin and ‘Days of Thunder’ characters Cole Trickle, Rowdy Burns, and Russ Wheeler simultaneously is something that could only happen in a video game, and a great way to celebrate the 20th anniversary of the film,” said Tom Lesinski, president of Paramount Digital Entertainment. “We are pleased to team up with SCEA and NASCAR to bring fans an adrenaline packed, one-of-a-kind arcade racing experience.”

“With more than 38 million users worldwide, PlayStation fans are turning to PlayStation Network more than ever for unique downloadable games,” said Rob Dyer, senior vice president of publisher relations, Sony Computer Entertainment America. “Offering a robust multiplayer racing experience, Days of Thunder: NASCAR Edition is a great example of exclusive content that can only be found on PlayStation Network.”