I’ve just returned from a live performance of Final Fantasy music played by the National Symphony Orchestra here in Washington, D.C., and while the music was good, the concert experience as a whole was somewhat disappointing.

It began promisingly enough with the immortal prelude, which was followed by a stirring rendition of ‘Liberi Fatali’ from Final Fantasy VIII. At this point, the concert began to suffer from what can only be described as ‘shitty video.’ I’m not talking about the quality of the footage, (though the pixels were visible from Row Q) but rather the actual video editing. Over the next 19 compositions played, I was subjected to some of the most amateurish and poorly edited videos I’ve ever seen.

Each video came off as a hastily thrown together mishmash of cutscenes from all points in each game and occasional in-game footage. There were times when the videos were fine, but that was only when the opening FMV from Final Fantasy VII was shown as the orchestra played ‘Opening – Bombing Mission’ and when footage of battles played over the orchestra’s performance of battle themes like ‘Don’t Be Afraid’ and ‘The Man with the Machine Gun,’ both from Final Fantasy VIII. 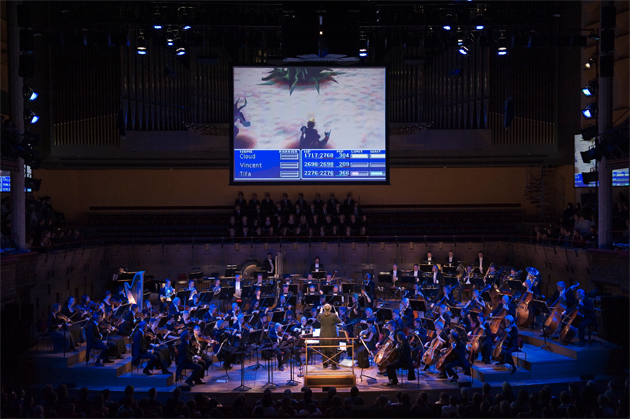 The video segments occasionally broke down completely, which resulted in boring and static slideshows of Yoshitaka Amano artwork. The artwork was gorgeous, but even some simple panning over each image would’ve done wonders, elevating the display from the level of classroom slideshow to something worth displaying.

Little attention was paid to the mood and tone of the music where video editing was concerned, and the editor constantly reused the same 10-second clips, sometimes in immediate succession, despite there being a wealth of footage for every game after VII. Also, considering the fact that Distant Worlds is sponsored by Square-Enix, it’s quite inexcusable that I should be seeing footage ripped from speed-runs and low resolution video.

Being a video editor, I might be a bit more critical than most, but I feel that the video portion of the concert soured the entire experience.

However, the main thing at a musical performance is, of course, the music. Below is the full list of what was played.

The first thing I dislike about this is that there is nothing from Final Fantasy I, II, III, or IV.  I can understand the omission of III, seeing as it’s one of the lesser known titles in the series, but IV was a landmark title that introduced the ATB system, II‘s ‘Rebel Army Theme’ is one of the best compositions in Final Fantasy history, and the importance of the first cannot be understated.

It was understandable that in the performance of Video Games Live! I attended last year, the music chosen to represent the Final Fantasy franchise came from VII, VIII, and X.  But in a performance that consists solely of compositions from the series, I expect a little variety and, at the very least, one track from each game in the main series and Final Fantasy Tactics.

The orchestra’s performance was excellent, though the performance of ‘JENOVA’ (Final Fantasy VII) left something to be desired, and was quite disappointing seeing as the conductor dangled a proverbial carrot by saying that the orchestra knew how to play ‘Dancing Mad,’ the epic piece that plays during the final battle with Kefka in Final Fantasy VI.

The highlight of the show was definitely ‘The Dream Oath Opera’ from Final Fantasy VI. Though the version on Orchestral Game Concert 4 performed by the Tokyo Symphony Orchestra in 1994 is superior, as is the version found on the first Distant Worlds album (performed by the Royal Stockholm Philharmonic), seeing it performed live is quite an experience.  Unfortunately, the baritone didn’t sing with as much feeling as those who had before him, but to someone who has only heard the in-game version, it would sound spectacular.

There were two encores.  The first was ‘Terra’s Theme’ from Final Fantasy VI, though I was unable to enjoy it because they chose that time to run credits on screen and the music was drowned out by waves of applause.  The second was ‘One-Winged Angel’ from Final Fantasy VII, which was met with the predictable fanboy reaction of nerdgasmic glee, replete with air punches and screams.

Personally, I’d recommend purchasing Distant Worlds II, which includes 13 tracks, one of which is an astounding 10:45 performance of ‘Dancing Mad,’ featuring Nobuo Uematsu’s new band, the Earthbound Papas.  As far as I know, this is the only orchestral recording of the piece, and it’s on the same level as the Black Mages (also a Nobuo Uematsu band project) performance off their first album.

If you’ve yet to see a live performance of video game music, however, Distant Worlds isn’t a bad way to go.  And if you’re living in the US, your only real options are this, Play!: A Video Game Symphony, and Video Games Live!.  Although if you have  a choice, Play and VGL are more enjoyable.