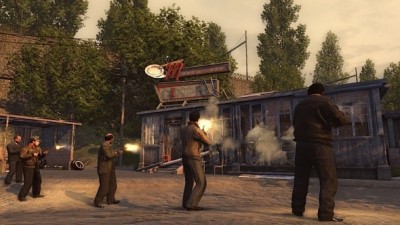 Italian Suits and Tommy Guns signal the return of Mafia, the more linear capo-regime in the open-world sandbox family. This time around the world of Empire Bay beckons us with its gritty underbelly and classic style. World War II vet and inheritor of a debt-rich family, Vito Scaletta enters the world of the Italian organized crime, quickly discovering that its cost is deeper and more omnipresent than expected. While each of the game’s essential elements shines like a new penny, a few key hang-ups demote a stellar experience down to a simply above average one. Depending on your play style however, you may not even notice.

Let’s get something clear right off the bat: Mafia II is not (read: n-o-t) Grand Theft Auto. This is both a point of clarification and a warning. Fans of open-worlds busting at the gut with side-quests and optional mini-games will find Empire Bay barren, despite its crowded streets and detailed environments. For the most part, this is not an accidental omission, the folks at 2K Czech obviously crafted Mafia II with a linear story-based mission structure in mind. But the complete absence of anything supplemental, beyond Playboy magazine collecting and car impounding for cash, still has an uncomfortable twinge to it, exacerbated by the large world map and the to/from mission driving. 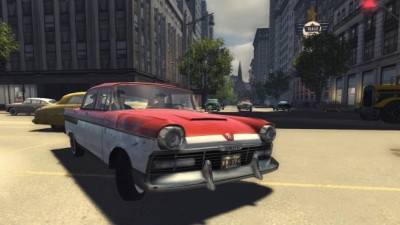 And drive you will, a lot. This is hardly a fault, in fact these segments remain largely impenetrable from nit picks, despite awkward-seeming gameplay elements. Both cars and polices remain true to the times, meaning that most automobiles will feel rusted and slow to d-pads accustomed to Burnout or Blur, and the entirety of the fuzz has their nightsticks firmly planted up their tail pipes. But the game constantly throws a variety of cars your way, all only a swift lock-picking mini-game away, so favorites quickly come into play, and a handy speed limiting widget on the UI helps you keep your car in the clear when the coppers around about. But should you run a curb and into a speed limit sign, out-witting the cops takes immediate preference over out-running them, a simple license paint swap or bribe quickly quieting sirens. Its definitely preferable to driving outside of a suspicion halo or crouching in an alley for 30 seconds, and goes a long way to help establish the subtle power made-men have over law enforcement. 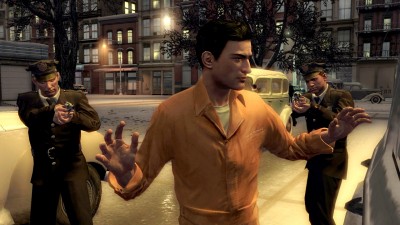 Given how much of the game is spent behind the wheel, the driving controls easily come off as the most intuitive, even with party members firing rounds out of the passenger side window. The in-car radio programs and station tracklists (a new, serious rival for the music lovers at Rockstar) do integrative wonders as well, making whatever left-over hang-ups you find in driving sleep with the fishes. Easily the most improved feature since Mafia: The City of Lost Heaven, you’ll find an odd level of satisfaction in cruising Empire Bay with Rosemary Clooney’s “Mambo Italiano” blaring in stereo.

Once you finally tire of station swapping, each mission plays out either in bullets or stealth. The inventory divide is your usual pistols-machine-shotgun divide, but the weapons each feel surprisingly period-realistic, the shotgun especially packing a stupid strong wallop. Movement controls are a bit loose given the depth and degree of the fire-fights Vito finds himself in, and pushing a button for entering cover is something shooters grew out of a couple of years ago, but overall the duck-and-fire gameplay is invested enough to provide some seriously impressive moments. Coupled with the story’s heavy presence throughout, and being pulled along by the arm may not be as bad as it sounds on paper. 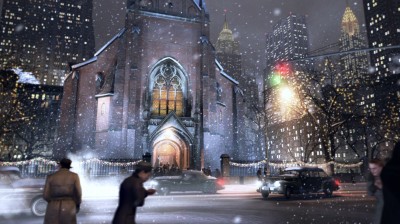 Oddly though, the game’s surprise adeptness at stealth is woefully under-utilized. It may be the simplest of Mafia II‘s three-prong structure, and it’s definitely not the most recognize feather in the mob man’s fedora, but snapping a guard’s neck from behind or guiding an ole’ codger out of his home as the feds moves in turns out to be equally as enjoyable as cutting their lives short with lead. Given the control’s general smoothness, it’s a welcome diversion from the direct action that never gets its full capabilities explored. On the other side of the aisle, the game’s brawling feature feels far too simplistic and pops up far too often. Dedicated players will find some hidden complexity in the combo system, but most will find themselves in an uncomfortable block-wait-punch pattern.

The thread that ties everything together turns out to be Mafia II‘s great strength, its story. The tale of Vito Scaletta is a much more dramatic and even-handed one than Tony Angello’s, with complex emotions and shifting morality constantly hanging over the protagonist’s shoulder. While lacking the intrinsic complexity many in its thematic brood share, the game makes up for it by having a cast of impressively realized performances, each capturing the flair of the era and their attitude of their creed with excellence. Character models brandish a subtle but recognizable emotional range, and the in-game world is deeply entrenched with period set design and costumes, making the transition into the story near instantaneous from the opening cinematic. It’s a good thing the story sticks, because over a fifth of a normal 10 hour playthrough is spent in cutscenes, each mission loading on the exposition like illegal cigarettes on a truck bed. Granted, the ending is comparatively flaccid, but the journey to it is one of the best stories the year has seen. Players may have complaints against racial and ethnic betrayals, but this is the single aspect of Mafia II that is arguably better than even the industry stand-bys in its genre.

Mafia II is a linear, straight-forward period piece with a strict three-prong structure and a location that’s a bit of a gameplay tease. If that can be your style, Vito Scaletta’s yarn will be the best you’ll weave this year. If you need to go anywhere at anytime to do anything, this is a restrictive experience best left to those keen on cutscenes. At 10 hours with no multiplayer, it’s simply too hard to recommend for purchase, if only because its replay value is the worst in its class. With its narrative strengths and rich visual detail, however, everyone should at least pay their respects and give the year’s most engrossing rental a spin. 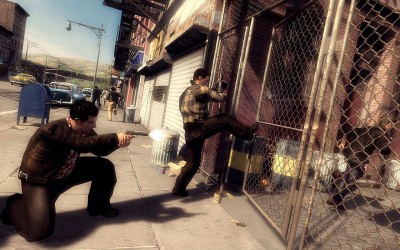