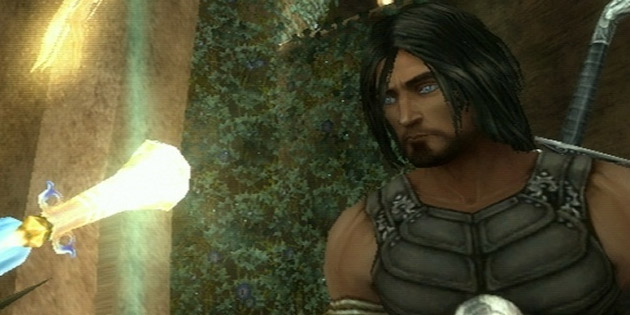 The Wii version of  Prince of Persia wasn’t as heralded as the version that was available for the PS3 or Xbox 360. But that’s a good thing, considering the Wii version tells a completely different story from the other console releases.

At the beginning of the game, the Prince is fleeing from the wrath of the Sands. As the town sinks around him, the Prince is guided to safety by a genie known as Zahra. Escaping from the maw of the sands, the Prince finds himself in an oasis near the kingdom of Izidahar, a mythical place built through the magic of an ancestral race that has long since departed. Finding a sword embedded in some vines, the Prince unleashes a demonic power (sound familiar?) and also encounters a strange-looking beast. After breaking the hilt of the sword in the monster’s flesh, the Prince must pursue the beast to restore the sword. The rest of the story follows the Prince’s efforts to bring back life back to the kingdom, earning him a conquest worthy of his father’s name. 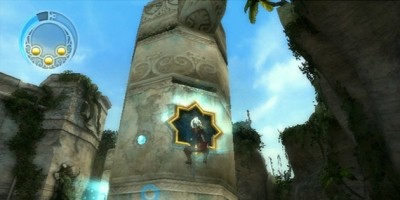 The environments are beautiful and well mapped.

Despite being bemoaned for having “last-gen” graphics, the Wii does a great job at creating the sense of scale that the Prince of Persia games are well-known for. Vast canyons and valleys conceal pathways that the Prince must traverse to reach his next goal. The landscapes have a logical sense to their design. Vines intertwine around the environments in interesting ways, giving the game an organic and earthly feel.

The Prince looks very similar to his appearance on the PS2 with a sly grin and the dry wit that paints the face of a seasoned traveler and smartass at the same time. It’s a welcome feature that long-running PoP fans will probably embrace with both arms.

This time around, the enemies are more generic looking. They’re similar to any demon-like enemy you find in games today. Their organic appearance is functional, even if they aren’t too bright. They don’t animate fluidly and they move at a lumbering pace that the Prince can easily outmatch his opponents, making combat a chore at times.

The music is a bit odd in the Wii version and this appears to be the result of glitches. I noticed several times when the music just cuts out, only to resume a moment later. It’s not that annoying, but it does impact the otherwise fine Arabian inspired melodies and themes that have permeated the series since its inception. I also don’t care for the all too familiar use of ambient themes, which occur when you only hear environmental sounds like water dripping and sand seeping. The ambient music feels like an unnecessary compromise.

Yuri Lowenthal (Simon from Gurgen Lagann) returns once again to give voice to the Prince and does a great job. He’s fun to listen to, but he also provides a powerful presence to the events as they unfold. When necessary, the Prince can be a strangely soothing guide that along with the in-game narrator, will serve to enhance the fairy tale-like setting of the game. 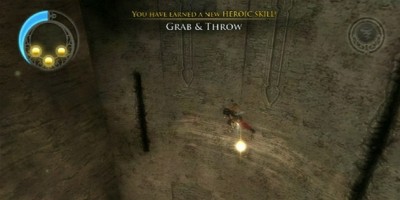 Using the Wii Remote for new moves doesn't feel as waggle-riffic as past Wii titles. Kudos to Ubisoft Quebec for that.

Forgotten Sands plays similarly to previous entries in the series, but with controls designed with the Wii in mind. The use of motion controls in combat feels natural. It’s a nice change of pace from just pressing the same buttons over and over again. All sword attacks are done by shaking the Wii Remote and you can block with your gauntlet using the Z button. Shaking the Nunchuk can do a quick punch to trick up the enemy’s defenses. Special moves also combine different motions as you earn more attack types through the game.

Often the combat feels like poetry in motion due to the Prince’s ability to easily maneuver around the enemies. It is can sometimes be repetitive to play but it’s always fun to watch.

The rest of the gameplay is the familiar puzzle based navigation from the series’ history. Half the fun is arriving at a gaping canyon, only to see the platform you must reach teasing you in the distance. Figuring out how to get there is the essence of the game, and you’ll find yourself running into different kinds of obstacles throughout. As you progress through the game, there is an ever-present feeling that the huge world of the game is uniquely built to accommodate the Prince’s abilities, making one smile at the idea of less agile heroes even standing a chance.

The Forgotten Sands for the Wii is another fine entry in the PoP series and one that fans, old and new, will likely enjoy. I applaud Ubisoft Quebec for wanting to create something unique for the Wii, realizing that it is a different kind of platform. Sands has enough of the classic formula and some interesting changes alike. The future definitely looks bright for the series even if it does have a long-running past. I hope it continues for a good while.