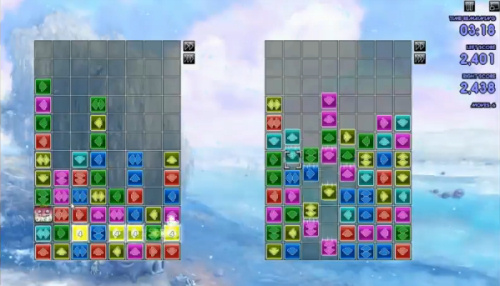 Arcen Game’s Tidalis doesn’t do itself any favors when it comes to first impressions. It’s visuals reek of being “Bejeweled Clone #24601,” and it’s music just reeks. But don’t let all its shortcomings, and there are more than a few, stop you from enjoying its surprisingly intricate and nuanced gameplay.

In an action that is so familiar by now it must be the newest human psychological thinking pattern, a floating container of multi-colored blocks is filled at the beginning of each stage in Tidalis; and it is your task to match and remove as many as you can. However, your first instinct to swap blocks themselves will be fruitless, as these here blocks don’t require the movement of themselves as a whole, but of their sides, and more importantly, the directional arrows on them. When first selecting a block, it and its similar cousins light up on the field. Create an unbroken chain of light between at least three, and they are removed from play.

Complicating the basic block-removing is a surprisingly balanced set of hindrances and saving graces. Merely going hog-wild on the board will eventually cause you to summon a progressively increasing set of falling blocks that will severely hamper your progress, if not lose the game outright. Beyond merely planning ahead, however, the game throws a bone your way (perhaps one a little too big) with its aforementioned light chain effect upon block selection, among its larger suite of aid abilities, each matched with an inverse hindrance. The balance of power leans a bit more to the player’s side to be of use to any high-skilled puzzle gamer, but Tidalis manages a decent-enough give and take to make playthroughs enjoyable, if not excessively challenging.

The comparisons of others in the genre begin immediately upon loading and rarely stop. Its beefed-up vanilla story mode is pure

Puzzle Quest, its gameplay both varied like Lumines and familiar like Bejeweled. The first couple of rounds is both ear and eye aggravation due to its bluntly ugly presentation, but the game comes into its own at just the right time, and maintains a much stronger look from there on out. For those not completely burnt out, there is also the standard array of network multiplayer options and supplemental boards to play through.

Initially unpleasant and a bit too easy, Tidalis still manages to worm its way into your pleasure centers long before you expect it to. Arcen may need better sound designers, but connecting lights is much more amusing than it should be. In the sardine-tight puzzle market, Tidalis is fun enough to merit at least a full-attention demo run-through to make sure you can stand its unattractiveness. But if you haven’t developed new primary reflexes from gem-swapping yet, it may be time to match lights instead.