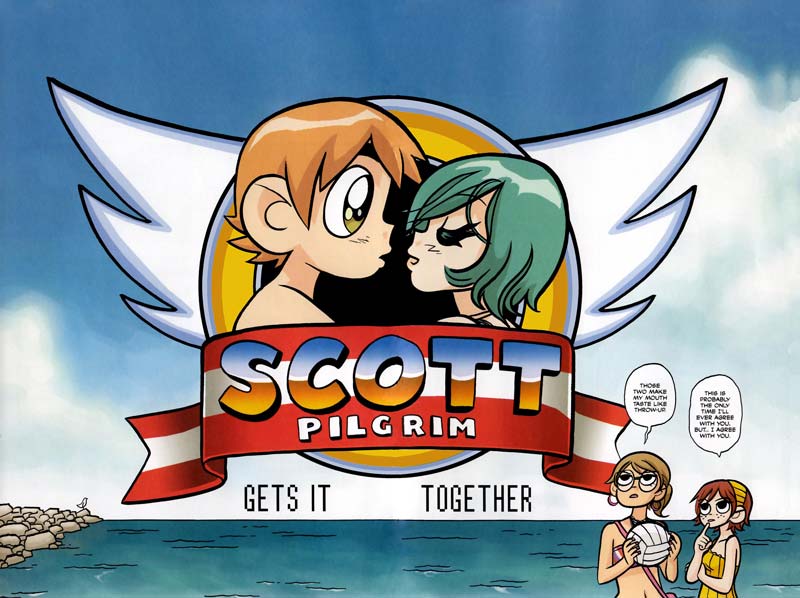 With the recent release of Scott Pilgrim vs. the World, both the movie and the game, I thought I would shed some light on the source material. Before it became a film and a video game, Scott Pilgrim was a graphic novel series written and illustrated by Bryan Lee O’Malley. The graphic novel spans six years from Vol. 1: Scott Pilgrim’s Precious Little Life released in August of 2004, to Vol. 6: Scott Pilgrim’s Finest Hour released just this past July. This series is a mix of comedy, action and romance and will definitely give readers a break from reality with its off the wall story.

We are Sex Bob-omb!

Scott Pilgrim follows, well, Scott Pilgrim. He is a 23-year-old Canadian who has lived in Toronto his entire life. He is a part-time bassist for the band Sex Bob-omb, and a full-time free loader. He is also currently nursing a broken heart by dating a high schooler. Everything seems to be going nice and simple for him until he sees the girl of his dreams.

Overall, the plot of the comic is very simple, but it is told in an awesome way. The only way Scott can date the girl of his dreams, Ramona, is by defeating her seven evil ex-boyfriends. This sounds like something plucked straight from a video game, and that is only the beginning. After a brief introduction, the story expertly walks the line between fantasy and reality. Throughout the graphic novel you will see things like super powers, extra lives, and giant robots, but the setting always remains firmly in Toronto. After a little while, you will stop questioning these strange happenings and accept them as normal, everyday things that happen to the characters.

Scott and Ramona are supported by colorful cast of characters. Some of the supporting cast such as Scott’s band mates Stephen Stills and Kim Pine are a large part of the story, while others like Comaeu (the guy who knows everyone), and Sandra & Monique (gossip girls) are there to dispense information every now and then. A lot of the characters have the type of personality that you can compare with people you know, which is pretty interesting. Even though some of the supporting cast have very small roles, all of them play an important part in bringing the story together. 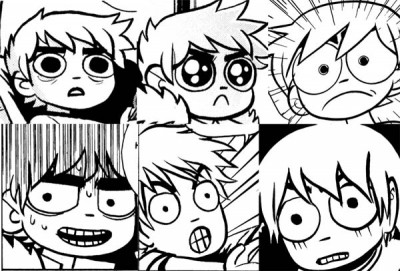 The writing in Scott Pilgrim is fantastic. Most of the time the comic is a laugh a minute, and when you’re not laughing you are wondering what will happen to Scott, Ramona, and company next. The humor is definitely more modern and the closest thing I can compare it to is something akin to the type of humor some of the Adult Swim shows use on Cartoon Network. You have to pay attention because some of the plot elements are introduced a little sporadically and if you are skimming, or zoning out a little while reading you might miss something.

The art style is also very pleasing to look at. The drawings are usually pretty simple and almost the entire comic is drawn in strictly black and white with a few shades of gray here and there. However, that is not a bad thing whatsoever. When you look at the pictures you will see that just looking at the characters’ faces, not to mention their body language, really brings out their mood and personality. Scott alone makes too many facial expressions to count and a lot of them made me laugh out loud. The fight scenes are also very entertaining to look at since many of them start of as a fist fight, but then escalate into something else entirely.

One thing I learned about this series after reading about halfway through is that many of the locations used in the comic are based on real places in Toronto. This includes places like malls, libraries, landmarks and even some small local businesses. I thought the use of specific places within Toronto was pretty interesting and it got me wondering what some of them actually look like, outside and in.

As far as the film goes, Scott Pilgrim vs. the World is a decent translation of the comic. The similarities between the graphic novel and the film are about the same as any other book turned into a movie. Certain things are taken straight from the comic, others are slightly different and some of it is completely different. However, the movie still captures the good humor and spirit of the comic. If you have already seen the film, the graphic novel is still worth reading to get some of the story elements explained more thoroughly and to see what happens differently.

Scott Pilgrim is a very entertaining read. Spanning across six volumes, the story of Scott has a simple, but well told story, is well written and is fun to look at. It also has more video game references than you can shake a stick at. With just the right amounts of comedy, action and romance, Scott Pilgrim is definitely worth checking out. Once you start reading you will not want to put it down.