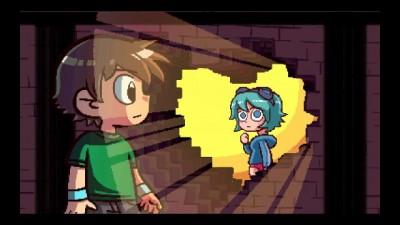 Released for the film but designed from the comic, Scott Pilgrim vs. The World: The Game looks to bring the gamer culture-infused world of the Sex Bob-omb bassist into the digital download space. There are seven evil exes to fight to win the love of your life, and plenty of combos and retro aesthetics to help you on the way. Some major design omissions may turn off a lot of gamers, but smart production values and an amazing soundtrack make Scott’s battle one of the best movie/comic-based games out there.

As classic as video game motivations get, there’s a girl you want and baddies in your way to getting her. Ramona Flowers has captured the heart of Scott Pilgrim, but he must battle his way through her seven jealous exes before he can find piece with her. So you and up to three other friends can pick from either of the main couple, Kim Pine (Sex Bob-omb’s drummer), and “Young” Neil Stills (Sex Bob-omb’s….yeah….) to battle your way through each envious ex River City Ransom style. 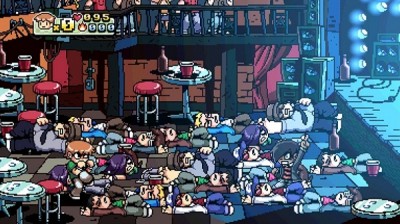 The plot sets up the stages and leaves you to it, but the game doesn’t let skimpy exposition stop it from filling the screen with personality. From the bass guitar boss battles taking place on dueling Guitar Hero tracks to each stage-shop hocking item upgrades as funny-named foodstuffs, Pilgrim knows where its garlic bread is buttered and slathers on the fandom-catering thick and sweet. Helping the in-jokes is a charming ret-con 16-bit style from Paul Robertson that leaves just enough room for emoting and a wicked awesome chiptune soundtrack from Anamanaguchi, if the game doesn’t weasel its way into your heart immediately, you have some games you need to go back and play.

While scrolling sides and beating ’em up is the main flavor to be sampled here, a slighty-above-standard combo system and

RPG-esque leveling up round out the palette to a nice balance. The character of Knives Chau can also be called in for a bit of a tag-team full assault on the screen ala Golden Axe, to delightful effect. You’ll feel the warm glow of nostalgia, but not be forced to remember what 20 years of gaming innovation feels like in the process….mostly. While an understandable omission for retro’s sake, the lack of any (repeat: any) online functionality whatsoever cuts off more than one limb for Scott‘s longevity. Couch co-op is still the best way to play with other people regardless, but if you live away from buddies, you’ll be stuck trudging through the single player mode. And with a slightly sporadic difficulty curve – mostly controlling-snapping levels leading to cake-walk bosses – it’s a long road ahead. 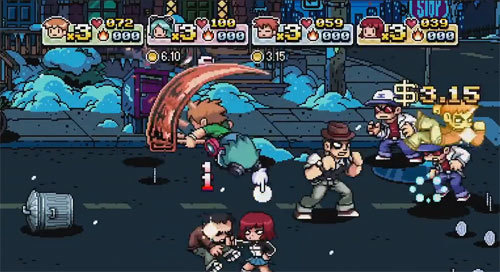 While being purposefully stuck in the 80s isn’t always a good thing, Scott Pilgrim vs. The World: The Game oozes personality and boasts some tunes that will get in your head unlike anything since a certain AI promised you some cake. Playing successfully with the best bits its genre has had over the years, its currently some of the best fun for you and three gamer friends available. Like the coolest person at the arcade, its self-aware enough to know when its good and focus on that.

One thought on “Scott Pilgrim vs. The World: The Game Review”