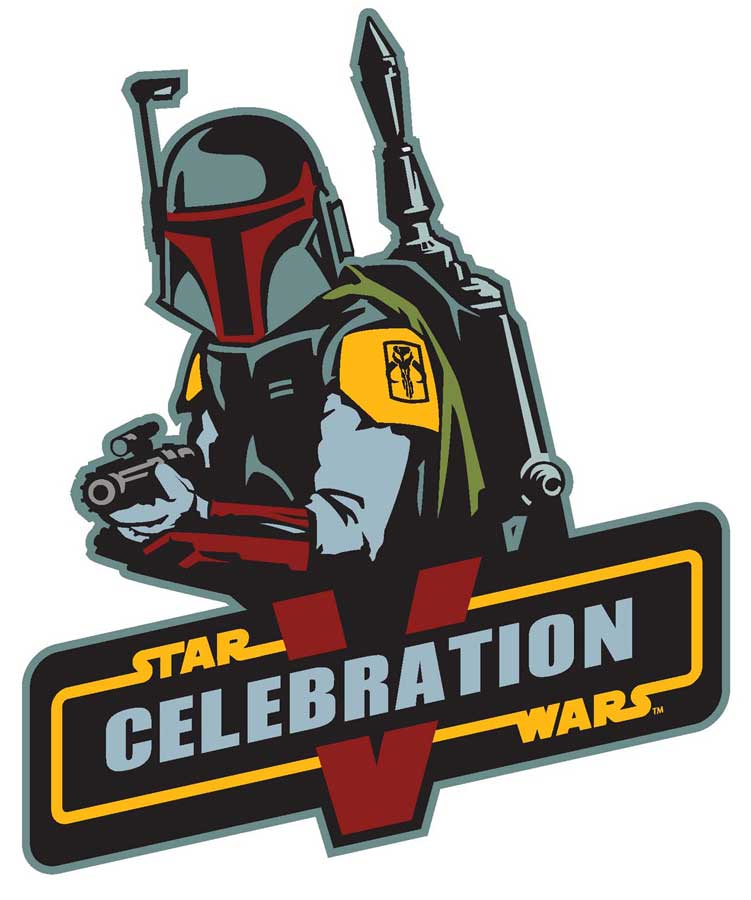 Whenever there is a benchmark year for Star Wars, such as an important movie release or a specific anniversary, people (mostly geeks) from all over the world gather at Star Wars Celebration. This convention began in 1999 celebrating the release of Episode I, and since then there have been celebrations for the releases of Episodes II and III, and the 30th anniversaries of Episodes IV and V. Fortunately for my geeky friends and I, the celebration for Episode V was located in Orlando, Florida. When we found this out we all immediately bought our tickets and began planning our costumes. 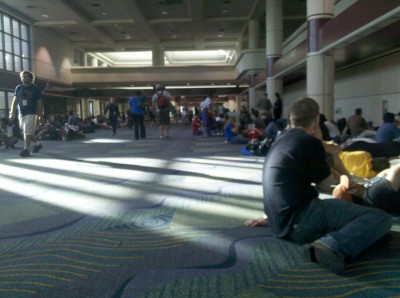 Before the convention we heard about an interview with George Lucas given by Jon Stewart, and wristbands for that event were being given out on a first come, first serve basis. Naturally we got to the convention center at about 12:45 Saturday morning and we went to the end of a line of about 700 people. We waited until they gave out the wristbands at around 6:00 in the morning and then we walked inside and waited some more. Finally, at around 10:00 we began to move.

When we settled into the auditorium for the “Main Event” we sat for a few minutes anxiously waiting for the interview to start. However, the people running the event thought it would be cool to make everyone who just waited for 10 or so hours stand up and dance to their 80’s playlist for what seemed like an eternity. Finally, a squad of stormtroopers escorted Jon Stewart out onto the stage, and shortly after, Stewart introduced George Lucas. The crowd went absolutely wild. After cracking a few jokes Stewart started to ask general questions, as well as very specific ones. For example, the first question was something along the lines of “In Episode IV, why let C3PO drive the landspeeder during the search for R2D2 when Luke is already an accomplished pilot?” Without skipping a beat, Lucas replies with “Well, it’s amazing what wonders a good oil bath can do for you.”

For most of the rest of the interview, Lucas told the story of how Star Wars came to be. He talked about everything from American Graffiti’s success giving him a window to do his own project, to how he realizes that the new trilogy does not resonate so well with older fans of the series. He also talked about some of the more specific things like how he got some of the names for certain things in the Star Wars Universe. For example, Darth Vader means “dark father” in Dutch(ish). All in all he said he believed in the films even when they did not look too promising, and that he really appreciates his fans for being so devoted to the series. 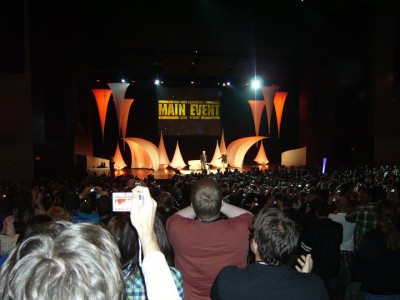 The Main Event stage from my seat waaaay in the back

A ways through the interview Stewart asks Lucas if he is working on any projects. Lucas announced a now unnamed cartoon that Seth Green is working on, as well as the Star Wars Saga coming out on Blu-ray. Then they did some funny stuff like present Stewart with a “Stewart Trooper” action figure made in his likeness, and then they dropped the big bomb. They brought out Mark Hamill to introduce the original opening of Return of the Jedi, which depicts Vader calling out to Luke using the Force, and showing Luke putting the finishing touches on his lightsaber. If that was not enough, Carrie Fisher came out soon after that. They closed out the show by talking about how mind-blowing it is to know that 30+ years later, Star Wars is still making a huge impact on society, and of course, by thanking the fans who immediately burst into thunderous applause, myself included. I regret that I did not have any means of recording the interview, but by now the entire thing should be up on Youtube. 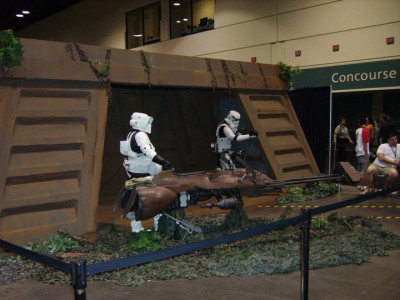 After the interview was over, we had to take a couple minutes to collect our thoughts. When we calmed down we made our way to the preview for The Force Unleashed II. We thought we might be able to catch a glimpse of something we have not seen yet, but unfortunately there was not much. They screened the first trailer, along with the Boba Fett and Yoda trailers that have already been circling around the Internet and then went into some game play. They showed Starkiller wreaking havoc on Kamino and in an arena on the planet of Cato Neimoidia. They also played through most of one of the challenge stages, which involved jumping to and from moving platforms. The game definitely looks like a lot of fun, but there really isn’t anything new to report.

Last, but definitely not least, we went to a Q&A with Seth Green, Matt Senreich and Tom Root from Robot Chicken. They started off with a video compiling all the best scenes from Robot Chicken Star Wars I and II and then showed a trailer for Robot Chicken Star Wars III. Then they opened the floor for questions, which ranged from Robot Chicken related to random things like “was that really you in that commercial?” The best question I heard was from a lady who asked if Joker was going to be a romance option for female Shepards in Mass Effect 3. Green said probably not due to his fragile condition, but that he might risk it if he needed companionship that badly. 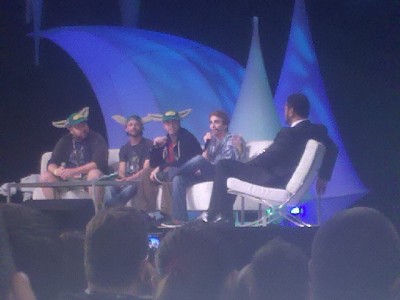 Since we only had the one day pass we did not have any more time for shows, but we definitely saw plenty of other cool things. First and foremost, a ton of people dressed up. There were Jedi, Sith, stormtroopers, Mandalorians, Twi’leks, and so much more. My favorite by far was a steam punk version of Boba Fett. In our group we had three random Jedi, me being one of them, Obi-Wan, Anakin and Starkiller and throughout the day a number of people asked if they could take pictures with us, which was really cool.

In addition to the people that dressed up, there was a ton of merchandise for sale, both convention specific and from other collectors. There was so much going on in that main shopping area it overloaded my senses. Among the merchandise were walls of t-shirts, action figures, LEGO sets, statues and lightsabers. There was even an onsite tattoo parlor for those who wanted to get some Star Wars related ink done. At one point near the end of the convention someone came up to us and gave us two fan made movies and told us to spread the word, so expect a couple reviews on them in the near future. Sadly, I did not purchase anything mainly because I knew if I did I would turn a corner and see something I wanted even more. 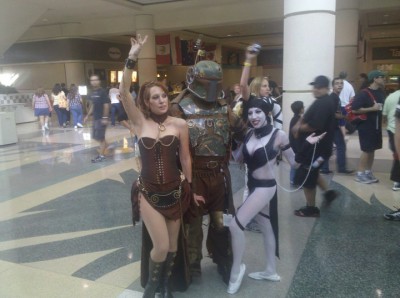 Star Wars Celebration V was my first convention of any kind, and I think I fared rather well considering I was without sleep for 38 hours and without food for 24. I wish I had more time there because it was a lot of fun and I definitely wanted to see more of it. Overall it was well worth the price of admission and I will definitely be going next time it is close to home.