It’s been over 12 years since the original StarCraft first made its way into our hearts back in March of 1998.  Has the long wait been worth it?  Has the all hype lived up to itself?  Time to find out!

Let’s start with one of the first things you’ll see.  When you begin installing StarCraft II: Wings of Liberty you’re given a treat; especially for those of you who’ve never played the prior games.  There is a fully voice acted narrative of key plot points that get you up to speed on what happened in the original StarCraft.  This is especially the case when pertaining to the Jim Raynor storyline that the Terran heavy Wings of Liberty campaign focuses on.

As with seemingly every Blizzard RTS in recent memory we are again presented with an epic story-driven single player campaign combined with immensely deep online multiplayer component.  For the sake of differentiation however, let’s start with the single player portion of the game. 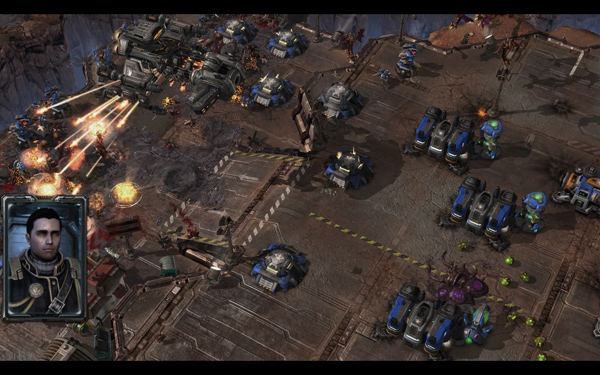 Let's get this party going!

The story picks up where StarCraft: Brood Wars left off.  Right now the Zerg have been “away” for around four years and our Terran hero, Jim Raynor, has been reduced to an alcoholic freedom fighter who still blames himself and someone else for what happened to a central character in the StarCraft universe.  It’s important to make it clear that this is a Terran campaign.  This is part of Blizzards plan to provide three engaging single player campaign experiences (one for every faction: Terran, Zerg, and Protoss).  For those of you who think Blizzard is going to give you less of an experience via race campaign segmentation, your fears can be quelled.  You’ll get more than enough game…and for kicks Blizzard lets us play as the Protoss during part of the campaign anyway.

If you’ve played StarCraft before or Warcraft III, then you know exactly what you’re going to get.  The missions are a lot of what you’re used to.  Survive this long, protect this, collect this many resources, sneak about or dominate with this hero unit.  There are a few missions add some really lively dynamic elements, such as constantly needing to relocate your base and units to the right side of the map to escape a fire closing in from the left, or having to mine minerals in five minute intervals due to lava briefly overtaking the node locations.  Now, at first I thought to myself…wow, this feels like I’m playing some of the same missions from StarCraft and Warcraft III all over again.  However, upon more reflection I realized there was nothing truly wrong with that, it was and is entertaining.  Blizzard has done a superb job of mixing things up so there isn’t a feeling of intense repetition looming overhead.  More importantly though, they’ve done something to add a ridiculous amount of replay value to the single player campaign…something that actually entices me to beat the game on brutal difficulty.  If you’ve played World of Warcraft (also from Blizzard) then you might have seen this coming.

Achievements!  There are now specific objectives within every mission that you can choose to accomplish.  These feats are each worth a score (710 below) which are showcased within your SC2 profile on the new Battle.net.  On top of this, completing certain achievements will unlock online goodies such as profile portraits that others will see when you participated in online play.  Needless to say, this addition has added a vast amount of longevity to a single player campaign that I otherwise would play through maybe once every three to four years. 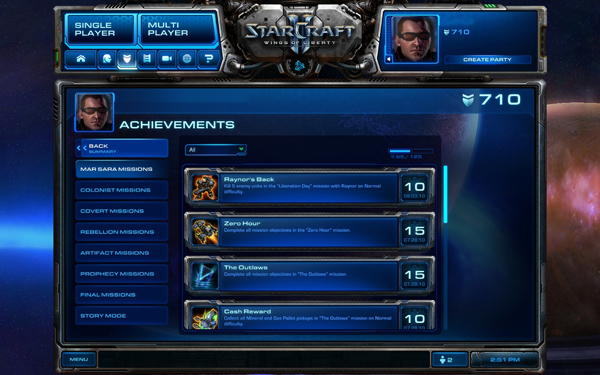 What you see here is just a shard of all the available achievements.

Outside of the RTS based missions themselves, the game has shifted towards more of an RPG.  As opposed to going from one mission to the next you now are aboard your ship the “Hyperion,” where you can talk to various characters, interact with objects in the environment, and use credits and research points earned through missions in order to purchase upgrades and new technology.  Within the Hyperion are four different areas, each with different purposes and people to talk to.  The Cantina section alone has an arcade machine with a StarCraft themed Raiden clone that pays homage to a relatively unknown classic Blizzard game *cough* Lost Vikings *cough,* a jukebox, a dancing WoW night elf, a TV with news broadcasts and more.  For those who have played Mass Effect before, 2 especially, it has a Normandy feel to it even though you don’t actually walk around.  You’ll see what I mean when you play it. 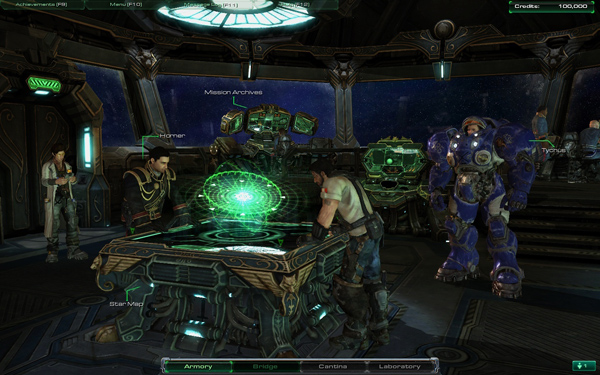 Raynor can't wait to get back to the cantina.

I beat the single player campaign on normal in around fifteen hours with no mission feeling too short.  This is a testament to the work done on the missions.  That said, there were a few that felt too long.  Even so, the related achievements for said missions actually acknowledged this issue in their own ways. For instance, you’d receive an achievement if you completed the mission faster, or did something that actually made use of the higher than average time it took to complete the mission.  If I was to recommend StarCraft II on the single player alone, I would suggest purchasing it.  This is one of, if not the greatest single player RTS ever created… but how will the even more hyped multiplayer hold up?

Well, it actually holds up for the most part.  Straight away you can tell how much effort was put into balancing.  You can also recognize just how unchanged it is from the original.  No serious risks were made to the proven, but old, game mechanics.  There are a multitude of new units for all three factions; some of which can now scale walls and the like, but outside of that you’ll feel like you never really left Brood Wars.  While it may be easy to knock Blizzard for really not taking any risks, I can’t see why they would.  StarCraft has been played by millions for over a decade now, so why mess too much with what’s been working?  Many of us saw how brave yet radical changes paid off negatively in Command & Conquer 4. 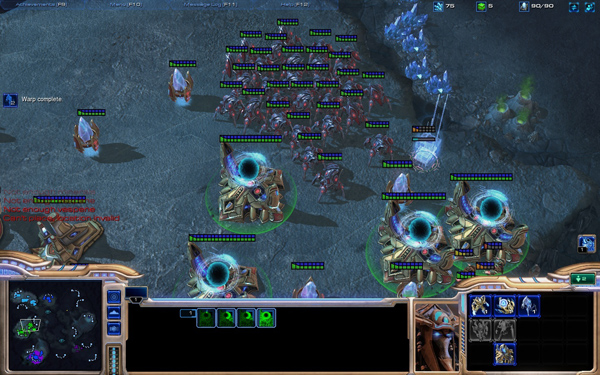 I love me some stalkers and warp gates!

For fans of the original, you will notice that quite a few units from the past have been removed or altered.  Vultures, lurkers, reavers, and more are all gone.  This move actually breaths some freshness into the game, and besides if you’re really mad you can’t play some of the classics, don’t worry too much.  The single player campaign lets you use the Terran ones.  I see the same thing happening in the following expansion with the possibility of some of these units being added back into the multiplayer down the road.

The ladder system is different that what you’re used too.  You’re now in a skill ranked league (Bronze, Silver, Gold, Platinum, or Diamond) which are filled up with divisions.  It’s pretty neat to fight your way up, and if you do a great job you’ll be promoted to a league of harder difficulty (Silver -> Gold) as well as a new division within your new league.  The main issue with this is at the moment there’s no way to truly see how you match up against everyone else.  There’s no definitive #1 player, #1 team, or anything of that sort.

Custom games no longer stream by and refresh for those of you who are used to this from WarCraft III.  They are now all auto-sorted by popularity.  You simply queue up for the map you want and BAM, there you go.  No more waiting for that game you really want to play to pop up.  The main issue with this is that it really makes the scope of visible maps quite small.  It’s annoying to always have to click to view more.  The filtering and lack of search options also leave much to be desired.  Thus, often when you find a less popular game that you really enjoy, there’s rarely anyone who joins up to play it.

There’s no LAN.  In this day in age I really don’t see this as that big of a deal except for tournaments.  Also, I believe Blizzard is looking into LAN capable builds of the game for tournaments endorsed by them.

These quibbles aside, the above are nitpicks compared to the following.  The game is region locked.  Have friends in Europe or Asia?  Too bad!  They can’t play with you unless they buy the North American version of the game.  I find this entire prospect ludicrous.  From a match standpoint where latency is vital, I get it, and I’m all for region locking league ranked games.  However, if you just want to do co-op, custom match, and the like with your Norwegian homey, sorry.  At the moment Australians will be getting a free North American copy since they’re stuck in the South-East Asia region.  Not exactly a high-population area filled completely with fellow English speakers to game with.  Still, this is a lazy solution for what should be a proper fix that unites StarCraft II players of the world rather than divides them.

It sounds like I really railed on the multiplayer, and I did to an extent.  But it was a barrage of love.  All in all I’ve had a blast with the multiplayer component, and like the single player we are again privy to a crazy amount of achievements that will be chewing up countless hours.  All I need is one-thousand 1v1 wins as Zerg to unlock the Queen of Blades profile portrait! 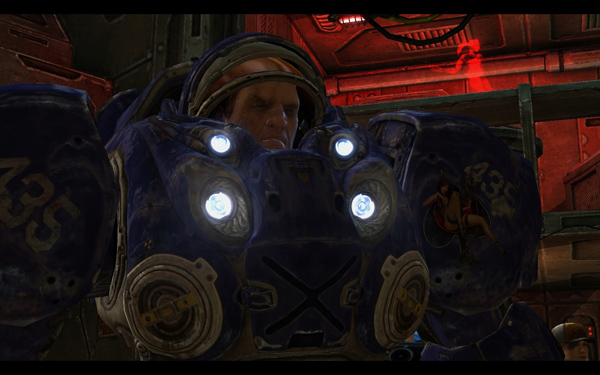 You best get this game, or I'ma find you.

So there you have it.  This is a game that should be on your computer…right now.  The sixty dollars will easily pay for itself in the amount of fun provided.  If you’re not a pro at RTS games and you’re tip-toeing around, this game has settings and barriers that allow people of all skill levels to have a good time in both single and multiplayer.  StarCraft II: Wings of Liberty is truly two phenomenal games in one with the experiences you’re getting.  Buy this game.