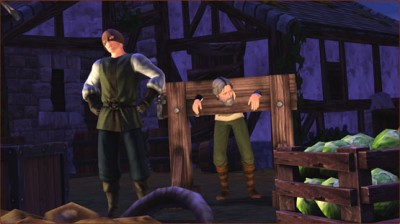 Ever want to take your Sim back to the 12th century? Well, EA Play has vowed to satisfy such a wish by releasing The Sims Medieval, a self-explanatory stand-alone release that puts the gibberish-speaking characters back into the time of swords and sorcery. Set for release sometime in the spring of 2011, the game looks to add quite a bit of RPG-style elements, allowing you to create and follow “Hero” Sim characters and accept quests as you build your own kingdom.

“The Middle Ages is a time of intrigue, legend, and excitement. It offers a perfect backdrop for a brand new series from The Sims studio due to the limitless stories that can be told,” said Scott Evans, General Manager of The Sims Studio at EA. “The Sims Medieval offers a new way for players to experience The Sims which we hope fans will enjoy, and it features gameplay that fans of strategy and role-playing games will find appealing such as controlling an entire kingdom and quest-based gameplay mechanics.”

The game’s official site can be found here. A (rather exhaustive) description of some the game’s proposed elements can be found below:

The Sims Medieval offers players a chance to build up a medieval kingdom, controlling characters from all walks of life, from Kings and Queens, to Knights and Wizards, Blacksmiths and Bards. It provides a host of storytelling possibilities in the form of quests, from crafting a legendary sword to arranging a royal wedding, to protecting the kingdom from an evil sorcerer, to finding the fountain of youth. Every quest plays out differently depending on which Hero Sim the player is controlling.

The destiny of the kingdom rests in the players’ hands.  Will players build up their kingdom through internal expansion, or perhaps look for a more imperial type of domination, expanding their rule by conquering territories? Will they take on quests in pursuit of fame, or focus on the health and wellbeing of their people? The choice is theirs! With the start of every new game, players will be able to select a new ambition for their kingdom, and embark on a new set of stories.

Everything in The Sims Medieval is crafted to create an immersive medieval world, from the quest-based gameplay, to the medieval objects such as swords and stocks and thrones, right down to the warm look of the characters, and the painterly approach to the world itself.  Players can choose to customize every new Hero that comes to the kingdom, including selecting their traits and their fatal flaw. Players get close to their characters, not only sending them on epic quests, but also making sure they carry out their daily responsibilities such as healing the sick, trading for exotic goods, or forging armor. From having a baby to competing in a royal tournament, what happens to their Sims is up to the player. The time of romance and chivalry is back with The Sims Medieval.

3 thoughts on “The Sims Medieval Announced”