It has been a long six-year wait, but the sequel to the Paradox Interactive original 2003 game, Victoria, has finally returned to the grand strategy scene with the release of Victoria II. Fans of the other Paradox strategy titles such as Hearts of Iron III and Europa Universalis III will automatically recognize the new look that has been so central to the design of the Paradox strategy genre of recent times. Like the first installment, the world of Victoria II covers 19th century European history a decade after the fall of Napoleon Bonaparte and the rise of nationalism, liberalism, colonization, and, of course, industrialization. From the years 1836 to 1935, players are able to select from a wide range of nations that existed throughout the period, including the Great Powers of time such as Great Britain, France, Prussia, Russia, Austria, and the USA. To call this a grand strategy game seems to almost be an understatement since players will have to seriously micromanage a nation’s rise to power through politics, economics, and warfare. 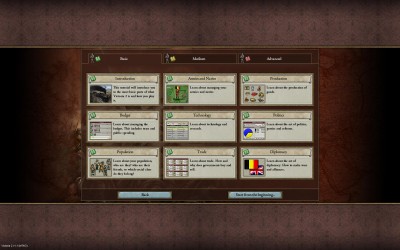 No shame in using a tutorial.

Before you begin the game either as a veteran of Paradox games or a newcomer with an urge to satiate your needs for a more fulfilling strategy game, it would be a good idea to explore the three-tier tutorial. Depending on your level of experience, players may be able to start from the Basic, Intermediate, and Advanced levels. Within this thorough tutorial, the game explains everything from the basics to get those greenhorns started to providing a refresher course for veterans of the intricacies of the in-depth politics, population, production, trade, and diplomacy interfaces that have been revamped in this game. Although reading everything in this mammoth tutorial and retaining the information is really difficult at best, it does give players a decent understanding on how to get started, which many grand strategy games struggle to do.

Once you feel you’ve gotten a good grasp of the basics, it is highly recommended, especially for new players to select a smaller, but industrialized country to practice what you’ve learned before taking on controlling a Great Power nation. If you are wondering if there are any other scenarios besides the Grand Campaign, there are none, unfortunately. Surprisingly, players are pretty much thrown into the thick of it by having to start at 1836 and play through all one hundred years of the campaign. Depending on what nation you play as, this could be an uneventful hundred years especially if you know that your nation will historically be assimilated by a rising nationalistic power. The positive of beginning from 1836 is that you can pretty much choose what direction you’d like to take with regards to your rise to prominence on the world stage. That is the spirit of Victoria II. 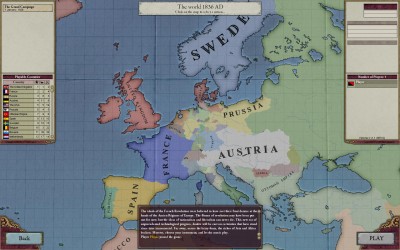 If there is one word to describe the gameplay in Victoria II, it would definitely be micromanagement. One of the things that the game executed well is organizing the various management menus for each aspect of the nation into a navigation toolbar on the top of the game interface without overwhelming the screen with too much information. Each menu contains a breakdown of statistics from political affiliations and the needs of your population to prices of an array of goods on the world market and national revenue from manufactured goods and exports. The game really encourages players to examine each menu as all of the information from each category are intertwined and influence the overall performance of your nation. However, despite the multiple categories, players will find that they would only have to pay more attention to certain ones constantly.

As with every grand strategy game Paradox has developed, money is the first and foremost resource that is vital in keeping the nation going. Naturally, players will have to access the Budget menu to balance taxation, implementing tariffs, and government expenditures in order to make a profit for future use. This is where things could get tricky as depending on the nation, it could get difficult to maintain a delicate balance between the three classes of your population (Poor, Middle, Rich) as there is a huge potential of taxing your people to death that they would not be able to purchase their everyday needs to stay content, which could lead to revolt. However, you will find that if you play as a more powerful nation or even a Great Power, it is a lot easier to balance the budget. 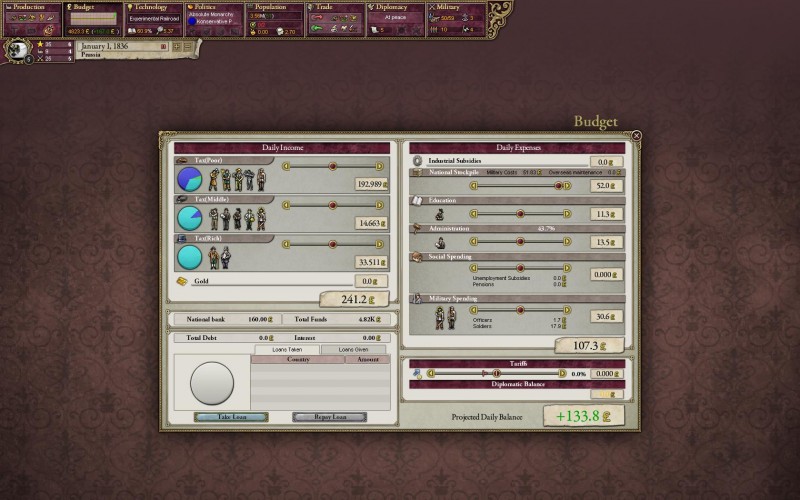 Another aspect that dominates the game is politics. Similar to the first game, Victoria II also gives players a selection of political parties with different ideals and policies that influence the direction and harmony of the nation. As a warning, if players are playing as a European nation, it will definitely be an active political scene with the Revolutions of 1848 guaranteeing to make life difficult. Within this menu are also pie charts detailing the breakdown of political affiliations of your upper house of the legislature and the general population as well as a chart with a variety of social and political issues that they find important. Depending on your system of government and political breakdown, political and social reforms become a very important feature to utilize to appease the demands of the people. In addition, there are also a series of optional goals that, when certain conditions are met, would bring beneficial results to your nation. 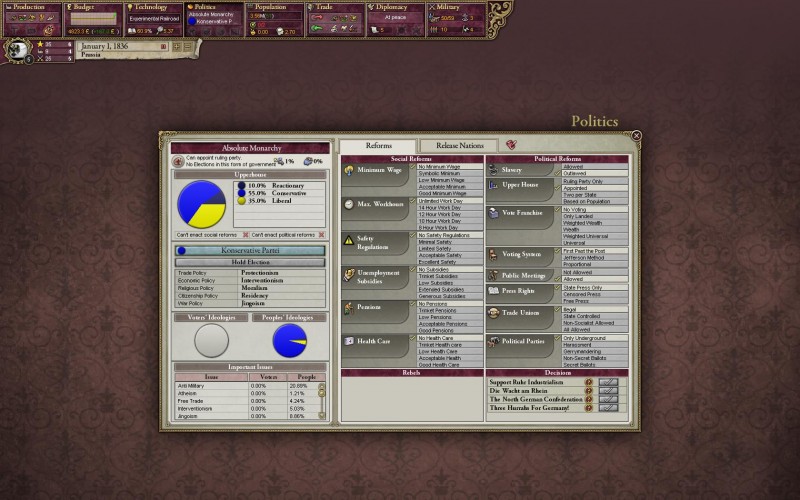 Are you for the people?

Diplomacy is another dominant element that will occupy your attention throughout the campaign, but again, same as politics, it depends on how important your nation is in relation to the global scene, i.e. Great Power or regional power. You will need to monitor your nation’s relations with its neighbors and potential rivals in your quest of global supremacy. You can initiate treaties between nations, do things to make them more friendly toward you, or provoke them to eventually declare war on you. In addition, Victoria II uses a “Casus Belli” system, which affects a country’s reasoning for going to war in the first place. To supplement the new system players are given a selection of war aims to choose from such as gaining territory that contains population that identifies with your culture. If you are a Great Power, it is also important to note the nations under your Sphere of Influence and the encroachments of your rivals on those territories as your spheres could change loyalties due to subversion. You can also counter your rivals’ efforts by ruining their reputation and decreasing their standing among other countries. Of course, they can be doing this to you, too. Gaining new spheres of influence becomes a game within the overall campaign potentially occupying your attention for a long time if you are not careful. All in all, the complex Diplomatic functions you have at your disposal create a varied and interesting pattern of relations around the world, through both war and peace. 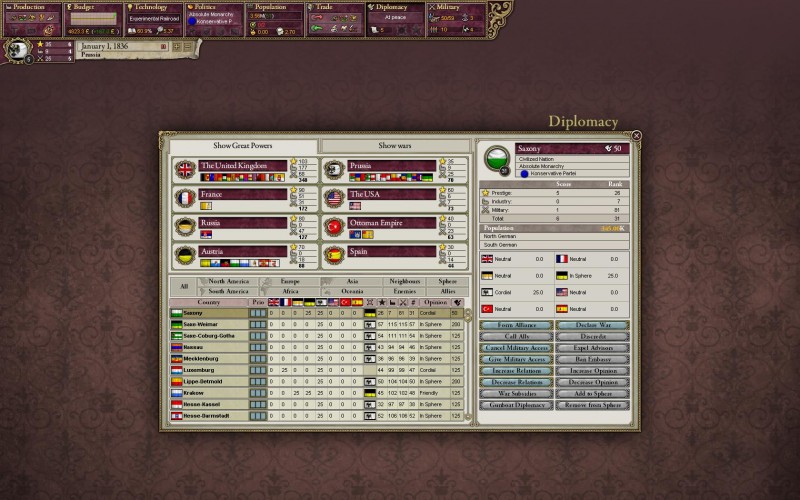 Finally, the last aspect is, of course, warfare. As in other Paradox grand strategy games, combat in Victoria II takes the form of chess-like pieces being stacked in one province and being directed to move into another territory to initiate a combat sequence, which players have little control over. Recruitment depends on how much you’ve invested in defense spending encouraging civilians to join and become soldiers and officers. Although this may seem a disappointment, warfare is a piece of the puzzle to the overall experience and the general emphasis of the big picture. 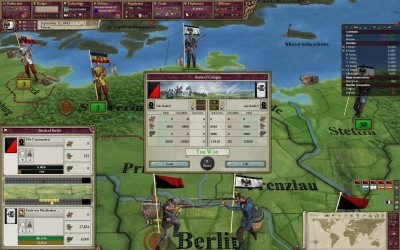 Graphically speaking, Victoria II definitely offers a huge improvement to the first game of seven years ago. The detailed world map is a breath of fresh air to the bland solid colored maps of past titles, but some of the original resource and population icons look like a simple copy-and-paste from the first game, which takes a little away from the rest of the improved landscapes. Historically speaking, the game has historic events that pop up throughout the campaign, some of which may affect your nation directly such as the liberal revolutions of 1848 in Europe to name one. Generally though, you are free to rewrite history as you see fit, one of huge positives of this title. The soundtrack, composed by Andreas Waldetoft, who wrote the soundtracks to Paradox’s previous strategy titles, provides suitable original background music reflecting the style of the romantic period with a touch of royal overtones without directly using actual classical pieces, which was done in the first game.

Paradox should also be lauded for their improvement in the AI as it really does help to cut down on the amount of micromanagement by overseeing other assets in place of the player. However, there are some tweaks that are still needed especially with regards to the building of factories if your government policy that dictates Laissez Faire. The AI has a tendency to construct factories that are not necessarily vital to what your country produces by way of raw materials. Nevertheless, having the AI there is helpful especially for those new to the grand strategy genre.

Overall, Victoria II is a game of acquired taste. For those that are already fans of the series and the genre, this game is definitely worth the time and the long wait. Its thorough tutorial attempts to provide new players with a general grasp of the basics before getting started. Having an AI adviser in form of pop-ups would have been nice, but there are plenty of things to keep players’ attention without constant windows interrupting the flow of the game. The game’s incorporation of all aspects of nation development and the emphasis of relations between these elements prevents one from being the overall dominant focus, which would make the game potentially become a huge bore. For those interested in a more warfare focused strategy game, Hearts of Iron III would be the game for you. 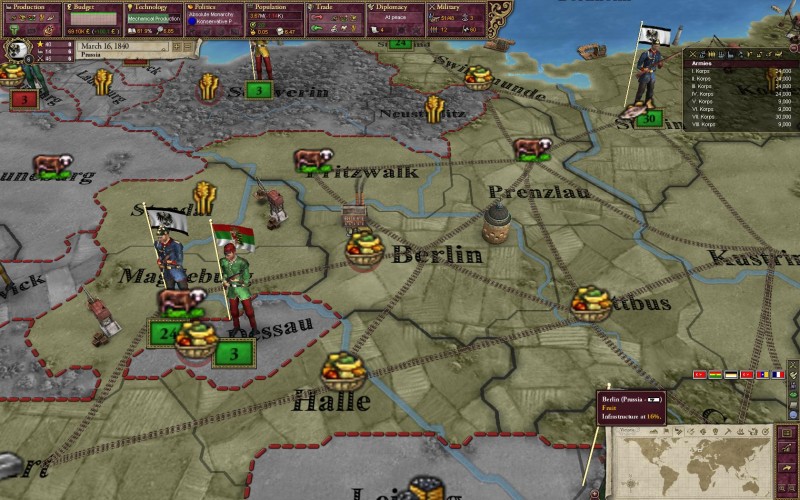 A nice view of the landscape..natural and man-made