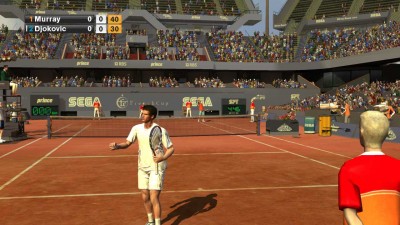 Image is of Virtua Tennis 2009

A long-running series first epically introduced on the Sega Dreamcast, the latest in the Virtua Tennis franchise was recently revealed and was set for a 2011 release. Virtua Tennis 4 is currently only announced for the Playstation 3, but expected also (at least) on the Xbox 360, the game is supporting both Sony’s Move motion control scheme and full 3-D.

“Virtua Tennis 4 is a fantastic example of how our 3rd Party partners are seeing the potential not just in PlayStation Move, but also 3D,” said Simon Rutter, Senior Vice president, sales & marketing at SCEE.  “The combination of both Move and 3D offers an entirely new gaming experience and one that has the potential to completely change how people interact with their entertainment.  Virtua Tennis 4 shows how this technology can be implemented and we are very excited to be working with Sega on this.”

“We have always strived to provide a tennis experience that is both true to the sport and great fun to play, and we are continuing to work with Sony to make this happen”, commented Gary Knight, Senior vice president of marketing at Sega Europe and Sega America. “With Virtua Tennis 4 being developed for PlayStation Move and featuring 3D technology, the boundaries of realism in sports video games are being pushed even further.”