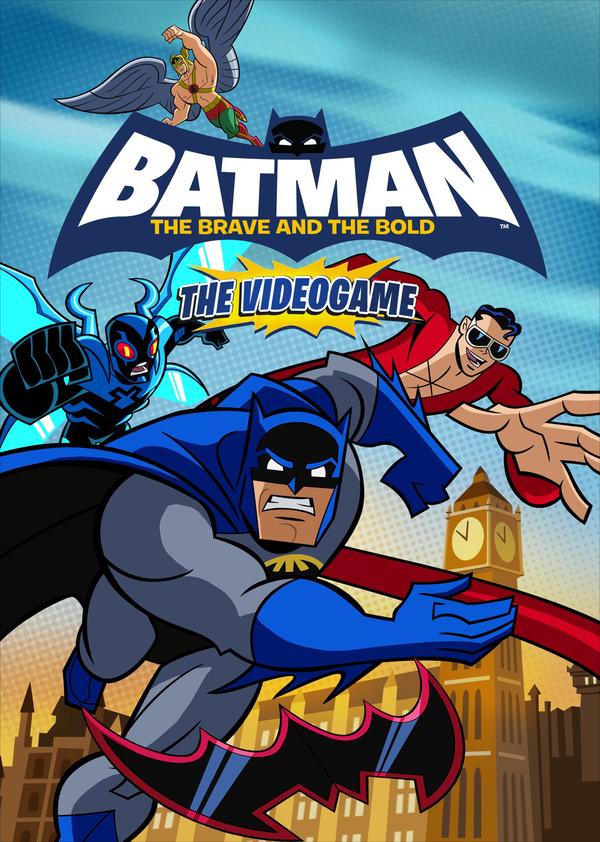 Batman: The Brave and the Bold – The Videogame, which I am going to abbreviate to just Brave and the Bold because it is a really long title, is based on the cartoon series with the same name, minus “the videogame.” Having only seen a couple episodes of the actual series, I did not really know what I was getting into. From what I gathered from the game and from what I have seen, the series is based on a more lighthearted view of Batman and in every episode he teams up with another super hero to defeat a villain. In theory, this seems like a great idea for a videogame. 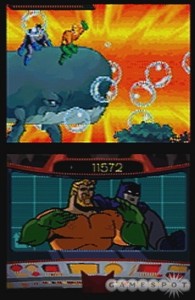 Aquaman can actually be kind of cool in this game.

Brave and the Bold is a 2D side scrolling beat ‘em up. You make your way through the levels as Batman or the other hero that accompanies him, beat up a bunch of enemies, and collect little bat symbols scattered throughout the levels which are used to buy upgrades. Overall it is very straightforward and it plays like a classic 2D side scrolling game should play.

There is no overarching story in Brave and the Bold. Each level acts independently of one another and the only tie in is the fact that Batman goes to the bat cave after each one. All of the mini stories inside the levels are pretty much the same. You team up with a specific hero for that level and try to stop the villain from unleashing his or her diabolical plan. I recognized a few of the heroes like Aquaman, Green Arrow and Green Lantern, but I only recognized a couple of the villains. It might be because I have not seen much of the show, but I figured they would put some more recognizable faces in the game.

I expected the look and sound of this game to be on par with most of the DS’s library, and I was neither surprised nor disappointed.  The soundtrack was relatively generic and uninspired and the voice acting was almost nonexistent, save for a couple of one-liners the characters use whenever they jump on-screen to fight. The graphics were done decently well. The characters had fluid animations and the backgrounds on the levels were nice to look at. The enemies were also surprisingly varied. One aspect I really liked is in most of the levels Batman will go into an area where you can only see his silhouette against the background and you have to fight enemies that way. I thought that was an interesting way to change things up. 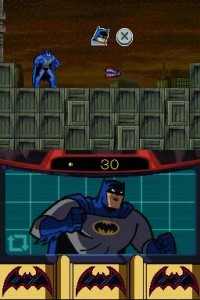 An example of the hint system

Brave and the Bold plays exactly like a classic 2D side scrolling beat ‘em up. At the beginning, Batman can only do a light punch, a heavy punch, throw a batarang and use his grappling hook to hang from some ceilings. However, after each level you have an opportunity to buy upgrades that increase your health, make you do more damage, or give you new weapons. By the end of the game you will have many different weapons at your disposal.

The weapons and character changing are controlled by the touch screen. You use the bottom of the touch screen to cycle through your weapons, and the rest of it is taken up by a picture of Batman and whichever character is accompanying him. To change characters you simply have to touch which one you want to play as. I like when the touch controls are utilized like this because it is not intrusive like it would be if the entire game was controlled by the stylus.

Each level in the game plays about the same. You go from one side to the other beating up enemies and avoiding obstacles. There is a little bit of platforming in the levels, and this is usually where your sidekick comes in. Each hero you team up with has a special move that will help you get through the level as well as their own set of attacks. Some of them are fun and useful, and others you will only bring out when absolutely necessary.

After I finished the first couple of levels, I could tell this game was meant for a younger audience. The game has a hint system that is automatically turned on to hold your hand through levels, but thankfully you can turn it off. Also, once you get a couple of upgrades the game becomes a cakewalk. 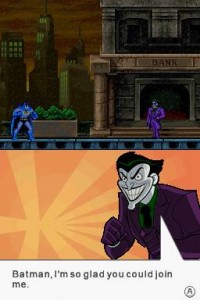 Don't get too excited... he's just in the tutorial level.

My biggest complaint about the game is that it is ridiculously short. I finished the story mode in about two and a half hours. There are collectables, but you will probably find all of them by just going through the levels like normal. You also unlock challenge rooms, which are a little harder than the main game, but those won’t take you more than another hour to finish. These include objectives like beating up a bunch of enemies and a boss rush mode for each level, since most of them have multiple bosses.

I was on the fence about giving this title either a “Worth Renting” or a “Don’t Bother” mainly because of the length. In the end I figured that most elder geeks will breeze right through this game and never give it a second thought, and I don’t think that is how games should be played. It would be a great weekend rental for younger kids, but I can’t recommend it to older gamers.