The heavily anticipated turn-based strategy game, Sid Meier’s Civilization V, has made its glorious return after a five-year wait. Get your two-liter bottle of Mountain Dew and your favorite salty snacks because you will be spending countless hours for this one. For those of you with sweethearts and wives, make your late night excuses with creativity and careful planning as you will be going to bed late. Civilization V is by far, the biggest game in the series as it features 18 civilizations with more to inevitably follow with DLCs. In addition, the game received a new look that utilizes a hexagonal tile system rather than the square tiles of old. In order to draw in new players, the combat system also received a new overhaul allowing cities to defend themselves by shooting at enemies from afar as well as having more detailed military units. 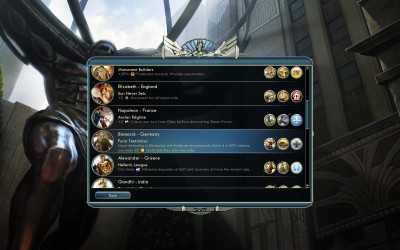 Who will you lead to glory?

In an effort to draw in more casual gamers, Firaxis took the original gameplay concepts back to the drawing board to find a nice balance between the in-depth management so central to the series and making it more user-friendly. Having played Civilization IV, the contrast is definitely noticeable. For one thing, the religion aspect was completely dropped. Another change is in the culture system. The game features ten separate social policy trees that replaced the Civics government system of the previous Civilization. Once you fill five out of the ten trees, you can trigger a cultural victory. This system of cultural progression gives players an option to build on rather than completely switching policies, which is the main difference between the policy tree and the Civics system. Civilization purists would probably be disappointed about the streamlining and simplifying. However, personally I found this to be a welcome change as the learning curve is not overwhelming. 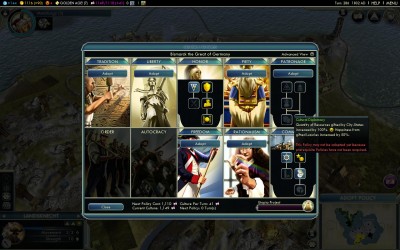 Another hallmark change that Civilization V emphasized and indeed executed well was revising its combat system. As fans will remember, combat wasn’t exactly all that glamorous with minimal unit depth and lack of real, gritty battles with exception of a few explosions and flying arrows. To make the battles more action-packed and appealing, Firaxis increase unit detail as well as improving the fighting animation providing for a more believable war-making experience. In addition, unit-stacking in one grid space was taken out with the exception of having a Great General unit present. This may seem as a disappointment for some as it prevents cohesive movement of armies, but it allows for battles to be drawn out in larger spaces, which the hexagonal system does well. After winning battles, units gain experience points, which allow them to level up giving you options of improving their effectiveness. Of course, going to war isn’t the only way to win in Civ, but the new improvements make it more enjoyable if you are someone who wants to rule with blood and iron. 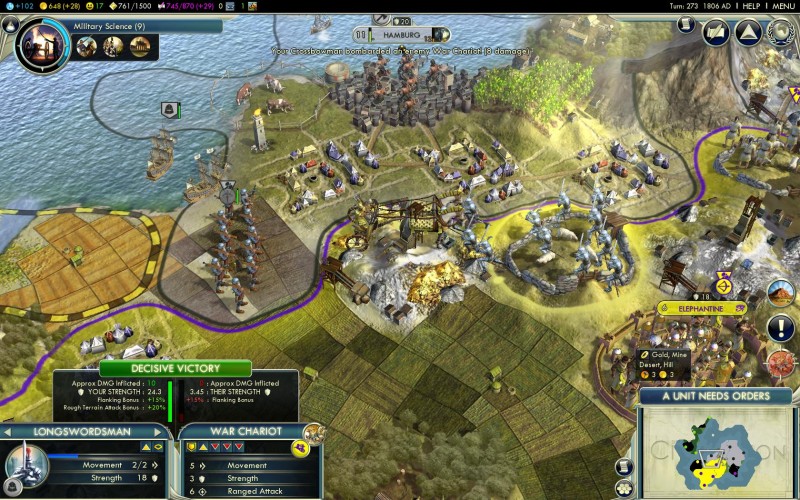 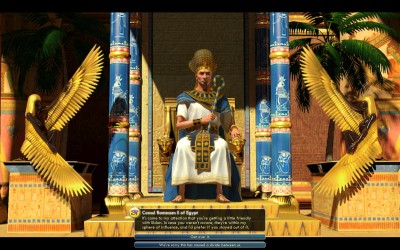 Diplomacy, another major feature of Civ V, also received some modifications. For instance, the ability to trade specific technologies has been replaced with a Research Agreement with a price tag, which promises a random technology to each side. In addition to the main playable civilizations in the game, players will notice individual city-states, which is another new add-on. As part of the diplomacy feature, players will be able to jockey for influence and alliances with these city-states through gifts of gold and completing quests. Once allied, they will generate tribute through random unit spawning as well as luxury resources. The city-states are a nice addition, which provide for more intricate power politics experience.

Despite the changes to the combat system and social policy system, the general gameplay remains pretty similar to the Civilization games of the past. Researching technologies, building and improving infrastructure, and unit recruitment take a certain amount of turns. After generating a certain amount of points, famous figures such as artists, musicians, scientists, and generals will appear granting an instant Golden Age or unique abilities such as free research, landmarks, and unit-stacking for generals. 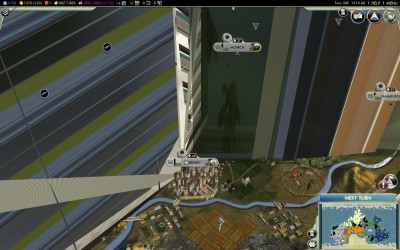 The abyss of graphic pixalation

As characteristic of the series, the soundtrack provides a good selection of orchestrations adding to the overall experience. If you purchase the deluxe edition on Steam, you will be given the entire soundtrack as an incentive. Without being repetitive, the pieces draw upon different style of music representing the variety of civilizations. The graphics of the game as a whole are crisp and beautiful, but they are so amazing that after a few hours of playing, graphic distortion may occur, which can be frustrating. Consequently, you may need to tweak the options a little to get a nice balance without really taxing your machine. Even with a Core i7 2.64 GHz processor and NVIDIA 9800 GTX 1 GB graphics card, the game can really work your machine.

Overall, Civilization V is exactly what fans would expect and rightly so. Its attempt at streamlining and modifying certain aspects of the game offer a great balance of diplomacy, cultural development, scientific advancement, and combat allowing for more new players to pick up and enjoy without spending too much time reading rather than playing. The tutorial offers a great introduction to each feature of the game, providing a nice grasp of the basics without overwhelming newbies from the start. There are also advisers throughout the game that will occasionally pop up with useful suggestions. In addition, the game includes Civopedia, which explains things in detail for those who really want to get their hands dirty with the details. Civilization V has high replay value and with inevitable DLCs on the way, gamers will be occupied with this game for hours and years to come.