The Halo franchise has been the flagship of both Xbox consoles ever since the launch of the original Xbox back in 2001. Today, nine years after the release of the original Halo: Combat Evolved, developer Bungie is handing the franchise over to Microsoft-owned 343 Industries. But before Bungie turns its full attention to its partnership with Activision-Blizzard, a final installment in the series will serve as a parting gift to the hordes of fans the developer has amassed over the years.

Possibly the most prominent console-exclusive title being released this season, expectations for Halo: Reach are high. In fact, Bungie has added fuel to the fire by making it clear that all of the content they ever wanted to put into a Halo title would be perfected, and stuffed in this single game. The game delivers on most of the promises that were made over the past few months, and Halo: Reach clearly rises above its predecessors on virtually all levels. And while the game may fall short on a few aspects, the most critical components are executed flawlessly. 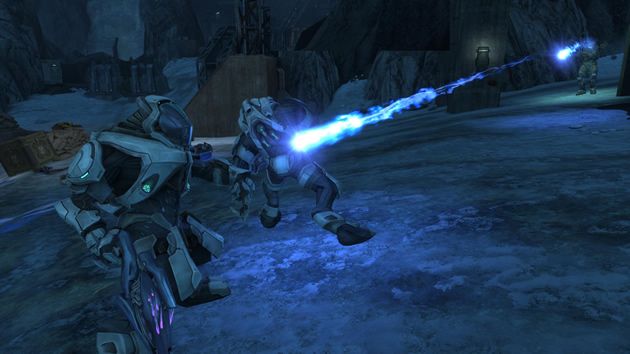 For the first time in the series, the Covenant Elites finally do their name justice. They effectively utilize their high dexterity to flank players and will generally avoid a direct confrontation with Spartans unless they can catch a player out in the open. Their strong AI, combined with the adaptive difficulty that increases their strength as more players join a game, makes it almost impossible to take down a high-ranking Elite with less than 3 players in a 4-player Legendary match.

With respect to the competitive multiplayer component, this most important change from Halo 3 is that many of the playable modes have been streamlined. Rather than containing separate sets of ranked and unranked multiplayer playlists, Halo: Reach contains a small set of general playlists that include all important modes, such as the standard free-for-all, team deathmatches, team objective matches, and large team battles. The newly introduced objective-based game type known as Invasion is a welcome addition, while the highly competitive Arena mode will allow players to play in tournaments against players of roughly the same skill for “Seasons” of one month each.

Besides regular competitive play modes, Bungie also introduced matchmaking for cooperative play modes. Online cooperative play for both Firefight and the campaign were available in previous installments, though users were only able to play these with friends in the past. Firefight matches initiated through matchmaking are limited to a single round of five waves, though matches consisting of multiple sets can still be created as a custom match. At this time, the service offering matchmaking for campaign missions is unavailable, as Bungie wishes to prevent new players from jumping into the story halfway through the campaign. Players who wish to play through the campaign with their friends are still able to invite their friends directly into a game. Matchmaking functionality for the campaign will be made available next month. 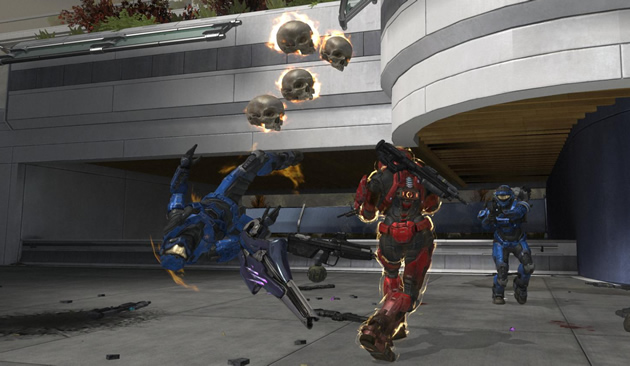 Headhunter, a highly entertaining mix between death match and objective based gameplay, is the only major game type being added to Halo: Reach. However, the extensive map creator / editor that is included in the game will allow players to mix and match game types as they desire.

Though the original Halo is commonly regarded as having laid the foundations for console-shooters in general, the series is normally not considered to be one of the most innovative franchises on the market. Instead, the series is characterised by fast, rock solid gameplay rather than innovation in terms of game modes or gameplay elements. It is therefore unsurprising that Halo: Reach fails to introduce any major innovations to the genre, and in fact appears to take a step back in comparison to features introduced in its predecessors. Despite becoming less and less common in modern games, the health bar is reintroduced after having been removed in Halo 2, while the ability to dual-wield weaponry has also been retired. However, the lack of a dual-wield ability has allowed for better balance between the weapons themselves.

Armor abilities, which replace the equipment found in Halo 3, are possibly the most important gameplay addition to this installment and do a good job of mixing up the action. Prior to spawning onto the battlefield, each player is allowed to pick a loadout with a specific weapon and a unique ability. Each of these sets have their own strengths and weaknesses, and the abilities generally complement the player’s primary weapons well enough to make them effective in combat from the very moment they join the fray, rather than requiring players to scavenge weapons from the map before being able to take other players head on. Effective use of these abilities can turn the tide of a battle, though some abilities have very limited value outside team-based matches. 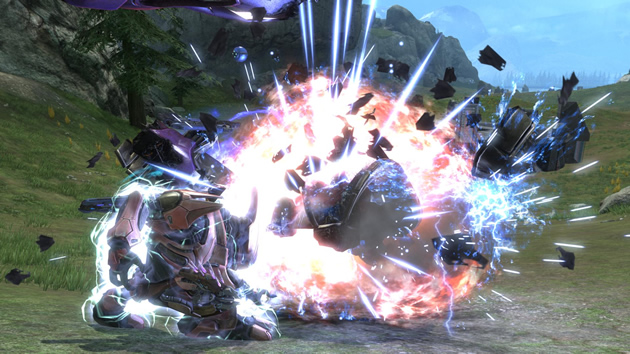 The armor abilities are a great addition to the gameplay. Some abilities, such as Sprint (exclusive to Spartan players), Dodge Roll (exclusive to Covenant Elite players), and jetpacks increase mobility, while others such as active camouflage, Armor Lockup, Drop Shield, and Hologram play significant roles in combat. However, several abilities, such as Armor Lockup, have the potential to allow a player to cheat death in team matches. Armor Lockup, besides rendering a player immobile and invulnerable for a few seconds, also disables vehicles that try to run that player over. Small vehicles, such as Mongooses and Ghosts, are destroyed when hitting a "locked" player head on.

In general, the multiplayer aspect of Halo: Reach forms a perfection of game modes and gameplay elements that have been introduced in previous installments or in other games. The seamless integration of all imaginable modes of competitive and cooperative multiplayer make Halo: Reach a game that may last gamers for years to come.

Unfortunately, while the multiplayer component of Halo: Reach comes close to achieving perfection in the non-tactical FPS genre, the campaign does not manage to fully live up to the hype that has been created in recent months. During the first few missions of Halo: Reach, the game widely misses the mark when it comes to creating an engaging storyline. At this point, the game pales in comparison to the atmosphere created in Halo 3: ODST. However, as the story progresses and the Battle for Reach clearly begins to take a turn for the worse, the members of Noble team begin to show themselves as a team that realizes it may be the final, yet failing, hope of an entire planet.

As the Battle for Reach, during which the events of the game take place, forms a direct predecessor to the events of Halo: Combat Evolved, the story appears to be tasked with tying together some loose ends that may make the overall timeline an easier to understand for most players. However, as the Battle for Reach has been detailed from various perspectives in two of the Halo novels, the game seems to have difficulty in maintaining balance between adhering to existing canon and adding enough story of itself to be able to stand on its own legs. One might expect that this situation would lead to a longer, more extensive storyline in order to compensate for the number of topics that need to be addressed. Sadly, this is not the case. The story clocks in at around 6 to 8 hours and includes so many references to locations, persons, and events that play a significant role in the overall Halo universe, that the story becomes somewhat of a mess. Overall, the “core” of the story is solid, but almost all of the in-canon references will be lost to all except those who are familiar with all of the games AND the novels. Those who are unfamiliar with the overall canon may still find the story of Noble team enjoyable, as the interactions amongst the Spartans and the sense of hopelessness that takes over during the final few missions manage to redeem the campaign. Still, the campaign pales in comparison to the stellar multiplayer aspect of the game. 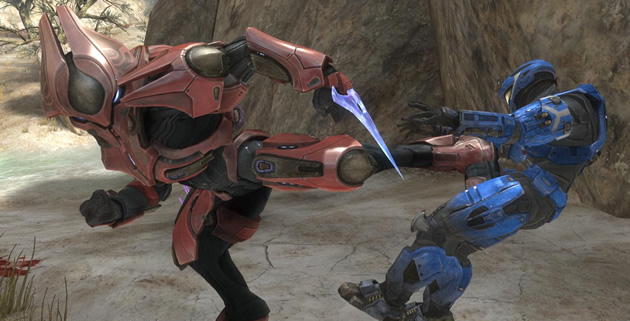 The number of assassination animations has increased since the Beta in May 2010. Furthermore, they appear somewhat easier to pull off and take less time than they did previously, making it easier to use them in combat. Still, triggering an assassination roots the player in place for roughly two seconds. Despite the risk, the animations are so impressive that few players will let an opportunity to assassinate another player go by.

In short, there is an incredible amount of fun to be had while playing Halo: Reach. It offers a wide array of competitive and cooperative multiplayer modes, and due to a fantastic AI and adaptive difficulty when playing cooperatively, both of these aspects have the potential to entertain for multiple months, if not years. The story itself doesn’t quite measure up to expectations and falls short of the level of quality that is evident in all other aspects of the game. Still, the campaign is high-paced and the missions are fun enough to play through repeatedly with friends even if the story itself does not pull you in.

There is almost no excuse to not purchase Halo: Reach if you own a Xbox 360 and enjoy non-tactical shooters. It is perhaps not the “One Game to rule them all” that the hype would have suggested, but within the genre, it comes pretty damn close.

One thought on “Halo: Reach Review”