Around this time last year, give or take a couple of months, Natsume released Harvest Moon: Sunshine Islands, one of the better titles in the series, and in my opinion, the best Harvest Moon title on the DS. Needless to say, Harvest Moon: Grand Bazaar has some big shoes to fill. This entry in the series changes things up from the previous game, but some of those changes might not be for the better. 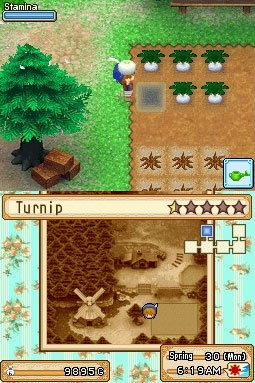 Like the other games in the series, Grand Bazaar revolves around the lifestyle of a farmer. If you want to be successful and make money you will have to tend to your crops and livestock as well as do various things to combine items to sell them at a higher price. It is also a good idea to go around town and make friends with the locals. Overall the general process you will go through day by day does not differ much from previous Harvest Moon titles.

Before I even started playing the game I knew what the story was going to be. You are the new guy running a farm in a small town that has fallen on hard times and it is up to you to make it thrive again. Zephyr Town used to have a bustling bazaar where people came from all over to empty their pockets every week. Now, it is little more than a ghost town probably due to the fact that the only stores around are a guy who sells infertile livestock (you can’t breed cows, sheep or chickens), a guy who sells random metal fragments and a mayor who sells chocolate. It is up to you and you alone to bring the bazaar back to the popular marketplace it once was.

When I started up a new game I saw right away I was not going to like where they were going with the look of the game. The graphics themselves are similar to Sunshine Islands and the 3D is not bad for the DS, but almost all of the characters are very forgettable and lack personality. First off, the main male character looks like he is wearing a pimp hat and for a second I thought it was going to be a very dark look at Harvest Moon. Second, the town is considerably smaller than the one from Sunshine Islands. It consists of only about four areas you will run through on a regular basis, which gets boring pretty quick. Last but not least, I never really memorized the characters’ names because they were so bland and I did not really care about any of them, which made the whole friendship aspect of the game seem pointless.

Unfortunately, the audio was not much to look at either. The music did a good job of staying in the background and not being overly oppressive, but it was nothing spectacular. The game really takes a turn for the uncomfortable when it comes to the sound effects.

Here are a couple examples. In this game the main character can do a double jump for no feasible reason whatsoever. Every time he does he says “Hey!” on the first jump and “Ya!” on the second jump, so it sounds like a tone deaf child trying to sing Outcast. The second example, and this is the big one, is the sound effects for the other characters in the game. When you talk to some of them they feel the impulse to hoot and holler instead of actually talk, and when some of the female characters do it, they sound like they are in something a little more adult oriented than a DS game rated E. I never played the game in public, but I’d imagine if you did you would want to keep the sound turned all the way down.

The core game play in Grand Bazaar remains largely unchanged from its predecessors, which means farming is your main source of income. To farm you need tools, seeds and preferably some animals. All of these can be acquired through the various shops around town and in the bazaar. The game still goes by four 30 day seasons and during every one of those days you will tend to your animals, water your plants (unless it is raining), and harvest your crops when they are ready. However, there are a few changes to this formula.

The largest change by far is the addition of the bazaar. Once a week the town holds a bazaar and this is your big opportunity to sell your wares. This means that there is no shipping crate that gets picked up at the end of every day, and that you have to live off the money you make at the bazaar for the next week, unless you want to be ripped off by selling your stuff to the local store in town. You can also buy stuff at the bazaar that you cannot buy anywhere else, such as tools, certain seeds and cooking supplies. 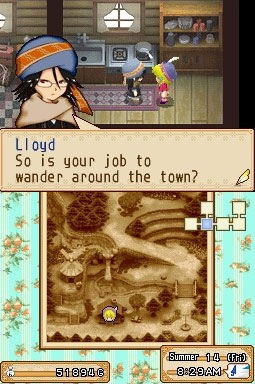 Every time there is a bazaar there is a set amount of money you have to make to advance to the next bazaar upgrade. Upgrades mean more shops for you to spend money in (upgrading the size of your own stall is a different expense entirely). At first this seems like a fun and difficult challenge, but unfortunately there are ways to buy things cheap, combine them and sell them for a ridiculous profit, essentially breaking the game.

Another big change is the use of windmills. In the town there are three different windmills that do different things. One combines items, one upgrades items, and one breaks items down. The speed at which these items are created depends on the wind speed that day and whether or not you want to blow into the microphone to make the windmill go faster.

While this is not necessarily a new thing, there was one change that really bugged me. In Grand Bazaar every item has a quality rating and if one item is higher quality than another it will not stack in your very limited inventory. I found myself struggling to keep as many items as I could, but I still had to get rid of a lot of stuff in order to make room for valuables and tools.

While some new things have been added, some old aspects of the game have been taken away. Upgrading your house is no longer a goal to strive for since practically everything is already added on. There is no more mining in the winter, which is unfortunate because I always enjoyed that aspect of the game. The largest and strangest change is the fact that you cannot breed your animals. All of them must be purchased at the bazaar and you can’t even leave a chicken egg to hatch. Overall the subtractions from the overall formula take away from the experience.

When you’re not farming you are running about town stalking the townspeople. This process works exactly the same as it always has. To make friends with them, and to get the eligible bachelors and bachelorettes to fall for you, you have to talk to them and give them gifts every day. Even though this part of the formula has not changed one bit, I still think it is funny that this practice is socially acceptable in the game, but in real life it would probably get you a restraining order. 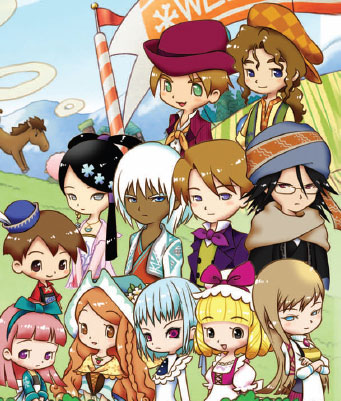 Too bad you're not going to want to make friends with any of them.

While the overall game play and the additions are fun, there is one fatal flaw this time around. The flaw is that the game moves way too slow. The game goes by in 24-hour days, and each minute of the day is represented by one second in real time. Almost every day I found myself finishing everything I had to do by noon and waiting around doing nothing until around five so I could water my crops again to make them grow faster. I tried fishing and foraging, but the time still moved incredibly slow. At one point I put the game down to do something else and I don’t think that should ever happen. Also, to complete the game 100% you have to play well into your fourth year and that sounds like absolute torture.

I hate to say it because I really like this series, but Grand Bazaar fell short of the mark. The bazaar was a great idea, and the farm management is still a lot of fun, but the bland characters, unnecessary subtractions from the game, and the extremely slow pacing made this title feel more like a boring day at the office than a fun handheld experience.