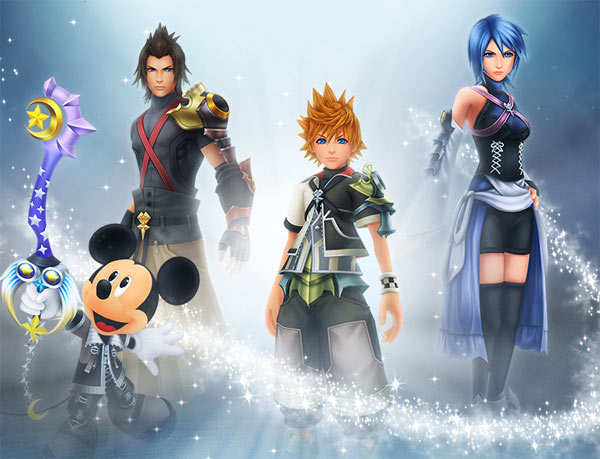 With games on both the Playstation 2 and the DS, the Kingdom Hearts franchise now moves onto another system, the Playstation Portable. Kingdom Hearts: Birth by Sleep is a prequel to the series. It follows three new characters trying to find each other across many different worlds based on various Disney films, and boasts an updated battle system and a few other new features that set it apart from the other games in the series. Most importantly, I was happy to see that Birth by Sleep went back to a free roaming style of game play, rather than a mission based one. 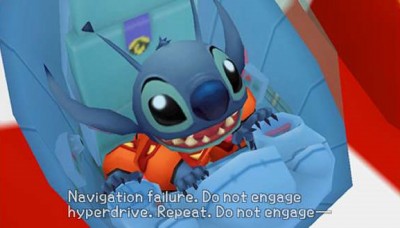 Birth by Sleep is a pretty standard action RPG on the surface. There are three characters to choose from and each of them represents one of the archetypes that RPG players are very familiar with: warrior, rogue and mage. As you progress through the game you will fight enemies to level up and get new items and weapons along the way. However, there are a few things that make this experience a little deeper than your run of the mill action RPG.

This time around you follow the stories of Ventus, Terra and Aqua, three keyblade wielders trying to become keyblade masters. The story is very reminiscent of Star Wars because there is essentially a light and dark side when it comes to using the keyblade. One of the three protagonists ends up being tempted by the darkness and it is up to the other two to go find him. This might sound like a simple plot, but as you progress it gets deeper and there are some interesting twists along the way. The only thing I would not recommend is playing this before the other Kingdom Hearts titles, because if you do not know who the characters are some of the surprises will not be effective.

When it comes to the overall look, Birth by Sleep is a mixed bag. On the upside, the actual character models look great. The main characters as well as the supporting cast are detailed and vibrant, and the unversed, the enemies of the game, look kind of like the heartless, but with enough variety to keep them unique. On the downside, some of the locations you visit are pretty lifeless. You will sometimes find yourself going from a large world with plenty to explore, to a world with only a couple of areas (like the Olympus Coliseum) and that can be pretty disappointing. There can also be some slowdown if there are a lot of enemies on the screen, and some decently long load times, especially if you do not install the data onto your memory stick. 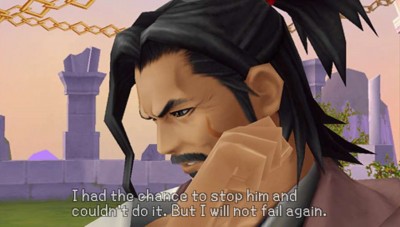 One interesting thing about the graphics is in the options menu, you can change the color count and the CPU speed to make the game look better and run smoother, although it is recommended that you plug the AC adapter in if you choose these higher settings.

When I watched the opening scene in Birth by Sleep, I was disappointed to hear a recycled song and thought that the whole soundtrack was going to be from the PS2 titles, like it was in 358/2 Days. Thankfully, there are some new songs in the game and the rest of the audio more than makes up for the partially recycled soundtrack. The voice acting is done well throughout the game for all of the characters and it really draws you into the story.

Where Birth by Sleep really comes together is the game play. First and foremost, it is a free roaming title and it does away with the mission based system from 358/2 Days. Each level has a number of treasure chests and other collectables to find, and at save points you can choose to go back to the world map and revisit places you have previously been to. This is beneficial because some of the treasure chests contain good skills you can equip to your characters. 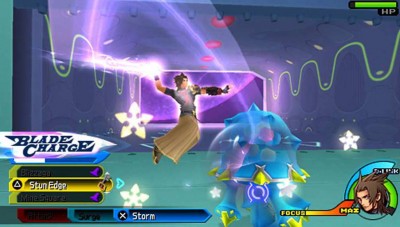 One of the many different attack styles you can get.

The most impressive aspect of this game by far is the combat. At first it seems like it is going to be exactly the same as the other Kingdom Hearts games, but some new features makes it very unique. After filling up a combo bar by attacking enemies, you can perform a finishing move that can be leveled up as you progress through the game. However, if you cast magic or use special moves that finishing move can change into a completely different and much more powerful attack style. For example, if you cast thunder spells while attacking you will go into a style which makes your attacks much more powerful and adds lightning to them for a limited time. There are many different styles you can discover and each one has a different, but very powerful finishing move.

The downside to the combat is the camera and lock on system. While it is a good idea to press both shoulder buttons to lock on to an enemy, some of the enemies teleport often enough to make locking on to them rather useless. Also, when you are locked on the camera will sometimes focus behind the enemy instead of behind you which can be pretty jarring if it happens in the middle of a battle. 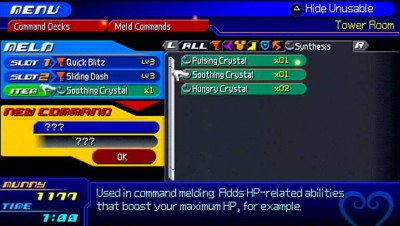 Another significant change from the previous titles is the magic system. To accommodate special attacks that are not necessarily magic, the MP bar is done away with and replaced with a cool down time for all of your spells. Also, the menu is set up a little differently. Instead of different choices for attack, magic and item, the X button is for regular attacks and the menu on the side is exclusively for your special attacks, magic and items which you cycle through by using the D-Pad and use by pressing the triangle button. These aspects, plus the powerful attack styles make magic extremely useful in Birth by Sleep, which is great because I hardly ever used anything but cure in the other titles.

The last noteworthy change to the battle system is the ability to combine skills. Once you level up skills you can combine them with others to make brand new moves and more powerful spells. You can also attach some items to the new skills that give you benefits like increasing your combos or doing more elemental damage and once you level the skill with that benefit all the way you keep the benefit permanently. This is very helpful and gives a good incentive to make the skills rather than just finding them in treasure chests or buying them from the moogle store.

Speaking of moogles, let’s talk about what makes Kingdom Hearts what it is: the Disney characters and Final Fantasy cameos. Besides the moogle, there is only one other Final Fantasy character that I found and that is disappointing, but at this point it looks like the series has progressed into a more Disney focused game with other unique characters in it. All of the Disney characters in the game are great, and what makes them even better is that you interact with them, unlike in 358/2 Days. It is definitely more fun to be part of the universe than watching from the sidelines. 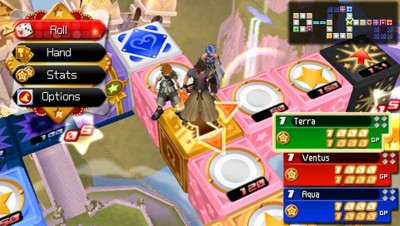 The Command Board mini game

In addition to the regular game play, there are also some mini games. There are a few smaller ones in one specific world you visit, but the main one is called Command Board. After finishing each world, you unlock its command board, which is a game similar to Monopoly and it is used to level up your skills. Overall it tends to take a while to finish one game and it is more fun to fight enemies to level up than play a board game with AI characters. As for the other mini games, they are generally forgettable, and most of them take about two minutes longer than they really need to.

While most people will probably buy this for the single player, there is multiplayer as well. Players can link up and play against each other, or play co-op against enemies or bosses. You can also play the Command Board game with your friends. While this can be fun for a little while, the single player is definitely the focus of this game.

I am happy to say that Birth by Sleep is a great addition to the Kingdom Hearts series. While it suffers from some bland environments and some lengthy load times, just about everything else the game has to offer makes you want to forget about those problems and still play. The story is a classic light side/dark side tale with a few tricks up its sleeve and the characters really bring it to life. The combat is what really shines and there is never a dull moment, especially when it comes to some of the later boss fights. With three separate stories to play, and some bonus content after those are finished, Birth by Sleep is a very fun game that will keep you busy for a while.