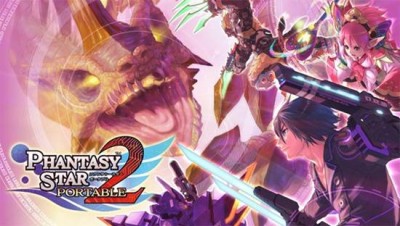 I have never felt that our review system at Elder-Geek was flawed until I sat down to give my review for Phantasy Star Portable 2, the second attempt at a cooperative Phantasy Star title on the PSP system. I find myself elated by certain aspects of the game but can’t help but weigh in on the numerous failing intricacies. If you’ve played a Phantasy Star title in the last 10 years you know exactly what to expect. It’s an action RPG with psuedo-MMO styling and an emphasis on item collection and weapon development. If that sounds great to you, then you can stop reading here and head out to buy a copy of your own, otherwise you may have some real thinking before you make your decision. 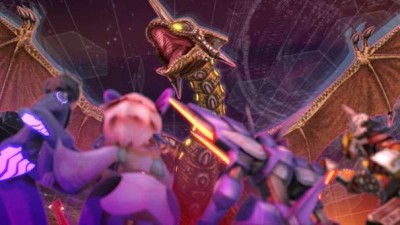 Yes, De Ragan is back. But this time he's actually really hard.

PSP2 hinges on its mission styling. All of which are essentially based off of the, “walk through this generic labyrinth of similar level texturing until you reach the boss” handbook. In each of these levels you will encounter waves of aggressive enemies that continually assault you and your party. This is where the game excels. PSP2 has revamped the combat system from the original and created a satisfying experience. A dodge roll and shield have been added which infuses a bit of strategic gameplay into the usually bland Phantasy Star combat sysytem. In fact,  some harder enemies will require these deft maneuvers to survive the battle. PSP2 has a huge selection of weapons and multiple battlements can be taken into the field at once. This paired with a rythm based stiking system makes altercations anything but boring. In fact, from a strictly combat sense, this game is much better than any other Phantasy Star titles to date. However, the camera is so buggy and the lock-on system is so rigid that you will often find yourself stumbling blindly thought some battles and dieing needlessly.

Phantasy Star Portable 2 offers two distinct modes: story and multiplayer. This is where the polarizing experience occurs. This is where you will decide whether you love this game or absolutely hate it. Allow me to elaborate. 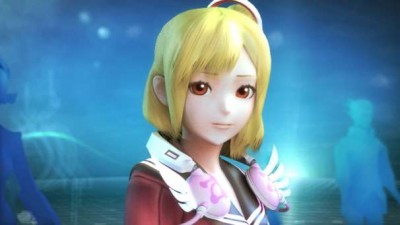 Most of the Sory Mode revolves around you babysitting this girl, and she like to talk...a lot.

The story mode is the trite Japanese affair. Anime characters run about following some incoherent goal that you will never truly care about. SEGA has added quite a bit of dialogue, which is presented with statically drawn caricatures of the speakers and scrolling text. These sequences seem to go on ad-infinitum and it is sad that we still must face this lackluster delivery system.  When you finally arrive in a mission, you will find yourself scrambling about with your brainless AI followers who only perform marginally better than two wooden logs tied to your legs. These well painted slabs of wood will not fool the enemies either. Even if you stand motionless in the background, your adversaries will slowly lumber toward you while completely ignoring the flurry of attacks your allies are dealing. As such, playing as a Ranger (Gun User) or Force (Magic User) is rendered almost impossible until you grind up enough levels to start dealing major group damage. It’s a shame since the combat system is so successful.

Let me say that the online for this game is fantastic. It is one of the few PSP games that will allow you to simply connect to your local WiFi and play online with up to 3 others. The lobby system is well designed and the game suffers from almost no lag. Also, with more human companions the monsters will operate off of an agro mentality. So all you Rangers and Forces will be able to play your roll with improved efficiency. Many of the lock-on and camera issues dissipate as well with competent partners at your side and you will find yourself less running wildly away from enemies and more focusing on actual combat. I was even able to create a pretty robust set of quick text phrases that you can call on the fly or set to activate on conditional events which allievates the need for a mike. I must say that I can only hope this system is copied in the future for other titles and used to it’s fullest because this games online play more than compensates for its shoddy single player. So why the don’t bother rating? Well, unless you actually know some other people willing to buy the title you may not want to even bother with the online. The community moves so fast that as your reading this most of the people you will encounter are already level 60 or higher. Without having a dedicated group of friends you will might be left in the dust very early on. 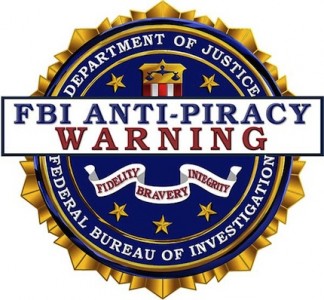 THIS IS A DRM WARNING

Also, it is important to note that the game features a very particular piece of DRM. Much like that of EA and THQ, SEGA has put in an online code that you must enter into a Playstation Network account in order to play online. I repeat, YOU WILL NOT BE ABLE TO PLAY THIS GAME ONLINE AT ALL WITHOUT THE ONE-TIME CODE IN THE PACKAGE AND A PLAYSTATION NETWORK ACCOUNT. That means you CAN NOT buy this game used and expect to play online unless you are willing to shell out some extra cash for the online code and are willing to set up a network account if you are sans one. Deal breaker? Maybe. Fair? Yes.

So here’s the deal. I liked this game, I really did. I not only found it to be a definite step up from its predecessors but also an extremely fun online experience. I thought about throwing a “BUY” rating on it and calling it a day, but I was already a fan to begin with and had 2 others willing to share the journey with me. The Phantasy Star series is based solely on the nostalgia of Phantasy Star Online for the Dreamcast. Because of this, it is extremely difficult for someone who wasn’t there to really give a damn about the series. The game is not friendly to outsiders and I simply can’t recommend it to anyone but those who have prior experience with the series or have a few friends willing to take the plunge. For those that pertains to, you will have a great time with PSP2. For those whom that statement neglects, this is a title you may just want to pass on.