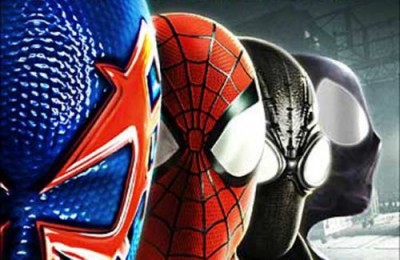 Spider-Man has had a tumultuous relationship with the games industry. For every fulfilled expectation like Ultimate Spider-Man (2005) or surprise like Spider-Man 2 (2004), there have been major disappointments like Spider-Man: Web of Shadows (2008) and…well pretty much everything else. While long-time wallcrawler fans might not like Activision’s lack of faith in one Spidey being capable of holding an entire game, the four-dimensional personalities brought forth allow for some much-needed variety in both the visual and gameplay departments. While it fails to eclipse the greatness of Peter Parker’s previous exploits, let alone Bruce Wayne’s, Spider-Man: Shattered Dimensions is a solid action game with a lot to offer gamers both inside and outside the fan base.

With four different Spider-Men come four different gameplay styles. They would have to be, to balance a story that’s more quips and banter than narrative and plot. Players will have their time split evenly amongst the Amazing universe of traditional combo-attacks, the  more dynamic and fast-paced 2099 universe, the adaptable Ultimate universe, and the stealth-focused Noir universe. The core components of the character make their way into each universe: web-slinging, basic attacks, and special attacks – and all control responsively, given the odd hick-up – but each universe smooths out the flow a bit with additional objectives. 2099 has a couple of halo jumps, Noir has you shadow-slinking, etc. All levels lead to a fight with a boss that finishes in a first-person boxing take-down. Dividing the game up this way turned out to be an excellent decision, the game feels like it’s consistently moving forward and is peppered with enough supplemental objectives to keep the routine fresh. While individual components may not stand as strong on their own, the full game exhibits a lot of flexibility because of its intentionally fragmented nature. 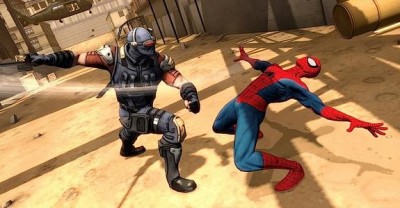 Amazing Spidey is action-packed, but linear

Amazing’s universe tends to web-shoot itself in the foot a bit, with its linear and straightforward level design hampering most of the thrilling effect of web-slinging. But its basic combo-attack structure provides enough balance and personality to suit most gamer’s needs. It’s not as deep nor as fluid as the high marks of the genre, but it’s certainly entertaining enough for its run-time. Ultimate and 2099 are where twitch-gamers will get the most fun, as combat is less God of War and more Devil May Cry, sacrificing the feeling of strength as you dedicate each beating for a more wicked bad-assness is you flit about your opponents with speed and finesse. Both dimensions make good use of each unique suit, with the clawed and animalistic 2099 outfit leading to more rapid fire assaults (the fluidity thankfully translating to the could-be-but-not frustrating halo jumps) and some time-slowing super-hurt, and the famous black symbiote suit in Ultimate having a temporary rage mode making your attacks unblockable. Both worlds also incorporate a more vertical level structure, allowing a bit more freedom of movement in each battle. All dimensions have individual level mini-objectives that reward completion with upgrade currency to fill out each Spidey’s arsenal of powers, and are entertaining enough that those on the replay edge may dive in a second time.

Noir comes off as the most mixed in terms of quality. Thankfully the ebb and flow of the game allows for some acclimation time between intense hand-to-hand and silent shadow

stalking, but the levels still lose a lot of momentum with their slower pace and occasionally frustrating requirements. It’s here that the camera rears its most ugly habits as well. While a tolerable hindrance in other stages, wall-crawling (especially around rooftop edges) will likely send the camera into a gyrating fit that nips most attempts at surprise in the bud. Enemies, while dumb, alert large portions to your presence at even the slightest mistake, and can take down your comparatively vulnerable super-hero with irritating speed. Despite all this, the web-takedowns function almost as good as in Arkham Asylum. It’s just a shame that the most aesthetically appealing moments of the game are also the most handicapped. 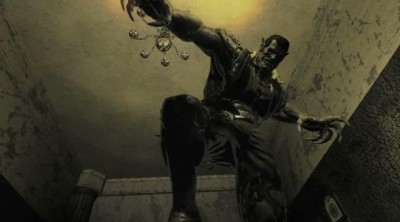 Why yes! This IS highly suggestive!

The quality of the boss battles is highly variable. For every well-designed and enjoyable fight with Sandman or the Green Goblin, there is either a routine bout with the Scorpion or a repetitive encounter with Hammerhead. Deadpool, yet again, marks one of the highlights of the game with his appearance, only furthering the notion that this sociopath needs his own title, now. Regardless of how you feel about whittling down their health, the final exchange of fists is universally sticky. The first-person finishers are mediocre, and like in many other games where they make a sporadic appearance, go against some essential character traits. Granted, the lack of obtuse blood-spurts keeps the realization down, but to have a conflicted teenage superhero wailing on the head of his opponent may strike even the most casually interested true-believer suspicious. Not to mention the controls are ham-fisted at best.

Ultimate Spidey is varied and vibrant

While far, far below the graphical high water mark of this generation, Shattered Dimensions pulls of four distinct styles extremely well in an era of gunmetal gray and dirt brown. The cell-shaded graphics of Amazing are some of the best ever seen, the fluctuating tint of Noir gives a very fitting filmic effect, and the more traditional, if comic-book-ized visuals of Ultimate are bright and splendid. 2099 goes with the “Blade Runner” future, but due the shiny sheen that’s painted on, the constant and obtuse visual stimuli can get a bit overwhelming at times. Still, boss designs are impressively detailed and blend in to their respective universes with ease, and Spidey’s combat animations are all sharp and distinct. Web/Symbiote effects also put forth an impressive display. The more-routine-than-should-be-acceptable glitches and pop-ins will definitely frustrate, especially if encountering a game-freezing one similar to ours, but the visual package does the best with the engine capabilities it was dealt. Voice acting is superb throughout, with each dimension coming packed with its own Spider-Man voice talent. 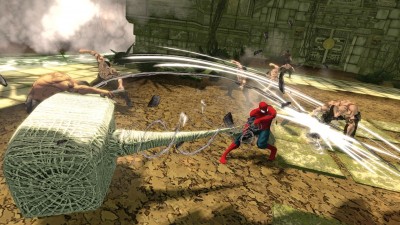 The web effects appear quite sophisticated, and look awesome because of it

Spider-Man: Shattered Dimensions is a surprisingly fluid and varied action title that is definitely along the lines of what Spidey fans have been asking for (even if it is just for the excellent utilization of the under-used Madam Web). At a standard action length of 12-15 hours and with limited replay value, its difficult to recommend its occasionally schizophrenic camera, awkward stealth mechanics, and graphical failings for a full purchase outside the Marvel fandom, but it is definitely one of the best rentals of the year for those not keen on spending $60 on Spidey. Maybe, if this sells, we can go back to relying on one Spider-Man to save the universe. And yes…Stan Lee’s in the game.