“Child’s Play is a charity that gets toys and games to sick kids.” Mike Krahulik, Child’s Play Co-founder.

The video game industry has been fighting a losing PR battle for decades. The street opinion – outside of its usual demographics – still conceives it as pointless, possibly harmful, diversions particularly made for children. Compounded by media scapegoating or hopelessly irrelevant allusions to Pong made by oblivious news personalities, and its hard to convince any non-gamer the value of games. The idea that games are not negative influences, let alone hold the potential to be positive influences, are lost under talking points and talking heads.

Up until 2003, it was hard to argue the sociologically advances of the medium without a technical degree or eidetic memory of programming philosophy. Charities and research labs had existed for many years prior, but never garnered the marketing-friendly numbers or face-time the industry was desperately searching for. Springing from the most unlikely source – a web-comic – the answer came in the form of Child’s Play, a donation service that requests and distributes various video game products to children’s hospital wings and specialized care facilities.

“When you’re sick and in the hospital and lying in bed, the age appropriate thing for you to do is…to play video games. To be able to give them something back that they are good at, it’s a beautiful thing.” Jen Usinger, Child Life Specialist at Legacy Emanuel Children’s Hospital in Portland, Oregon.

One of many brainchilds of “Penny Arcade” founders Jerry Holkins and Mike Krahulik (also known by their comic personalities Tycho and Gabe, respectively, and are also currently juggling two conventions on opposite coasts, and the second season of a  reality show), Child’s Play has become the de-facto trump card pulled out when any conversation turns to a negative view of video games and their players. The organization arguably started as a direct response to a misguided article released on Heraldnet, simply called “Violent video games are Training Children to Kill,” and was announced formally on November 24, 2003. The original intent was a direct challenge to the “Penny Arcade” viewership, to see if a grassroots movement could change the medium’s public image.

“The first year of Child’s Play was quite different than how we work now, it was basically just a toy drive were Gabe and Tycho had said ‘Mail us toys and we’ll bring them to the hospital’. Not a whole lot of thought had gone into the logistics of it, and it was chaos because $250,000 worth of toys ended up in Gabe’s garage…we knew that the community was generous, but we didn’t expect that much generosity all at once…it was pretty amazing.” Kristin Lindsay, Foundation Coordinator.

Child’s Play now functions primarily as a donation hub, in partnership with online retailer Amazon.com, with 100% of the proceeds going to the effort. Charity volunteers set up individualized wishlists for specific hospitals across the company, with users able to purchase items to be shipped directly to the listed hospital. Wishlist items most frequently include game titles and consoles, but occasionally request movies and books as well. Once all items on a hospital’s wishlist have been purchased, the facility is added to the master map of affiliated facilities on the Child’s Play website. Amazon.com also provides a small commission to the hospital with each purchase.  Donations can also be sent in cash via Paypal or check, with the proceeds going to hospital repairs or research. 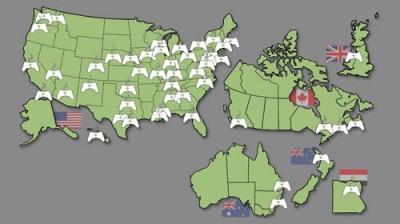 Map of partnered facilities, circa 2009

Child’s Play has also gained supplemental donations of cash or publicity from corporate sponsorships. Ranked on a level system, companies that donate enough to merit the Silver, Gold, or Platinum levels will receive incremental publicity on both the Penny Arcade and Child’s Play websites. Unsurprisingly, many of the most frequent sponsors are companies within the gaming industry; with Nintendo, Midway, THQ, and Cerulean Studios being the most notable contributors. Most of the largest single contributors outside of corporations are seen at the annual Child’s Play Auction and Dinner, one of the regular prizes being an appearance in the “Penny Arcade” web-comic, as well as donated pieces of video game memorabilia and art.

“It’s a combination of the idea and the enthusiastic audience. Those two things together that allow something like [Child’s Play] to happen.” Jerry Holkins, Child’s Play co-founder.

Initially the charity maintained a partnership with a single hospital, the Children’s Hospital and Regional Medical Center, in Seattle Washington (near “Penny Arcade” headquarters.) In less than one month of operation, however, the charity had garnered tremendous support from multiple media outlets, and had managed to raise over $250,000 in the process. Child’s Play expanded operations early the next year into more hospitals in the Seattle area, as well as medical facilities in Oakland, San Diego, Houston, and Washington D.C., and again in 2005 to seven additional hospitals, including three in Canada and one in the UK. Since, the charity has added support for hospitals across the globe including facilities in Australia, Egypt, and New Zealand, as well as more across the United States. 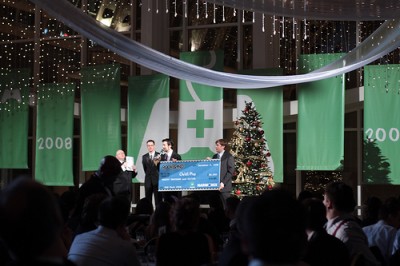 In total, Child’s Play has reported raised over 6 million dollars in either cash or product donations. The movement has seen a steady growth of celebrity support both inside and outside the gaming community, and continues to be the default organization many video game organizations or media outlets support in times of charity. The writer for the original inspirational article was quick  to issue a rephrased statement on the industry and direct apology after the organization’s first year. Child’s Play now reports partnerships with over 70 hospitals across the world, and over 100,000 individual donations since its inception. But at the heart of its success lies a simple goal of easing the suffering of hospitalized youth, as epitomized by the concerns of two gamers longing to burst out an unfair stereotype.

“…negative portrayals of gamers catalyzed [Child’s Play], it made it a necessity…What is true is that we improve lives on a regular basis, and that is a better goal than trying to change the minds of idiots.” Jerry Holkins, Child’s Play Co-founder.