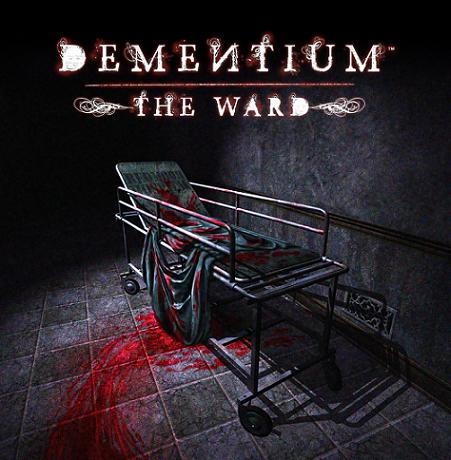 When it comes to the DS, there are slim pickings when it comes to survival horror games. Developer Renegade Kid tries to change that with Dementium: The Ward. Dementium has many of the staples of a survivial horror including dark environments, a flashlight to help you see, and of course some good old-fashioned blood and gore. However, having played the sequel, you might be better off skipping straight to Dementium II. 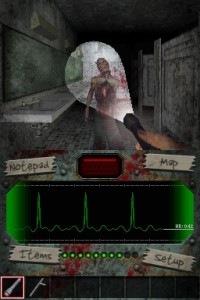 Whoa... you kind of startled me.

Dementium is one of the few first person shooters on the DS for a valid reason: no second analog stick. This is remedied fairly well by the use of the stylus and touch screen as your tool to look around. This game follows your standard FPS formula. Throughout the game you will find new and more powerful weapons and use your starting weapons less and less. It’s not ambitious by any means, but it works when it is combined with a survival horror.

When you first start playing Dementium you will have little to no idea what is going on. You wake up in a dirty, bloody mess of a hospital and your first priority is to get out. Throughout most of the game you will be left in the dark about whom you are and what exactly you did and when you finally do find out there is not much time to react to it. I think the story would have flourished better if more questions were answered throughout the game and if the characters were more fleshed out.

When it comes to graphics, Dementium is a very good looking game given that it is on the DS. The hospital looks very creepy and unique… for the first three chapters of the game. After that just about everything is recycled and you will see the same style of rooms over and over again to the point where you will probably question whether you have been to that particular part of the hospital yet. On the bright side, the game moves very smoothly and there is no slowdown even when you are swarmed by enemies. Also, the enemy designs are rather creepy. 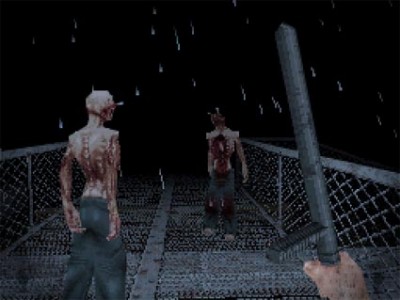 The nightstick will save you ammo, but cost you health.

Like its sequel, the sound design in Dementium is hit and miss. The music tracks in the background set the spooky mood and as you play you will almost start to forget that it is there until it stops completely. The complete lack of music made the game even creepier, until I heard the monsters. At first the sound effects were a nice addition, but after a while you knew exactly what to expect when you entered one of the monster filled rooms.

The core game play of this survival horror game is shooting down monsters and generally trying to get through the hospital alive. Since you cannot wield both the flashlight and a firearm at the same time like you can in Dementium II, you will have to switch constantly. That means you have to get up close and personal to get accurate shots on your target.

While the shooting is pretty solid, the melee combat leaves much to be desired. When I wanted to conserve ammunition I would switch to my nightstick and try to melee enemies. The problem with this is it is very difficult to actually hit the monsters, especially the small worms that nip at your feet, even when you are standing toe to toe with them. So more often than not you will end up taking a few hits to conserve ammo. 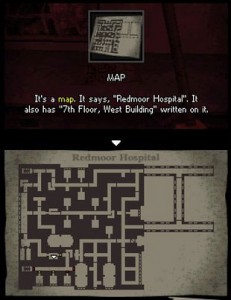 Why couldn't you be on the main screen?

While most of the game is linear, there are a couple of parts where it is encouraged to explore and solve some puzzles, usually to get better weapons. While some of the puzzles are fairly simple, others are pretty ambiguous and do not give you much to go on. Also, when you are exploring you will need to use the map since everything looks the same. Unfortunately, instead of the map being on the bottom screen the entire time, you have to switch back and forth between it and your main screen which can get old pretty quick.

While exploring the hospital looking for items such as keys to open a chest I would run into a group of monsters, kill them and leave the room. Upon returning to that room I would find that all of them have respawned. This made the game somewhat tedious because you already have a limited ammo supply and the respawning enemies depletes it faster. My solution ended up being to just run past the enemies and hope they didn’t get a swipe on me while I was running past them.

However, odds are that they will get one too many hits on you and you will die. For some reason, the game saves after you open every door, but when you die you have to go all the way back to the beginning of the chapter, even if you are at the boss at the end of a particular chapter. This becomes frustrating and makes the game drag on longer than it should (which still isn’t very long).

While I cannot recommend Dementium as a fun, scary game to play on your DS, Renegade Kid fixed many of these problems in their sequel. Repetitive environments, melee combat, enemy respawning, and the save system are among these fixes. So instead of playing through both of these titles, just skip to the second one because it is essentially the same game, but far more polished.