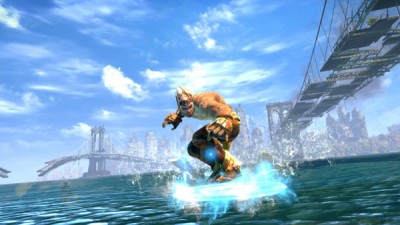 Uncharted meets the post-apocalyptic era as developer Ninja Theory reunites with Andy Serkis to give us Enslaved: Odyssey to the West. Based loosely on an ancient Chinese fable, Enslaved brings two recently escaped slaves together, the strong and agile Monkey and the technologically-inclined Trip that nabs Monkey’s help via implanted slave headband, and forces them to traverse hundreds of miles of mech-infested terrain. Is there enough unique appeal in this title to make a name for itself, or should we have all stayed on the slave ship?

There is no question where Enslaved gets its inspiration. The game plays across an Uncharted split of platforming, combat, and a hint of exploration, with combo-based hack and slash taking over for Gears of War-style popping-and-shooting. Don’t go into this expecting to play as a buffer, shirtless version of Nathan Drake, however. Both the platforming and combat of Enslaved is a much more streamlined experience than its forebears. Movement especially feels simple, surfaces have an obvious shimmer when available for grappling, and levels are laid out in a way as to avoid nearly all possible hick-ups, when not outright explaining the intended path for you in cutscenes. 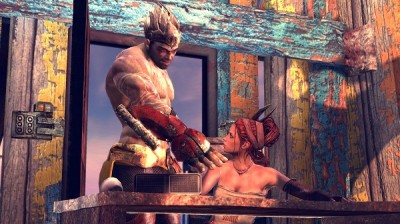 Oddly enough, this is hardly a bad thing, as the game has also removed all signs of faulty ledges blending into the environment or finicky climbable surfaces. While Monkey’s swinging and flipping animations give a strong impression of thrown weight and balance, platforming feels smooth and swift, almost hitting the high point of maneuverability every game has been gunning for since Assassin’s Creed. It may lose all sense of tense distance estimations, but it gains a much sharper sense of progression and character ability for it.

The combat is equally simple, although not quite as easy as the platforming segments. While fighting back waves of reawakening machines is relegated to fewer buttons than action fans may be used to, there is still plenty of combo strings and styles to pull off. Alternating between heavy, light, area, and other attack patterns, the game throws in additional challenge with a large variety of enemy types. More often than not, you’ll find yourself in a position of strategic flexibility, free to either take out the ranged mechs that surround you before isolating the armored lead AI, or to use a flunky enemy as a shield to absorb damage as you take out the ground foes before casually picking off ranged attackers. Coupled with the butter-smooth combat animations and energetic visual and visceral feedback, the childish surface of Enslaved‘s combat yields a much deeper experience. 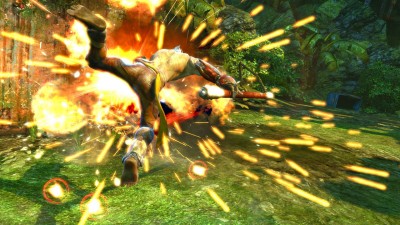 All roads eventually lead to set-piece boss encounters, and while they add an additional layer to the gameplay structure, they lack the expected uptick in challenge and are far from as memorable as they were designed to be. The much more enjoyable diversions from the routine come later in the game as available technology is upgraded. Flying through an environment as a mechincal dragonfly to explore possible platforming routes or speeding along on Monkey’s hover-disc (thankfully even cooler than it sounds) are welcome treats, if the overall point of them is a bit suspect.

A common complaint laid against Enslaved is the lack of playable options for Monkey’s captor-companion Trip, who plays a large role in the narrative despite appearing mostly as a voice in Monkey’s head. Based on our playthrough, we saw the eraser marks of possible inclusion points for Trip, and could definitely see a co-op story campaign being intimately inside the realm of possibility, but Ninja Theory apparently scrapped them before launch. This means either they were unfinished designs that never got the resources needed, or weren’t up to snuff. Either way, it’s nothing that’s missed, despite the fanciful notions that may come to mind.

The most hyped aspect of Enslaved has been, without a doubt, its story. While the ties to Chinese mythology are abandoned after the concept/thematic stage, taken as a video game plot structure, its one of the smoothest and most engrossing narratives we’ve seen in years. Its pacing is second to none, gameplay and cinematics working in tandem to create a constant curiosity of what will befall the seemingly anachronistic duo. Most of audience empathy comes from the elite performances of the motion-capture/voice acting leads, who throw themselves so deeply into every subtle movement, that its hard not to immediately relate. Forgiving the odd hammy line of dialog and the somewhat tantalizing ending, it’s a game that’s hard to put down for all the right reasons. 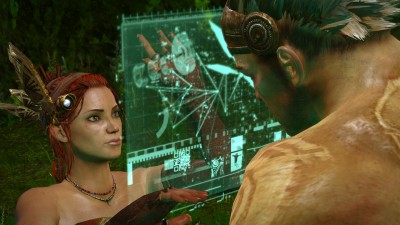 This is the kind of post-apocalypse we have been wanting for a long time. Nature has taken over New York in the interim 150 years prior to Enslaved, and the encountered environments burst with lush and varied flora and fauna because of it. Weather effects and sound design are extraordinarily well implemented, and character body and facial animation blend well with captured performance. Given Andy Serkis’ record in our industry, we wonder why not every game featuring the actor/performer showcases his involvement on the front of the box. The motion capture work on display here is simply stunning, and is left desperately wanting for any suitable competition. It is mesmerizing just how specific and detailed each flinch and twitch are realized, almost to the point of detracting from the experience. But surprisingly apt camera direction helps integrate the best motion capture work we have ever seen into near invisibility. Its so good that its almost heartbreaking when the random pop-in or frame stutter destroys the mood.

Enslaved: Odyssey to the West wears its idols on its sleeves and even manages to put up a good design fight with them. Platforming is simplistic but crisp, combat is insidiously strategic, environments run the gamut from industrial to retaken concrete jungles, and there have never been greater physical performances in any video game…ever. The narrative takes on a lot more character study than most in its genre, and succeeds in delivering an enthralling story that teases the player just enough to carry on into the next chapter. The odd graphical hickup and lax difficulty curve may not be what the more battle-hardened among us were craving, and its ten hour runtime makes replay value practically non-existent, but taken for the roller coast ride it’s been advertised as, you’ll be hard pressed to find any better game out there this year. 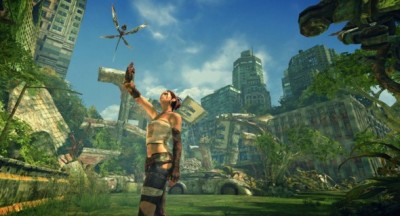