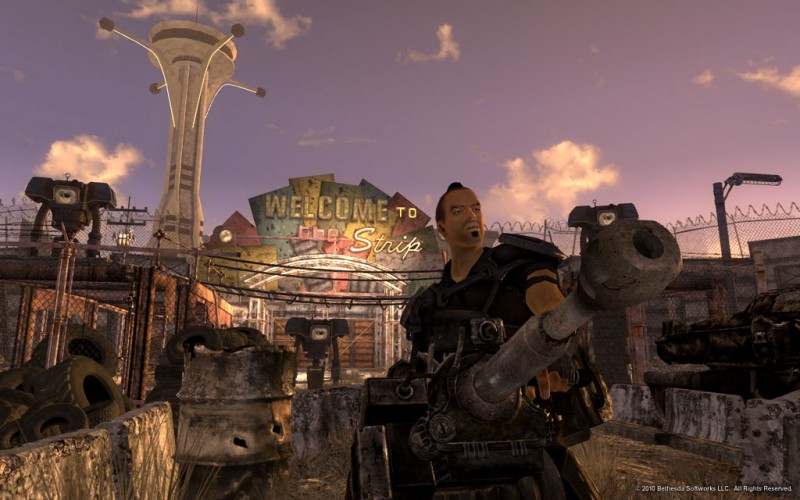 Here we are, thrown into the dangerous wasteland of a post apocalyptic United States yet again, only this time we are in what used to be Las Vegas, Nevada. Set a few years after Fallout 3,  Fallout: New Vegas wants us to forget all about the dreary, destroyed Capital and have fun, gamble and kill your way through the Mojave Wasteland. The Wasteland as well as the Vegas Strip has a much lighter and more humorous tone to it than the Capital Wasteland ever had, and it includes everything from gangs of Elvis impersonators to a group of singers who call themselves “The Rad Pack.” While it has much of the same game play as Fallout 3, New Vegas is a fun experience you will definitely want to go through more than once. 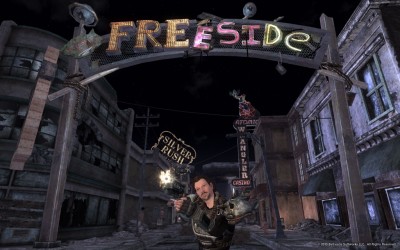 A slum outside of the Strip

New Vegas continues using Fallout 3’s model of a first person shooter game with RPG elements. Players will wield a number of different weapons and gain experience by killing whoever they deem as their enemy. As you level you can raise your stats as you see fit and choose a few bonus perks along the way. However, you cannot be perfect at everything, so you will have to pick and choose your specialties and stick with them if you want to survive.

Set a few years after Fallout 3, the game follows the story of a courier who is on his or her way to deliver a platinum chip, but instead gets ambushed, robbed and shot in the head, and that’s only the beginning! You come to in a rundown town to realize the local doctor has patched you up. Your main objective throughout most of the main storyline is to get the chip back and get your revenge on the guy who shot you. While the plot is very linear for a while, the best part about it is it really opens up in the middle and lets you finish it in a few different ways. The only downside is you cannot play after the story ends, so you have to reload an old save if you want to continue your adventures.

If the main story was the only thing to do in New Vegas you would be in for a pretty short trip. Fortunately there are side quests. Lots and lots of side quests! There are the ones that you will see in the achievements list, but there are so many more that are not represented by achievements or trophies. While some of these boil down to basic fetch quests, others unfold into sub stories that are arguably more interesting than the main plot. 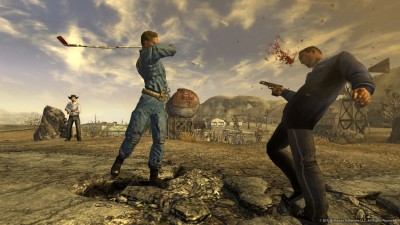 New Vegas looks very similar to its predecessor. The scenery and various locations (especially the Strip) look great, but the people still don’t look too hot. Their animations are usually not very believable and with some of them you can clearly see where the head attaches to the body. However, the Wasteland itself is just as expansive as it was in Fallout 3. There are many locations to discover, including towns, caves and abandoned factories, but they are spaced far enough apart to make it still seem like a desolate place rather than a bustling community. I found myself getting sidetracked many times just to explore a building in the distance or a marker on my map that I had not been to yet.

The most disappointing thing about New Vegas is the overall audio. The first thing you will likely notice is the voice acting. Every now and then it is pretty good, but most of the time it is below par. Some of the characters sound bland and lifeless, while others do not seem to know how to pause at the end of a sentence. Even Mr. New Vegas, the Three-Dog of this game, got on my nerves after a while. Speaking of the radio, I had to shut mine off after a couple of hours. I heard the same songs over and over and in the end I opted to listen to the ambiance music over the radio because of the lack of music.

There is so much content in New Vegas and it would be impossible for me to list every aspect of the game in this review, so I am going to concentrate on the most important things. These include the reimplementation of V.A.T.S., new items and monsters, the factions, the all new hardcore mode and of course, the glitches. 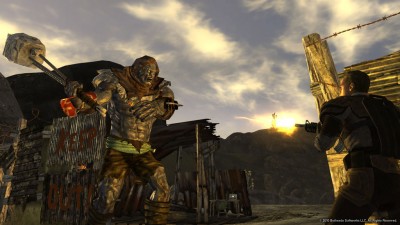 A nightkin with his learnin' stick

Even though you can run and gun in New Vegas, V.A.T.S. makes a return and it is a little different. There were two main reasons I used V.A.T.S. in Fallout 3: you were invincible for the duration of it, and there was no other alternative because the shooting outside of V.A.T.S. was not accurate at all. This time around V.A.T.S. is a little more realistic, but less useful. In New Vegas you are no longer invincible during V.A.T.S. so that means if you are in close quarters enemies can hit you effectively and you are stuck absorbing their blows instead of evading them. In addition to V.A.T.S. you can also aim down the iron sights in New Vegas, which is infinitely more useful. I still use V.A.T.S. every now and then, but overall the iron sights are more effective during my killing sprees.

A new location means new stuff. While some of your old foes like radscorpions and ghouls return in New Vegas, many new enemies appear as well. Among them are weird science experiments that have the body of a coyote and the head of a rattlesnake, as well as super mutants with the technology to turn invisible. Most of the time enemies travel in packs, and during your low levels it is very dangerous to travel off of the roads for long periods of time.

In addition to enemies, you will also meet new friends that travel with you. The companions you find in New Vegas are more helpful than most of the ones you find in Fallout 3, and you can control them to a certain point via the companion wheel. You can give them tactics like keeping their distance or being aggressive, or tell them to take a stimpak if they are low on health. While they cannot follow you over rough terrain very easily, I came to rely on my companions on more than one occasion throughout the game.

There are a few new weapons and items in New Vegas as well. Many of the guns from Fallout 3 appear in this game, but some new ones, like the grenade machine gun, give you some diversity when you are laying waste to your enemies. There are also a few new items to help you out along the way. While I stuck with my plasma and hunting rifles throughout most of the game, the ability to run around the wasteland dressed as a roman centurion wielding a gladius makes me a happy camper. 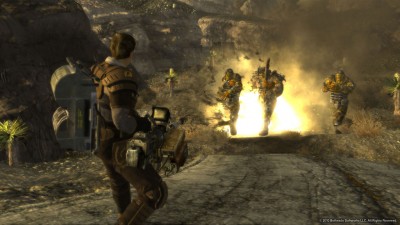 The karma system also makes a return in New Vegas, but this time it is a little different. You still have the overall good or bad karma level, but the way the different factions throughout the game look at you is way more important. If you help out a faction they will be friendlier toward you, but if you go against another one they will usually attack you on sight. At first I thought the factions were all going to have good and bad points about them, but as I played I noticed that the factions were either good or bad with no gray areas. Also, if you kill members of bad factions you get good karma, but if you steal from bad factions you get bad karma, which doesn’t make much sense to me. Overall the different factions are a good idea, but they could have been fleshed out better.

If you think New Vegas is too easy you have the option of turning on hardcore mode this time around. Hardcore mode turns the game into a simulation of sorts in that you have to keep your character fed, hydrated and well rested or you will die. Also, stimpaks and RadAway heal over time, ammunition has weight and only doctors and doctor’s bags can heal injured limbs. This makes New Vegas a completely different experience, but it makes the game hard to the point where the game itself recommends not turning it on.

Like Fallout 3, New Vegas was released with many bugs and glitches in the game. Most people have different experiences with it, and I have experienced a couple freezes, getting stuck in the environment, enemies getting stuck in the environment, the inability to finish a quest (pre-patch), and strangely enough, dynamite raining from the sky while I was in V.A.T.S. Some of the bugs made me laugh, and some made me pretty mad, but despite all of them, I still find myself really enjoying the game. It just makes me wonder how an engine that was used for the same type of game two years ago can still have this many bugs and glitches present.

Despite all of the bugs, New Vegas is still a great game you can sink many hours into. While it is very similar to Fallout 3, there is a whole new wasteland to explore, a main story that has multiple endings, and a ton of side quests. It will definitely take more than one play through if you want to see everything. If you were a fan of Fallout 3 you will definitely find yourself losing track of time while playing New Vegas.