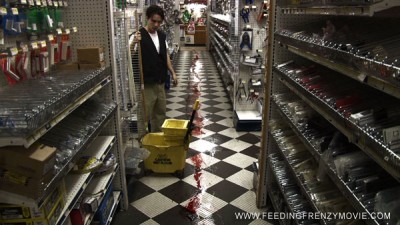 After gaining considerable internet fame making reviews of the Star Wars prequels, the folks at Red Letter Media have diverted their considerable independent talent to making a full feature. Stuffed to bursting with allusions to the gore of cinema’s past as well as plenty of its own red stuff, Feeding Frenzy is a short little grosser that plays to its strengths and thankfully avoids many of the pitfalls becoming of first-time major filmmakers.

Jesse is a clerk who just graduated from the same school of malaise and unpopularity as Dante from Clerks. The brunt of all social apathy in the area, his life suddenly takes a turn for the supernatural as he discovers the owner of the hardware outlet he works at has kept extremely dangerous hellspawned creatures below the storefront. As is the destiny of all demon creatures, the beasties escape and begin to terrorize all they come into contact with. As is also the destiny of all demon creatures, their biggest challenge comes from the rag-tag assortment of young adult archetypes that join up to defeat – or merely survive – the onslaught. 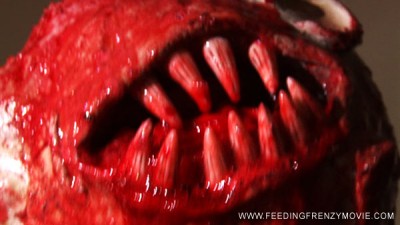 The rubber-monster sagas of the 1980s are the beloved and messy feathers in Feeding Frenzy‘s cap, and the same tropes are exploited here to glorious effect. A film tailor-made for fans of the disgusting and histrionic, everything from the effects to the acting caters to the immediate effect of tickling the reptilian part of the brain that likes to see hot girls chased down to death and protagonists attacked by the left-overs of a plastic surgeon’s office. To the film’s credit, though, were a vast majority of movies are content to simply revel in its camp, Feeding Frenzy goes the extra mile in its production to give the proceedings an added layer of impact.

For starters, the cinematography is wont to relish static scare shots or patrolling tracking shots for tensions (as is proper), but also take leaves from horror’s subtler side. Tilted angles and shifts in focus aren’t simply means to a jump scare, but contribute to a persistent unease when required, contrasting meaningfully from the plainly shot scenes of slapstick drama in between spooks. It feels much more Sam Raimi than John Carpenter, and its a step that many attempting the style miss. Lighting and set direction were obviously shot for convenience but fit their respective roles decently, with a few flourishes in the lighting department. Costume selection is only practical, a missed opportunity, save for Plinkett’s character-and prop-drive motif that functions well but often gets in the way of line delivery. 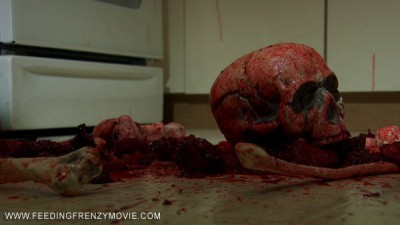 Effects, however, are the most practical of practical, sometimes consisting of a prop obviously thrown from off camera into the waiting arms of an actor. Far from a deterrent, more creativity and skill are shown in these moments of workshop effects than in most other films’ entire run-time. Its the kind of participatory thrills that come equally from the magic trick itself, and figuring out how it was done afterward. While the cheapness quickly ascends beyond all ridiculousness, there’s a sense of nostalgia present that popular horror has given up – quite stupidly – in favor of insidious jump cuts and remakes of Japanese movies. And yes, the blood is most assuredly the corn syrup and dye-kind delivered in troughs, and you’ll love it.

The one, and quite noticeable, detour away from genre standards is in the actor direction. Performances range from the terrible to surprisingly entertaining, but not for the expected reasons. The anticipations for such gross-out films is a collection of porn performances, so bad they gain a hilarious camp value. But when the acting’s bad in Feeding Frenzy, it’s so terrible it passes camp and circles back around to just being horrid again. Ron Lipski’s Jesse is a strong lead suffering from a prologue we’ve all grown tired of five years ago, but still manages an amiable turn-around by the time the beasts take their first few victims. The rest of his crew range from wafer-plain to glorious Shatner-tizing, all buffered by a strong script that maintains a consistent flow of jokes – both groaners and actual wit. 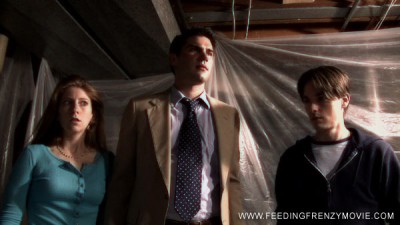 But what all familiar with Red Letter Media’s previous work are waiting for is Rich Evans’ Mr. Plinkett (also the co-director), the star of the aforementioned Star Wars reviews making his first appearance before the camera. Sadly, this full-body version of Plinkett suffers a sizable slash to the mystique gained through having all his grungy witticisms delivered through voice-over. The performance never recovers from a sense of uncomfortableness, although the script still saves the best for the sociopath. Despite the forced nature from a lot of the physical performance, it’s still an obvious step in a character evolution that could very well be the best thing the internet has produced since LAN lines.

Feeding Frenzy is an unapologetic homage to the things that go squish in the night, and it manages a surprising level of cinematic competence along the way that puts it a step above its higher budget contemporaries. Some of the acting is literally painful to watch, and the niche demographic on this one is one of the smallest in film, but it delivers on its promise of blood by the bucket-full and effects with a level of cheese that would make Tom Savini proud. This frenzy is a contagious one. 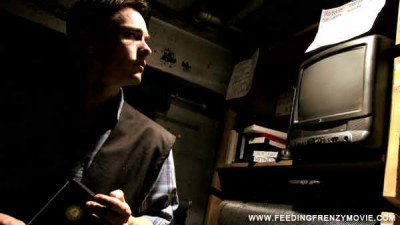