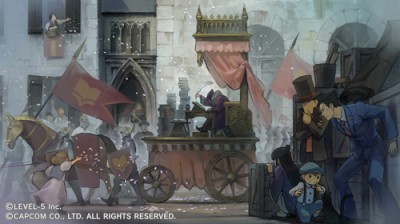 Puzzle solvers rejoice, as the two premiere portable problem-solvers are coming together onto on 3DS cartridge. Both titular characters (and their respective sidekicks) from the Professor Layton and Phoenix Wright: Ace Attorney will join forces on an upcoming crossover adventure on Nintendo’s handheld.

The title, currently dubbed “Professor Layton vs. Phoenix Wright”, takes place in Labyrinth City, a town full of puzzles with a theme of contradiction. The case that brings the two teams together focuses on the defendant being called a witch, and acts as only the inciting incident in a battle against “the Storyteller,” a man with a Death Note-like ability to make his written wills become physical reality. The production appears largely set in Level-5’s backyard, with Ace Attorney creator Takumi Shuu playing an yet to be determined major role.