Thrill seeking gamers often explore the survival horror genre to get their adrenaline flowing. Before Amnesia: The Dark Descent, developers Frictional Games were known for the Penumbra series and its ability to make gamers curl up into the fetal position in their computer chairs. The second installment in this series, Penumbra: Black Plague, is definitely one you want to play in the dark and with headphones on. 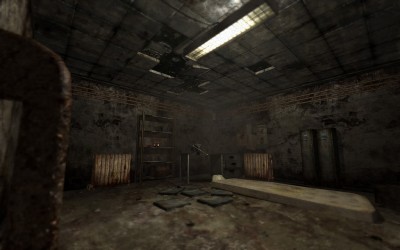 The room you wake up in

When I play survival horror games I think of games like Resident Evil or Dead Space where I get weapons to shoot my way through the game. This is not the case this time around. Black Plague is set up like a first person shooter, but there are no guns. If a monster sees you (and they probably will because they have flashlights), usually your only choice is to run, hide and hope you got away for the moment. Your only defenses are your stealth abilities and your quick thinking, which makes the game even more suspenseful.

In Black Plague you play as a man named Philip who wakes up in a locked room of a seemingly abandoned research center. Upon escaping the room he realizes that many of the people at the center are infected with a virus that turns them into zombie creatures. The ones that aren’t infected are either dead or fighting for their lives. The only information Philip has to go on is an email from a friend telling him to finish the work he started. Although the story is pretty cut and paste for the horror genre, it has some strange twists, and the sense of isolation really ramps up the scare factor. You only have interactions with a few other personalities throughout the game and they are either through a computer monitor, or they’re voices in your head… 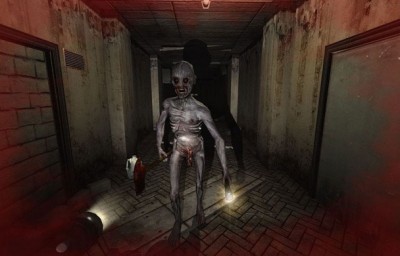 In his house it's no pants, no problem

While solely taking place in a research facility, Black Plague still does a good job in keeping the scenery fresh. You will travel through different parts of the facility, including the sewers, all of which have a very unique feel to them. There is even time to briefly brave the freezing cold outdoors.

While the graphics are not top notch, they still do a good job of maintaining a believable and truly frightening experience. This is true for both the environments and the monsters. While most of the monsters look similar, they are so grotesque looking that even Philip starts to freak out if he stares at them for too long.

Black Plague sounds just like a horror game should sound. While you are wandering the halls of the research center you will hear eerie ambient music, but it never distracts you from the game. Accompanying the subtle background music are the eerie sound effects. Every time you hear an unexplained noise you will probably retreat to a dark corner, only to realize you knocked some boxes over. Since there are not many other characters, the voice acting is minimal, but very well done. Overall the sound reemphasizes that you are (almost) completely alone. 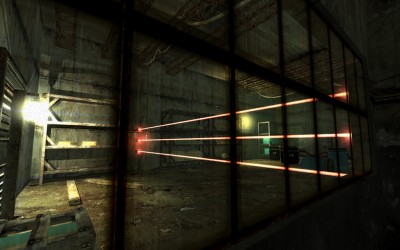 This is one of the few first person games where you will not use a single weapon throughout the experience. The two main aspects of Black Plague are puzzle solving and running for your dear life. You are only armed with a flashlight and some flares you pick up along the way, so if you are in the mood for some zombie shooting, this is not your game.

The puzzle solving can go from simple, to very in-depth. Some of the puzzles are as easy as stacking boxes on top of each other to get to a higher area. Others require you to do some actual research and read files on various computers you come across and look over notes Philip jots down in his notebook. Some of these, especially near the end, can get pretty tough, but it is very rewarding when you eventually solve them.

When you are not solving puzzles, odds are you will be avoiding and running from the “infected.” Most of the time they are pretty easy to fool because all you really have to do is turn a corner and hide in a dark spot, but it still gets your heart pumping when they see you. It can also get a little tricky to hide in the darkness from the ones with flashlights. There are a few opportunities where you can trap some of the monsters, but for the majority of your playtime, you’ll still will want to be as stealthy as possible. 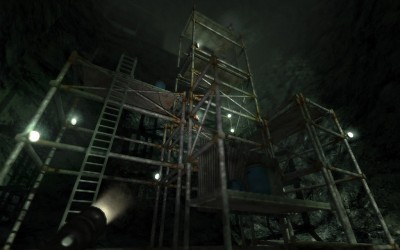 You will explore other places besides hallways

While the controls in Black Plague are very similar to most other first person games, there is a unique tweak. Instead of just clicking on something to interact with it you hold down the button to grab it. This means when you click and hold down on a door you move the mouse to push and pull it. In addition to that, you can also throw items in this same fashion to distract monsters and you can break parts of the environment, like glass, by hitting it with a piece of concrete that fell off the wall.

Penumbra: Black Plague is worthy of the survival horror genre. Those who have just discovered Frictional Games by playing Amnesia: The Dark Descent will definitely enjoy this entry into the Penumbra series.  The story is intriguing, the puzzles are challenging and intuitive and the graphics and sound really add to the creepiness of the game. The overall game might be a little short, but since you will probably spend a good amount of time puzzle solving it is still worth the purchase. Just be sure to play it in the dark with your headphones on for the optimal survival horror experience.