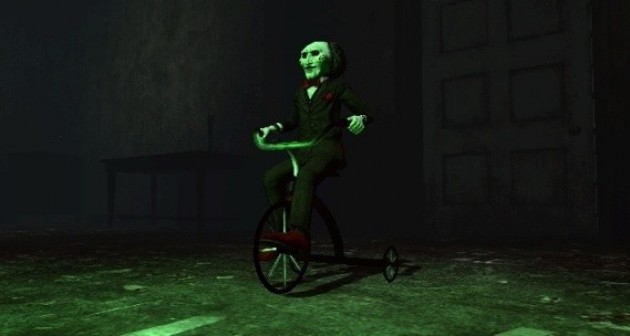 The game is set in an abandoned mental facility, in an unknown American city. It takes place directly after the events of the first Saw movie, and follows detective David Tapp. Fans of the films may remember Tapp being shot shortly before the end of the first movie. Well apparently Jigsaw wasn’t too happy with this outcome as he didn’t get to teach Tapp his lesson, so he kidnaps Tapp, heals him, and puts his head in the infamous reverse bear trap contraption. As Tapp, the player is tasked with escaping the hellish mental facility. You do this by solving puzzles, avoiding deadly traps and hazards, defeating enemies, and uncovering clues.

Jigsaw is trying to teach Tapp to value his life and see the error of his ways, as he does with all his victims. At the start of the game, however, this theme is virtually nonexistent, as the player is tasked with surviving, but counter to Jigsaws previous victims for no particular reason. As the game progresses,  you find clues and information that fill you in on the history of Jigsaw, his true identity and how to catch him, which carefully tie into the ending and the major choice you have to make in which Jigsaw reveals his lesson. In addition it becomes vital for you to save other victims of Jigsaw’s tests in order to earn your freedom. These victims include both new and returning characters, most notably Amanda Young who plays a major role in the first three movies. The story is mostly good and the multiple endings are interesting and unique even though they do feel a bit contrived. However, Jigsaw’s main ideology and motivation for doing what he does is poorly represented in the game. While Jigsaw will toss out moral and ethical dilemmas left and right, this isn’t always represented in the choices the characters in the game have to make or the symbolism of the traps. Another pet-peeve is how detective Tapp appears to have aged backwards dramatically in the short time between the movie and the game. In the movie Detective Tapp is played by the seasoned Danny Glover, yet in the game he looks young enough to be in college. It is in no way game breaking, but one has to wonder why they chose to go that route. 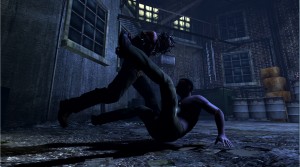 During the game you’ll often run into enemy characters who are in the process of completing their own test from Jigsaw. Their life depends on getting to the key you have implanted in your body, and so they’ll do whatever they can to hunt you down. This is where the combat comes in, but to be honest…I wish it wouldn’t. You’ll find several different weapons throughout the game, ranging from guns and explosives to bats and table lamps. The guns are few and far between and never provide you more than a clip full of ammo, so you’ll mostly end up using whatever blunt object you happened to be carrying before the encounter. The problem is that the fighting system is so poorly designed that even though you’re supposed to be able to block and counter you’ll never manage to time it correctly, and I mean never. The few times I did manage to do so was just out of pure luck, and I couldn’t tell you how it happened. Because of this, what you’ll end up doing is repeatedly hitting the opponent in between his attacks, hoping that you’ll be the one to outlast him, which in fairness you usually do without much stress.

Something you’ll also run into quick time events and minigames. Quick time events (QTE’s) mainly appear whenever one of Jigsaw’s traps are involved, which comes in two main flavors. Firstly, you’ve got the major story related traps. These happen a handful of times in the game and usually involve you freeing yourself or an ally from one of Jigsaw’s horrible contraptions. As far as QTE’s go these are pretty well designed, with button flashes appearing on relevant objects and parts themselves rather than just some arbitrary position on the screen.  Then you’ve got the environmental tarps ,most commonly in the form of a shotgun attached to a trip wire behind a door frame. With these you’ll have to pay attention and react quickly. Usually I would be tempted to say that this is bad design, but they happen often enough and keep you on the edge of your seat, which is kind of the point in a horror game. 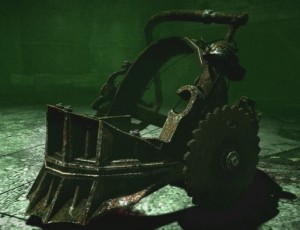 Then you’ve got the minigames, which are even more frequent than the quick time events. These range from picking the lock of a door, to sticking your hand inside a toilet-bowl filled with syringes. In the latter case you’ll be tasked with finding some small object hidden amidst the syringes, so naturally, rather then carefully emptying the bowl one syringe at a time you immediately jab your hand in and start digging, meaning you’ll have to collect the item before the pain becomes too great to handle. There is another variation of this minigame where you stick your hand into a dead body filled with razor wire. Then there are the more benign minigames like the lock picking which usually aren’t timed. These are mostly simple, many of which involve collecting parts found around the environment to complete a mechanism. Often these are optional, with the exception of the lock picking minigames that lead to the next area.

Lighting is a big part of the game. You start the game with a lighter that you can use a few seconds at a time to light your way through dark corridors, but as the game progresses you’ll find more portable light sources. This is important because sometimes you’ll run into puzzles that require you to examine the environment for the solution, or the light itself will be part of the puzzle. Unlike the minigames, the puzzles often require some thought and are generally well designed, even surprisingly innovative at times. 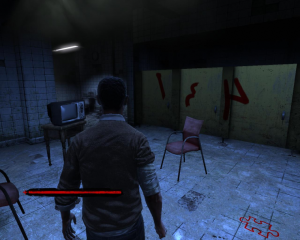 The game looks authentic enough and the graphics can hold their own. The textures may not be of the greatest quality and the models not of the highest detail, but the lighting makes all the difference, you won’t notice bad textures or shoddy models when the hallway is pitch black and the only light available is shining off the metal frame of a hospital bed in the distance. Unfortunately the blemish in this shine is definitely the animation, in particular during combat. The movements are best be described as jittery and slow, this can often result in a killing blow that looks more like a friendly jab, or an arm that comes to an unnatural stop in the middle of a swing. The sound design is pretty good. You’ll hear all the expected assortments of ambient noise, as well as a number of screams and clutter from the distance. The voice work, however, is pretty abysmal, the characters have little to no sense of urgency in their voice, even in the most dire of situations. And the script in general is just not as good as in the movies.

All in all, Saw is a decent enough horror game. The story, graphics, atmosphere and puzzles are all mostly good. But the horrendous combat system, the unconvincing voice acting and the occasional inconsistencies prevents it from being great. It’s also important to note that if you didn’t like the Saw movies you’re not going to like this game. It’s definitely a game for fans, as evident by the constant references to the movies. You’ll still understand the main plot without having seen the movies, but a lot of what makes it interesting will be lost on you. I can, however, recommend this to any big Saw fans, the game will provide some interesting back stories and shine some light on some of the more convoluted twists. Try before you buy.