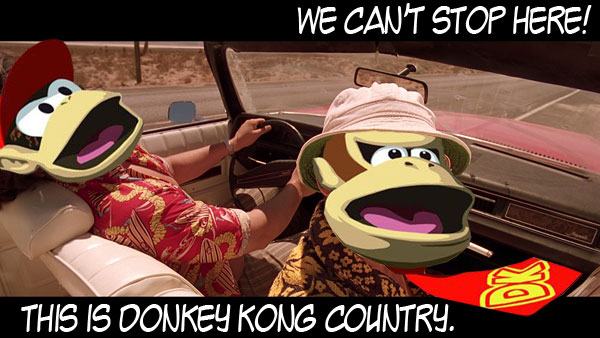 It’s been 15 years since Adam Sandler proclaimed that Donkey Kong Country was not only the best game ever, but also way better than Mortal Kombat. Ever since then we have been graced with two traditional side scrolling sequels, one 3D platforming adventure and a slew of much less impressive spin-offs. Now, after a nine year hiatus, Nintendo is finally giving us a true classic Donkey Kong sequel. However, several outstanding questions remain. What was it that made the originals so memorable and is there really any chance that this new iteration into the series will be able to stand on it’s feet among a slew of Wii banana peels? 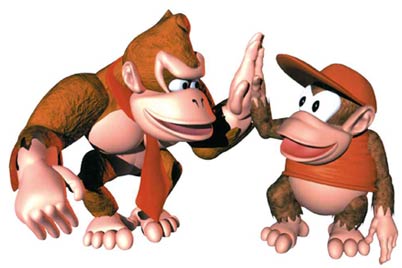 Donkey Kong Country
We were given our first true Donkey Kong Country adventure on November 21, 1994. What we got was a visually brilliant platformed that pioneered a variety side-scrolling canon. The game itself is rather short but the sheer personality of characters made Donkey Kong Country’s three hour campaign something to truly be remembered. The game features one of the best soundtracks in gaming history by David Wies. If you don’t have DKC‘s Aquatic Ambiance on your iPod, you don’t know shit about video game music. This along with the engenious Advanced Computer Modeling sprites makes the game stand out even by todays standards.  However, once we knocked out the criminal King K. Rool and reclaimed our horde of bananas we happily marched back to our hut and high-fived Cranky Kong… that is when the great kidnapping happen.

Okay, Diddy's still here. I can still dig it.

Donkey Kong Country 2
At some point RARE, DKC’s original developer, decided the best thing for the series would be to remove the Donkey Kong from Donkey Kong Country and gave us Donkey Kong Country 2: Diddy’s Kong Quest. We were thrown into a world where the rally cap wearing Diddy and his totally platonic girlfriend Dixy. The only real constant was K. Rool and his Kremlings. Although fun, DKC2 was nowhere near as good as it’s predecessor. Diddy and Dixy couldn’t fill DK’s tie knot and the once refreshing game play just wasn’t as fresh as our first adventure. RARE knew there was only one way to fix this.

Donkey Kong Country 3
Get rid of all the characters the fan’s grew to love and replace them with bland copies with  identical move sets. That’s what RARE decided would revive the series in 1996 with Donkey Kong Country 3: Dixie Kong’s Double Trouble. Dixie and her cousin Kiddy set out on a journey to find the missing DK and Diddy whom have disappeared during a routine fishing trip. A kidnapping! How original! The game play follows suit with particularly bland, short adventure to defeat the still clever K Rool. 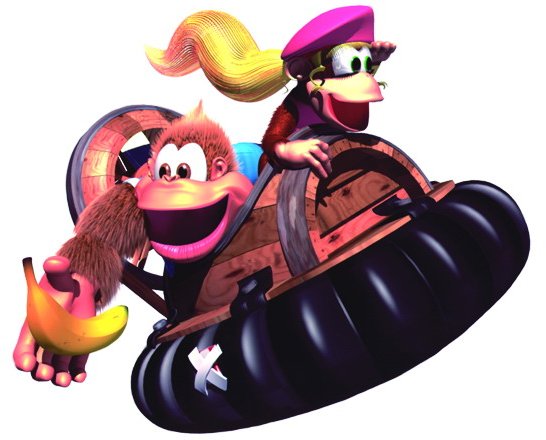 WHY! Why would you do this to me!?

After DKC3, we the Kong Crew took a passable 3D adventure and the good ole’ Donkey Kong ventured out to play music, swing (not that kind, sicko) party, play tennis, play golf and overall do nothing of any notable value. It seemed that our favorite Ape got an apartment with Fox McCloud so that they could do nothing for fans for the rest of their lives. That is, until Retro announced a reappraisal of the long time series with an all new Donkey Kong adventure on the Wii.

Donkey Kong Country Returns
So here we are again. Retro Studios, who revitalized the Metroid series with Prime, is at the helm and willing to revive DKC sans all the useless characters and give us control of the original Kong Duo once more.  The game is Donkey Kong Country Returns, a hopelessly stupid title in-line with NEW Super Mario Brothers. Apparently, Nintendo thinks its fans are too stupid to delineate between a brand new game and a game that came out fifteen years ago. Thankfully, DK and Diddy are controllable once more in a beautiful looking 2D sequel to the Donkey Kong series. But what has to be done to keep the series relevant and avoid making the same mistakes that the previous sequels failed to realize.

Donkey Kong Country has an easy formula to replicate. Simple platforming with fast twitch mechanics in the form of barrels, mine carts and animal friends. So far we’ve seen the animal friends and game play that shows off barrels and mine carts. Admittedly, this had gotten a little trite in the past, but fourteen years is a long time for something to get fresh again. In fact, from what has been seen these old situations have been freshened up with interactive environments and theatrical scenarios. Even the typical boss battles have been given some fresh air by adding some 3d flare to the old-fashioned 2d fare.

Where many think the lynch-pin of the classic Donkey Kong series was DK himself. I believe that isn’t true. The only constant in the DKC series is actually King K. Rool. But what’s this? It seems K. Rool wont be showing his face in DKCR. Instead, Retro seems to be borrowing Aku Aku from the Crash games. Also missing are the myriad of Kremlings that populated the Donkey Kong world. Without DKC’s Bowser will the motivation to win be the same? From the looks of the game, odds are good. The stunning visuals and artistic reverence seem to overpower the loss of our once great foe. In fact, our new enemies seem just as lively as our old ones. I doubt the croc with the gold belly can be replaced, but at least it’s not Kiddy Kong working behind the scenes. 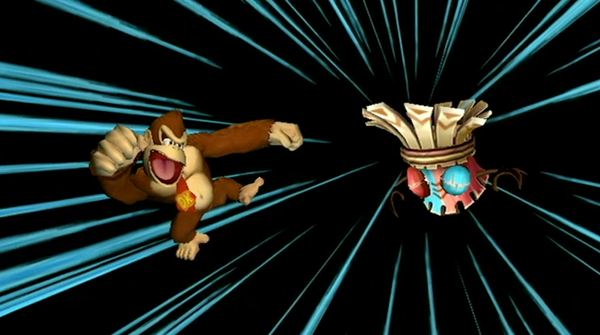 This is our new villian, the evil Tiki's

Here’s the main problem: it’s on the Wii. If there’s one thing we have learned it’s that the Wii can ruin most of the things we love with waggle. Remember our two modes of attacking in the DKC games? Jumping and rolling. Well, now in order to do one of those you have to flail your Wiimote like an idiot. Along with the ground pound and a few other moves it looks like you’ll be interrupting play time to shimmy about.

All in all, Donkey Kong Country Returns looks like it could be a hit. In Nintendo’s new plan to feed off our nostalgia like sparkly vampires, this title seems to be what we all want. It’s a great 2D platforming fest that celebrates the classic fare with memorable characters and involving game play. We’ll truly find out if it’s worth revisiting the classic series on November 21 (date sound familiar?),  when it’s released in the US for all of us to enjoy.

4 thoughts on “We can’t stop here! This is Donkey Kong Country.”