This reimagining of the classic gore fest trilogy of video games had a troubled production history with the original developer Bottlerocket being removed from the project for unknown reasons. Without a developer, the remake’s future was left up in the air. That is until a new developer was hired by Namco Bandai, finishing up the game. Long time fans of one of the first violent video games were thrilled that this game would end up being released. But would it be faithful to the originals?

In this game, you once again control Rick Taylor, who is murdered during the opening of the game. He once again visits West Mansion at the behest of Dr. West, him having Jennifer for personal reasons. Shortly after they enter, Jen is kidnapped by the demented doctor and Rick is attacked by West’s demonic minions.

Moments from death, Rick notices the ancient Terror Mask on the floor near his pool of blood. Looking for a host for its powers, the mask begins to talk to Rick, promising to help him rescue Jennifer if Rick agrees to help the mask. Putting the object on, the Mask possesses Rick, turning him into a hulk of a man complete with many new killing moves and combat powers. Setting off in pursuit of Jennifer, the game begins.

While Splatterhouse may appear to be like pretty much every other 3rd person action game on the market today, it is the little details that make the graphics stand out. It is a nice effect to see Rick’s combat damage heal in real time. Seeing a severed arm stump grow back and missing chunks of rib flesh regenerate is very cool indeed. The backgrounds are also very imaginative; full of demonic scenery and landscapes full of viscera. There’s a reason this game was mentioned in Fangoria’s June 2010 issue, and it isn’t the theme alone.

This is a good thing, as the enemies aren’t very creatively designed or memorable. They exist mostly as obstacles in Rick’s way for the player to kill. The bosses don’t fare any better, and are just larger with cheaper attacks. Some of them have imaginative designs, but their monotonous visuals in combat make them pretty stock. They might be boring to watch, but at least they are fun to kill.

What the game does do right visually is its depiction of violence and the brutality of enemy kills. Rick has a plethora of attacks with everything from clubbing blows to ramming attacks to several types of grab moves, all with bloody goodness to go along. The Splatterkills, special attacks that can finish off weakened enemies, are great to watch, but you may find yourself tiring of the same animation every time you execute it.

Music is a mix of macabre melodies and hard rock/heavy metal tracks by bands such as Mastadon. While the instrumentals are reminiscent of the Genesis games, the band tracks sound generic to me, adding little to the game’s heavy nature. They seem to be included only to promote the bands rather than set a mood.

The voice acting is very good all round, with particular excellence from the voice of the Terror Mask, the man known as Jim Cummings. He delivers the mask’s many quips with relish, making for some of the best voice work I’ve ever seen in a game. While some may believe that this takes away from the mystery of this once Mayan mask, it is still great fun to hear the voice of Tigger deliver such hilarious lines. He also has quite the potty mouth, but I wouldn’t have it any other way.

Shanelle Gray does a good job with Jennifer’s dialogue, despite the script occasionally degenerating into the standard damsel in distress dialogue that even the best VA’s can’t do much with. You can only hear so many varieties of screams before you get tired of it. At least the flashbacks give her some good lines. Lastly, Fred Tatasciore gives some great vocal effects for several of the monsters in the game. After his similar work in Left 4 Dead, he seems like a natural at this stuff, probably the best since Frank Welker. 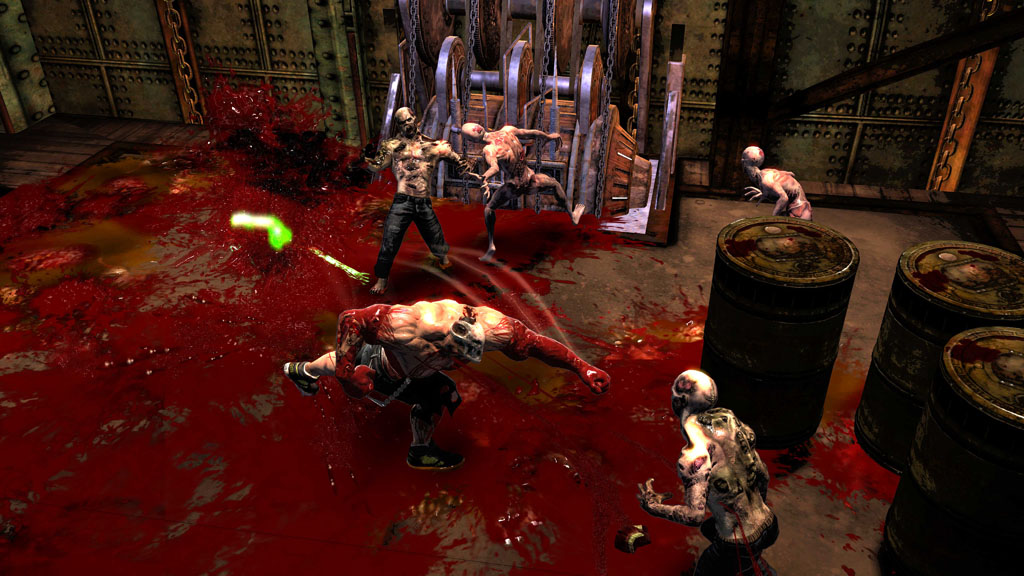 Splatterhouse plays much like God of War or Devil May Cry, with a singular character who collects powerups by defeating enemies, gaining new abilities, and killing more enemies. It’s an established genre, but I’m not tired of it yet. The series has always been well known for its gruesome weapon kills and those return in force, with the highlight being a chainsaw battle against Biggyman in one of the middle chapters.

An interesting element to this game is the lack of health pickups. Health can only be restored by making use of the Splatter Siphon ability. As long as you have some of the necro (magic meter essentially) you can drain blood from the enemies and surroundings for some quick life restoration. Much like Ninja Gaiden Black, this can lead to some tense moments when you have to balance defense with enough offense to stay alive.

While the enemies aren’t as aggressive as in Gaiden, this system still serves to make the game feel different. It’s enjoyable to see a game when you can’t just always sit back and wait for the enemies to telegraph their attacks. There is also an emphasis on mixing up the attacks Rick uses, as some enemies will outright counter a move that normally works great against other foes.

The controls are responsive overall with an easy interface based on mixing light and heavy attacks. Several attacks can be charged as well for additional damage and variety. The Splatterkills are similar to QTE’s in other games, but can be frustrating to complete. This is because the button prompts aren’t very clear at first, they aren’t on screen very long, and there is no way to pause during them to get a better look. Patient players will be able to figure them out eventually, but this is one area of the controls that I hope is ironed out for sequels. 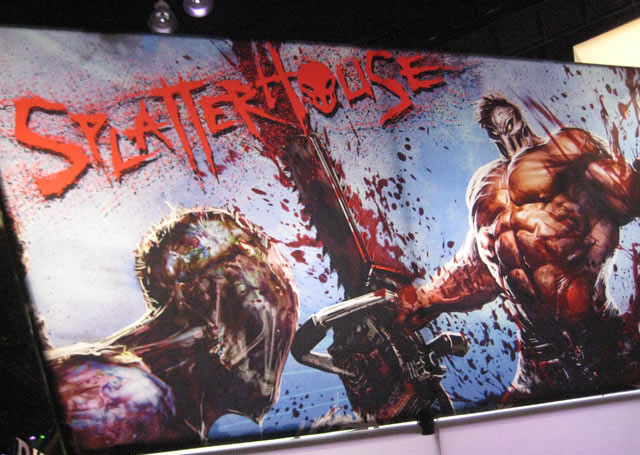 There is also a neat throwback to the original Splatterhouse games. There are times throughout the game that the action goes to a 2D side-scrolling camera with death traps to avoid. This is a fun homage to the first 2 games in the series, in which the game was really easy if you knew how the enemies attacked and when to counter. It’s a nice touch that old-school fans will appreciate, especially with the ability to smack the enemies into the foreground with a 2 x 4. Add in the fact that the original trilogy is unlockable complete with the uncensored arcade original, and you have a lot for old-school gamers to like.

Even though Splatterhouse is a very good 3D action adventure game, it is fans of the series that will get the most mileage out of it. Non-fans might be scratching their heads, wondering what the big deal is if they haven’t played the original series, given how many references the game has to the originals. Overall, this game is a must purchase for Splatterhouse fans and a rent for everyone else. If you do rent it, be sure to take a long look at its unique elements rather than just dismiss as a God of War clone, an unfair comparison that does video game history no favors. So grab that lead pipe and make this house live up to its name!

One thought on “Splatterhouse Review”