As the title explicitly states, Cladun is an RPG.  However, it’s not a typical RPG.  It’s a Nippon Ichi Software RPG, which is in a class of its own.  Not necessarily because of the quality, but because of the incomparable essence that is found in all NIS titles.  Like others in its stable, NIS’ Cladun: This is an RPG plays host to a cast of quirky characters, is set in a strange universe, and is replete with inside jokes, game references, sexual innuendo, and general irreverence for the genre and medium of which it is part.  But that’s the reason it works.  Cladun avoids the label of a generic dungeon crawler because it’s so unique when compared to “standard” RPG’s. 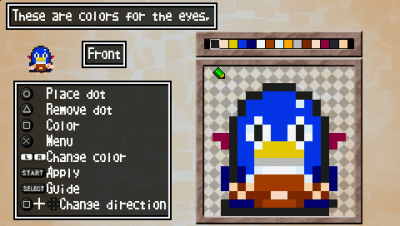 The character creator being used to make an 8-bit Prinny, the de facto mascot of NIS.

The first thing players will notice are the 8-bit inspired visuals.  Next, the equally retro soundtrack, which can be switched between “Modern mode” and “8-bit mode” depending on player preference.  Characters are tweaked versions of archetypes with the typical NIS twist, but the more appealing mechanic is the character creation.  Using a surprisingly robust editor, players can build their party from the ground up, pixel by pixel, or use one of the many pre-existing characters.  And while your party can have numerous members, you can only control one at a time due to the battle system.

Best described as a more fluid and dynamic version of the battle system found in the Mana series, Cladun allows you to control a single character as you traverse an essentially infinite number of randomly generated dungeons.  Players can sprint, block, attack, jump, and use items and magic depending on what class they have chosen.  Should you grow tired of a fighter class, you can switch at any time, an option that allows you to change up the game dramatically without having to start a new save file.

The hook behind Cladun is that it’s designed to be a portable RPG, making the PSP the perfect platform.  Some dungeons can be rushed through in less than a minute, and each dungeon has a par time which, if met, yields tangible results.  Naturally, dungeon crawling is accompanied by frequent encounters with enemies, loot gathering, and occasional puzzles.  Players can either take their time to defeat every enemy and loot every treasure chest, or they can speedrun, which yields its own rewards. 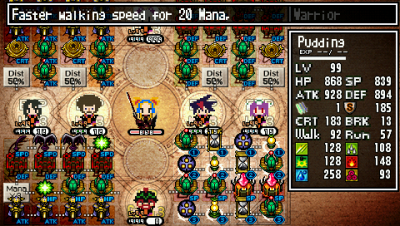 A powerful party, complete with support characters and items.

The element of Cladun that is the most unique is the party support system.  While it initially seems daunting and overly complicated, tutorial videos and a bit of time will help players learn the ins and outs of the surprisingly deep mechanic.  At the center of your party is your main character; the one you control on the battlefield.  Other party members can be assigned to different support nodes that result in stat bonuses or detriments depending on numerous factors.

Cladun essentially gives you all of the tools required to craft your own dungeon crawler experience, but this freedom comes at the cost of accessibility.  Those who have played similar games like Half-Minute Hero or 3D Dot Game Heroes or any number of NIS titles will be better prepared for Cladun’s unique offerings.  The game does what it can to guide newbies through the process, but the learning curve might prove insurmountable for the uninitiated.  The game was designed for weathered RPG veterans who can not only learn the complex mechanics but thrive on them, and those who have played enough to appreciate all of the humor in the script.

One thought on “Cladun: This is an RPG Review”