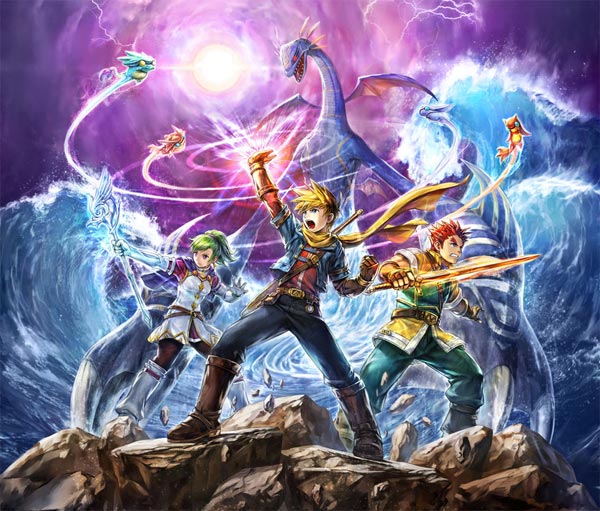 Laying dormant for a little over seven years, the Golden Sun series re-emerges on the DS with Dark Dawn. Taking place 30 years after the events of the Game Boy Advance titles, Dark Dawn puts you in the shoes of the children of Isaac, Garet, Ivan and Mia, the heroes from the first two games, and sets you off on their quest to do what every RPG hero has to do at some point, save the world. Other than that, nothing has really changed with the series. If you have played the Game Boy Advance titles, then you should feel right at home.

You will come across a lot of these guys

Dark Dawn is a turn-based RPG with a bit of a twist. While you have the staples like regular attacks, magic and items, you can also call on small creatures called Djinn, which can aid you in battle and when combined can summon powerful monsters and gods. In addition to combat, there are also some puzzles where you have to use your magic, or psynergy, to manipulate the environment so you can continue your journey.

Dark Dawn follows the story of the children of the heroes from the original Golden Sun for the Game Boy Advance. The kids get thrown headfirst into an adventure when they discover a “psynergy vortex” in their local forest. These vortexes suck the energy from psynergy wielding people (called adepts) and the world itself. Naturally, it is up to these young adepts, with help from some friends they meet along the way, to overcome many dangers and solve the vortex mystery and stop them before the world falls apart. 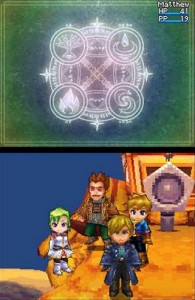 The only way I can tell Isaac and Garet are adults is by looking at their manly facial hair.

While the story is pretty standard for an RPG, the characters just won’t shut up about it. Much of the time playing Dark Dawn will be in word bubble filled cut scenes that you will have to read if you want to have any idea of what is going on. Most of these scenes drag on while the characters argue back and forth and go through more emotional phases in ten seconds than I do in a week. At times you are prompted to give your input by either selecting either a yes or no answer, or by picking a happy face, a very happy face, a sad face or an angry face. Most of the time this ends with everyone agreeing with your choice, or yelling at you because you were extremely happy at the thought of just sitting back while the entire world goes to hell. The only redeeming factor to the word bubble cut scenes are the fact that when you touch the name of a specific person or place in the bubble, you can view more detailed information about them on the top screen.

When I started Dark Dawn I was immediately confused about the age of the main characters. Outside of battle they are represented by small “chibi” versions of themselves, but when they go into battle they look like teenagers. Other than that, the game looks great overall. Most of the areas you visit are large, detailed and have a lot of nooks and crannies for you to find secrets in. Also, the battle animations are very entertaining. You are going to want to watch all of the summon animations more than once, and when you are tired of them, you can fast forward.

While the graphics really stand out, the audio, not so much. Both the soundtrack and the sound effects are pleasant enough to listen to, but after a while you will tune it out and let it fade into the background. The sound is not bad by any means, but it is nothing remarkable. 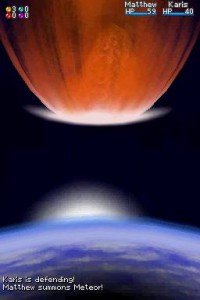 No, you don't play as Sephiroth.

If you have played the Golden Sun titles for the Gameboy Advance you will quickly find out that Dark Dawn does not reinvent the wheel. Besides watching the lengthy cut scenes, you will spend most of your time fighting enemies, solving puzzles and exploring. Even though it doesn’t do anything new, it is still a lot of fun to play, and as the saying goes, “If it ain’t broke, don’t fix it.”

The main part of most RPGs is the combat, and this one is no different. While still keeping many of the conventional turn-based battle choices like attack and magic, you also have Djinn to help you out. After finding and equipping Djinn to your characters, you can select them in battle and they will aid you in ways such as doing extra damage to enemies, healing you and raising your stats. After you use a Djinn it goes into stand-by mode waiting to be used as a summon. The amount of Djinn in stand-by mode will determine what summons you can use, and naturally, more Djinn equals better creatures to call upon. After summoning a creature, the Djinn used for it will go into recovery mode whereupon it will return to the character that has it equipped a couple turns later. 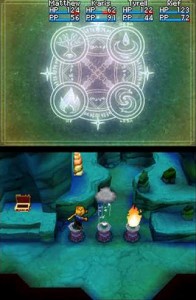 Sometimes putting fires out work too. It's just not as fun.

While this interesting twist makes battles very entertaining, it seems like you are constantly overpowered. It makes sense since the main characters are powerful magic users that can stomp most lowly animals that are foolish enough to stand against them with little effort, but you will definitely notice that the game is a bit on the easy side. There are a few bosses that can cause you some trouble if you are not paying attention to your characters’ health, but overall it is a smooth ride to the final boss with no level grinding required.

In Dark Dawn your characters are often lauded as being geniuses and generally super awesome for being able to solve the world’s puzzles and complete tasks nobody else has been able to do. Normally this would be a big deal, but most of the puzzles you face in the dungeons are easy to figure out. Most of the puzzles involve you using magic to push something, make something float, and when all else fails light it on fire. I went from thinking that these kids are super intelligent to thinking that everyone else is dumber than a sack of hammers while some punks with average intelligence solve all of their problems. In fact, the trickiest puzzles usually stand in the way of collecting a Djinn or a treasure you can’t quite reach, and nobody ever mentions those!

If you are a perfectionist you will be spending a lot of time exploring and managing your Djinn. There are a total of 72 Djinn, and many more treasure chests to collect, and you will probably miss some of them on your first play through. In addition to using Djinn in battle, they also alter your stats and give you extra spells to use, so you can switch Djinn between characters until you find a setup that works for you. If you want to find everything it will definitely add a few more hours onto what is already around a 20 hour experience.

While it is not without its faults, Golden Sun: Dark Dawn is a quality RPG for the Nintendo DS. The story is decent, although little long winded, and you will spend a lot of time exploring every inch of every new location you visit. While the cut scenes are rather lengthy and drawn out, the fun and engaging battle system more than makes up for them. Dark Dawn is great RPG for newcomers to the series and a must buy for fans who have waited so long for it.