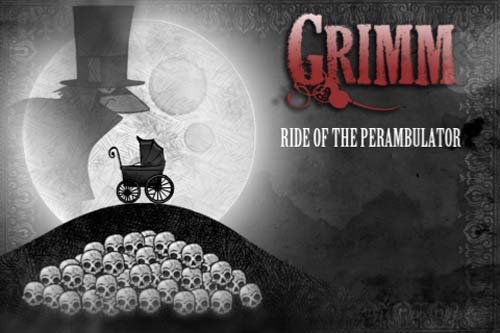 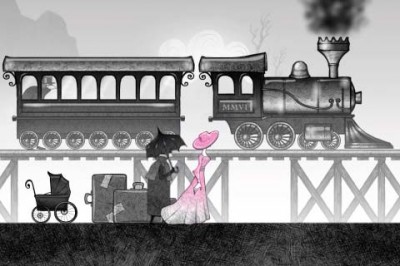 Grimm begins with a neglectful mother

A mother boards a train destined for shores less grey and a baby is left behind with a stroller and a nemesis. This is how Grimm: Ride of the Perambulator begins. This game from Robox Studios once again shows us why the mobile market is breaking through into the realm of legitimate game production. The dark tale that unfurrels it’s security blanket onto the iPod touch, iPhone and iPad follows the voyage of a lone baby left on a train platform. It’s your job as this infant’s stalwart stroller to deliver him from evil and hopefully to a reunion with his mother.

The game utilizes the ipod’s gyroscopic technology (tilting left and right) as a control scheme and you will find yourself tilting the world to navigate the carriage through 10 levels and 8 mini “boss” levels of gothic beauty. During your haunting adventure you will be assigned only two buttons. One is used to make your peram jump over enemies and obstacles and the other is your emergency brake. In addition to these two tactics you can shoot your baby from the carriage to attack enemies and solve puzzles, shake the iPod to escape skeletal clutches and tap hordes of crows away. You will use all these mechanics in several intriguing ways as you navigate carnivals, alleyways and construction sites and avoid drunks, demonic balloons and Grimm himself. Don’t worry though, the game comes complete with a three heart life bar, extra lives and check points to curve some of the more difficult areas. 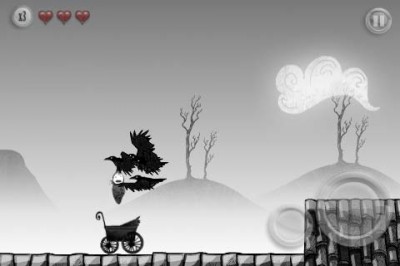 Even birds pose a threat to your rider.

Despite the games miniature size, it manages to cram an excellent amount of charm and variety into the morbid 4-6 hour journey. The entirety of the game is full of beautiful, foreboding gothic landscapes vaguely reminiscent of Edward Gorey’s artwork and, overall, carries the similar sense of dreary darkness exemplified in the recent XBOX indie hit Limbo. The unique story flows magnificently through a variety of interesting settings which all offer a new sense of isolation and wonderment as well as new puzzles and enemies. However, the gameplay still manages to sink into repetition at times and the slow pace of your carriage and  enemies drags the experience down just a tad. I can’t help but wish that, while my baby and his vehicle are being pushed along by a speeding train, I might actually feel a sense of speed instead of the sluggish roll that permeates the title.

After every few levels you will find yourself in the midst of a mini challenge level. These are most often centered on the game’s main antagonist, Grimm. The cloaked menace will venture out to kill your baby and you’ll have to take your empty carriage on a speedy chase to recover the toddler before time runs out. I haven’t felt this kind of connection with an annoying child since Yoshi’s Island, and the bonus, Grimm’s toddler doesn’t cry out in a way that makes you want to murder him. 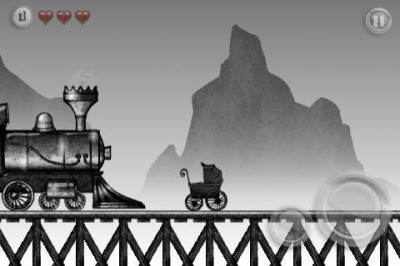 Sadly, the game tends to remain on the sluggish side even in dire situation.

Grimm: Ride of the Perambulator oozes charm and dishes out a dastardly amount of atmosphere and style. If I had to complain about something, it would be the lack of any score system or collectibles that might have inspired me into a second play through. Besides the obvious left to right progression, the game feels like it lacks the player incentive. That being said, this issue in no way trivializes the amount of dark fun I had with my adventure in Grimm and at $0.99 there is no reason you shouldn’t give this black gem a try.

One thought on “Grimm: Ride of the Perambulator Review”