Since gaming began, there’s been a constant pursuit of realism across all genres, but none more so than the racing genre.  Graphics and improved hardware are responsible for the major strides towards true simulation, but just as important are the host of driving related game peripherals.  Inspired by the arcade machines of olde, gamers have always tried to bring that experience home, with varying degrees of success.

While racing game aficionados will undoubtedly stand by the top-of-the-line racing wheels as the best controller for modern racers, to many, it’s too great an expense for the increased enjoyment of only one type of video game.  By and large, the only alternatives have been the standard gamepads, though unique controllers like the UltraRacer and the NeGcon are worth mentioning.

This brings me to the HKS Racing Controller, designed for the PlayStation 3 by Interworks Unlimited/Eagl3 Accessories in conjunction with the Japanese automotive accessory manufacturer, HKS.  Like most driving peripherals that aren’t steering wheels, the product looks a bit strange.  However, once you get your hands on it, you’ll wonder why something similar hadn’t been made before.

Retaining the form of a standard Dualshock 3, the HKS Racing Controller shakes things up a bit, replacing one analog stick with a lateral disc and moving the D-Pad to a less prominent position.  The X and Square buttons have been respectively replaced with gas and brake pedals, and it’s all complemented by a tiny display that serves as a pressure gauge for the pedals. 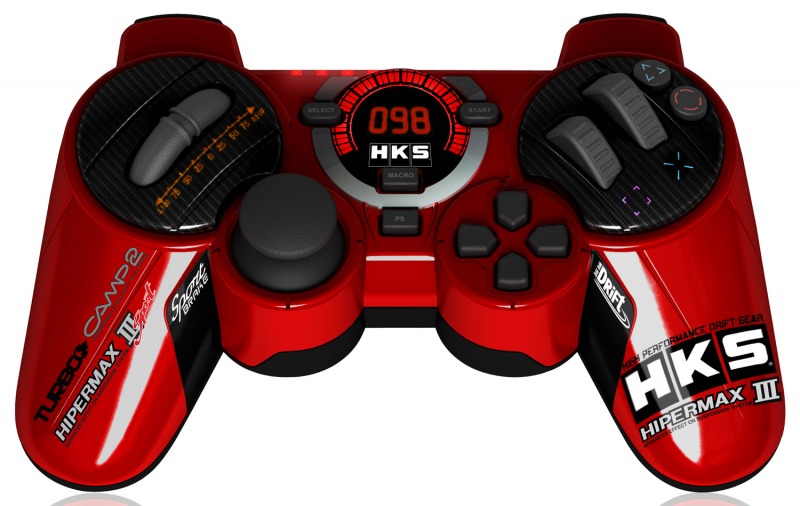 The paint job is gorgeous.

When you turn the controller over, you’ll find two toggle switches.  The first changes the function of the “disc,” which is, by default, set to replace the left analog stick input.  The second allows you to quickly remap the entire controller to fit the current control schemes of both Gran Turismo and Need for Speed.  As some of you may know, racing games typically opt for one of two methods for gas & brake; either the shoulder buttons or the face buttons.  The toggle switch goes a long way in improving compatibility with all racing titles and minimizes, (and in some cases eliminates) the need to change control settings within the game itself.

The “disc” is auto-centering, the pedals have a fair amount of spring in them, and the controller also supports rumble.  The L2 and R2 buttons “click” more than those on a standard Dualshock 3 because most configurations will have them replacing face buttons.  There’s also a macro button for those who want to make specific changes or map certain functions.  Some might be turned off by the lack of wireless or Bluetooth capabilities, but the cord is over eight feet long so chances are it won’t be a problem.

Priced at only $44.99 (a full $10 cheaper than a Sony brand Dualshock 3), the HKS Racing Controller is a must have for anyone who plays racing games.  The precision and utility far outweigh those of a standard controller, and while they fall short of the $300 racing wheels currently on the market, it’s a perfect product for those who crave a bit more realism but aren’t willing to shell out hundreds for the privilege.  The convenience of the GT/NFS toggle switch on the back cannot be overstated, and while the pressurized pedals will put a damper on extended sessions due to sore thumbs, overall, it’s nearly flawless in its design.