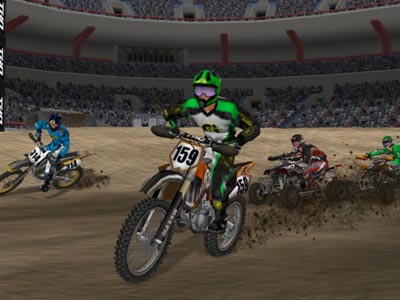 We’ve all heard of sleeper hits, but its rare indeed to come across a sleeper franchise. THQ’s MX vs. ATV series has sold over 10 million units since its first installment in 2004, across just four major releases. THQ has revealed that it will mark this occasion by announcing the next game in the franchise later today at the season opener of AMA Supercross in Anaheim, California.

“This record-setting milestone for the MX vs. ATV franchise is the culmination of consistently delivering genre-defining innovations and the most authentic motocross racing experience for fans worldwide,” said Michael Lustenberger, THQ vice president, global brand management. “The next iteration of MX vs. ATV will take the series to an exhilarating new level, and we are absolutely thrilled to unveil the first trailer during the 2011 Monster Energy AMA Supercross season opener.”