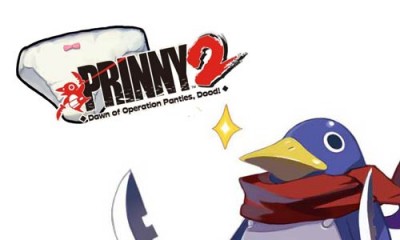 As a Disgaea fan I can say without a doubt that my absolute favorite characters are the lovable busty Succubi. Thankfully, a close second are the seldom-appreciated cat girls. Don’t worry, after most of the female leads comes the stars of Prinny 2, those down on their luck Prinnies—tarnished souls sent to repent for their sins with labor and low pay. Prinny 2: Dawn of Operation Panties (which wins my award for “title that will convince the most parents not to buy”) is the second game in the tough-as-nails side-scrolling Prinny series. Its predecessor still seems to be revered among fans of Disgaea and as a child who loved the classic Mega Man games I was pretty stoked when the review came my way. With that being said I was aghast when I found Prinny 2 to be a thankless trek through a valley of unkempt design and hacked difficulty. 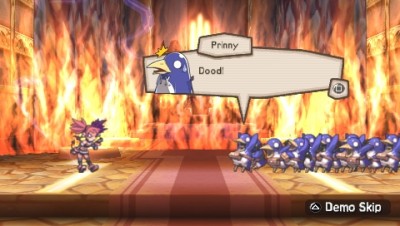 The visuals look great on the PSP screen.

Prinny 2 starts with the series staple, current Demon Lord Etna, having her panties pilfered by an unknown theif. Enraged to find her undergarments gone she sends 1000 Prinnies on a quest to retrieve them. Along the way you will run into tons of Disgaea characters in the form of enemies and NPCs. The story is the strongest pillar in this otherwise ramshackle shed. The voice work is well done, the dialogue is fun and funny and all the charm of the Disgaea series is more than present. Sure Nippon Ichi Software may be out of touch with what is actually funny nowadays, but if you don’t know what to expect from the kind of conversations that will go on during the game you literally have no business purchasing this title.

The gameplay is where Prinny 2 starts moving into strange territory.  Much like Mega Man the levels are set up with a right-to-left platforming portion that ends with a boss fight. There are 6 levels to choose from and you can tackle them in any order you desire before moving on to the “Wily’s Castle” of the game. You are given 1000 lives at the very start and it’s up to you to hold onto them. After every level you are sent back to the main hub to chat up the local residence and watch the story unfold. The whole thing is littlered with bright, colorful visuals and remains reminiscent of NIS’s titles isometric view.

The Prinnies suffer from two main flaws. Number one, they are abysmally slow and lack any kind of quick escape. This is damning since almost every enemy can overtake you after a daring escape and bosses will always move with much more agility than you will ever muster out of those tiny, wooden legs. Two, the Prinnies have the worst jump mechanics in any game I have ever played. It is based off of prior inertia and follows no natural course. During some of the more difficult platforming areas this will be more aggravating than any enemy. Still, I constantly looked forward to storming a level and even the boss fights posed a fun, technical read of trial and error gameplay which is something you will need to learn because the 1000 lives you get will go by fast if you continually try to blindly rush through a level. Where the game fails miserably is the level design and enemy placement. Enemies will fire at you from off-screen, instant kill spikes will rest just below your line of vision. Even the enemies resting positions seem to be chosen without any real regard for strategy. 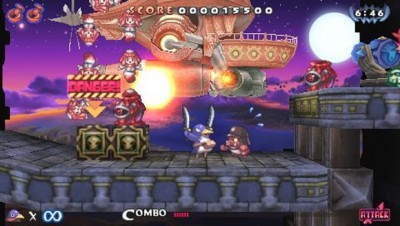 Prinny 2 uses both the foreground and background to kick you ass.

Now hear me out; a lot of you are probably at the point of assuming that I just sucked at the game and that’s my problem. I admit, I had to switch to the games more sensible “Baby” mode which offers you an extra heart but taunts you every second by having your three lives be floating diapers. But comparing Prinny 2 to similar trail-and-errors titles that have come out recently such as Donkey Kong Country Returns and Super Meat Boy shows it’s flaws. Prinny 2 is not a process of memorization and execution. The enemies act so randomly that what may work perfectly on one run will be reproduced entirely different on a second go. I died more often from some unseen force or by dropping off a ledge on top of some enemy or projectile that I would have never been able to see. Even Atlus’s Demon’s Souls had a much less frustrating level composition than most of what you’ll get in Prinny 2.

Even after saying all that I still don’t believe the games worst quality was its difficulty. What bothered me the most was the complete lack of incentive to continue. Other NIS titles usually offer some kind of niche situation that drives you onto completion like Disgaea’s item leveling system. Prinny 2 has no such drive. You will never gain any more abilities, which causes the standard air attacks, ground attacks and ground pounds to grow increasingly stale by the third level. In Prinny 2 you will always be a slow weakling against increasingly powerful forces and although this makes perfect sense in the context of the characters and world, it does not make for a good game.

I will digress though. The game did become more enjoyable in the easier difficulty setting and I did find myself continually saying, “just one more time.” Some levels still have a cornucopia of frustratingly cheap deaths but the bosses are very fun and offer a thinking mans challenge. The game has plenty of extras and replay modes like other NIS titles and those who have a deep rooted love for the Disgaea series will find themselves compelled to keep playing much like I did. There is some degree of satisfaction in defeating a particularly hard boss after losing 50 lives, but right after that joy you remember that you don’t actually get anything for your hard earned accomplishment. 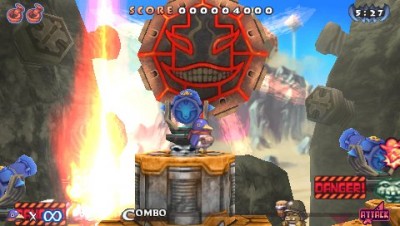 The game's difficulty only amps up as time goes on.

So here’s the breakdown. If you love NIS games and enjoy difficulty side-scrollers, Prinny 2 is worth a try. However, I can’t recommend the game to anyone else. I felt that everything was just so shoddily thrown together for the sake of artificial difficulty that they forgot to put in the enjoyment. If you are truly interested in the above, there is an overflow of great titles out that will wet your appetite than the meager 5 hour excursion that Prinny 2 offers.