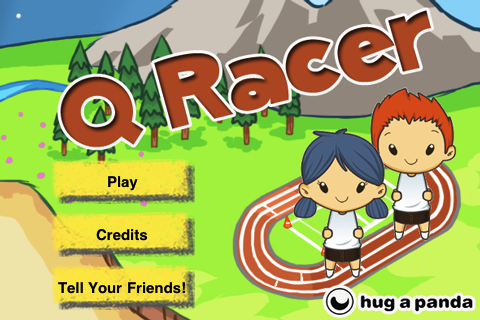 There’s two things I don’t do unless forced: run and learn. So there was some obvious confusion when Q Racer, the first educational title from Hug a Panda, hit my desk. The mere thought of playing a game that wanted me to virtually exert myself in the effort to expand my current knowledge base seemed outrageous. Still, although not my first choice, Q Racer tends to deliver on its promise of an enjoyable learning experience. 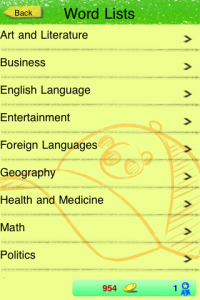 Q Racer has over 100 categories to choose from, at first this can seem incredibly daunting.

Q Racer pits the player against a group of seasoned AI runners in an attempt to spill some learning inside your iPod, iPhone or iPad. The game features three modes of play: showdown (a standard race), catch up (having to pass a set number of AI players on the track) and Escape the Mob (run away from the horde of angry learning enthusiasts). The gamplay is simple in that it has you answer a series of questions which speeds you up for every right answer and slows you down for every incorrect one. At first I was heavily unimpressed by the title, but as I investigated further the sheer volume of Q Racer‘s content opened up to me.

Q Racer contains over 100 categories to choose from. These range from “important” categories like world capitals to more trivial categories as awesome as famous villains in fictional history. As you race you earn coins and ribbons which allow you to purchase more categories and I dare anyone to complete them all. The amount of information packed into this small title is intimidating to say the least. The problem with this, however, is the difficulty the game sometimes presents. The game scales its information based on your performance. If you’re doing well, they reward you with more questions. But if you are having trouble, they continue to present you with the same four questions until you finally master them all. From a learning standpoint this is great but from a casual enjoyment perspective it is very disheartening. I quit a few subjects early on simply because I became bored with slogging through the same questions. I’m not sure if I can fault the game for my own attention span, but this shortcoming does need to be noted.

Q Racer supports a decidedly Flash game set of graphics even for an ipod title. They do try to make up for it with a small character customization system, but it doesn’t exactly make for a visually appealing experience. The racer’s animation is shoddy, beginner-level stuff and if your looking for vibrancy to spur your mental marathon forward, you might find yourself falling behind the pack. Sadly, the music doesn’t keep up either, but there is a huge asterisk by that statement. You can import your own itunes music and playlists into Q Racer. Did I mention this is the best thing ever! Nothing on this planet is as awkwardly intense as blasting through some trivia with Through the Fire and Flames by Dragonforce melting your eardrums. 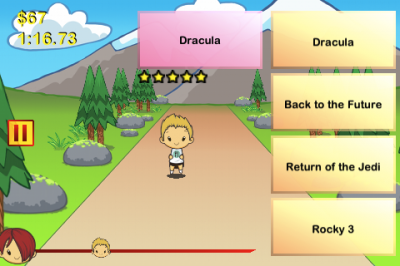 Sometimes you'll have to actively study the lists to perform well... other times not so much.

Q Racer is an interesting little gem. The gameplay is entertaining if not a little repetitive at times and you might have to actually study some of the lists – like the Japanese Katakana character matching – to make headway on some of the harder categories. As learning games go, it seems to hit on the best points. It will keep you entertained and you will walk away with something gained. Ask me any of the US state capitals, I dare you. Still, I can’t recommend everyone go out and pay the requisite $0.99 for the title because you need to want to learn in order to truly appreciate Q Racer‘s massiveness. As a learning tool it is exceptional, but as a game it falls short of the finish line.