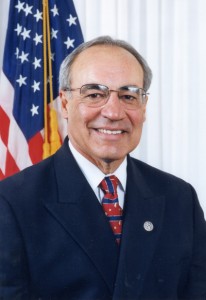 This past Monday, the bill H.R. 400 was introduced to the House of Representatives by Joe Baca of California (pictured above). If passed, the bill would mandate warning labels – similar to the ones found on cigarette boxes – on video games deemed likely to influence aggressive behavior. The bill was previously introduced in 2009, but didn’t make it past the sub-committee stage. While the exact text of the bill has yet to be released to the public, if Baca’s past initiatives are any indication, games rated T (for Teen) or higher will carry a warning  label along the lines of “WARNING: Excessive exposure to violent video games and other violent media has been linked to aggressive behavior.”