With Dead Space 2’s recent release we here at Elder Geek got the sudden crave for more necromorph goodness. This gave us an opportunity to go back and play a game we never got around to playing. Seems like publisher EA had anticipated this craving and conveniently lined up the release of the PS3 version of Dead Space: Extraction.

The original Dead Space: Extraction came out almost two years ago for the Wii, which was developed by Visceral Games, the same studio that’s behind the main Dead Space titles. It was a classic on rails shooter that served as a prequel to the original game. When the launch of the Playstation Move happened a few months back it seems EA saw the opportunity to port the game over to the PS3 with relative ease, using the extra time to upgrade the visuals.

And the visuals do look good, not great, but good. Since the Wii version, there has been some major enhancements to the visuals. The textures and models are now all crisp and sharp in full HD. Usually this wouldn’t matter that much, but in a game this dark every detail counts. Not only does it improve the sense of immersion and atmosphere a game like this is supposed to have, but grabbing that ammo clip in the corner of your eye kind of requires you to see it in the first place. Technically they haven’t improved the lighting or particle effects that much, but given that the game is now in HD, they are much more apparent and smooth. 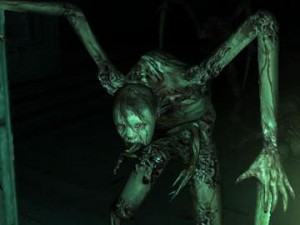 They’re back and beautiful!

The other major change are of course the controls. You can play the game with the regular dual shock controller and have a lot of fun, but for the best experience you should really use a Move. You don’t need anything other than a Move controller and the PSEye; no navigation controller or additional Move. That said if you want to play two-player, you can, but that requires an additional Move controller. Two-player in this game basically boils down to dual wielding guns, as it does in most on-rails shooters. There’s no split screen or additional story character, instead the game simply adds another crosshair and inventory to the screen. The controls themselves work really well, when properly calibrated they’re pretty much 1-to-1, or close enough that you wouldn’t know the difference. It should however be mentioned that if you’re planning on playing this by a desk at a monitor setting everything up could be a bit of a hassle as the PSEye has a harder time calibrating when the player sits so near the screen.

Gameplay-wise not much has changed even between Extraction and the original Dead Space. Sure, movement and camera control are taken out of the players hands, and the RPG system is toned down, but the fundamentals remain the same. You still traverse cramped sci-fi looking hallways while fighting off the horrific necromorphs, even with the exact same collection of weapons. Also returning are the telekinetic powers. You can pull, push and throw objects or slow down time. Using the telekinetic powers in conjunction with precise shooting will become crucial as the game nears its end.

So don’t worry. Shooting off the limbs of your enemies is still as fun as it always was, and still feels different and fresh. But this being an on-rails shooter there are of course a few unique features. Populating the environment are frequent pickups like audio logs, weapon upgrades and ammo. To pick up these you have to fire your telekinesis ability towards them, and you better be quick, because they’ll be off screen in a second. Once in a while you’ll also be given control of the camera for a short period of time, in order to scour the surrounding environment for hidden ammo and other goodies. In addition, the player will encounter branching paths. In these situations you’ll usually be asked to choose between two or more options, though some can turn out to be dead ends with a monster closet or two thrown in for good measure. 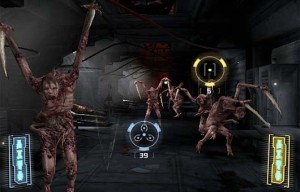 Two player can be really fun, thought it removes any of the potential scares you might have gotten.

But as everyone knows, you can’t have a horror game without good sound design, and the game definitely excels in this area. First of all, the voice acting is superb. The characters themselves are pretty by-the-book but the actors manage to make all the difference. Second, the ambient sound does a great job of creating an unsettling sense of place while the music ramps up the stress levels at the appropriate moments. I have nothing to criticize the sound design for, it’s simply superb.

The story is pretty central to Dead Space: Extraction. Not only do you find optional audio and text logs scattered around the environment, but every so often the characters in your party of survivors will banter off each other and the main character. For most of the game you will be followed by three other survivors, one love interest, one tough guy and one arrogant rich guy. The script itself is mediocre, but it’s built on a fantastically interesting universe, and the voice actors do a good job of enhancing the experience. Beyond that, the pacing is wonderful. Every cut-scene is scattered evenly between the action and lasts just long enough to make you intrigued and addicted. I won’t spoil any details, but rest assured that if you found the original Dead Space intriguing you won’t be disappointed by Extraction.

All in all it’s a fantastic little game. It doesn’t last very long, but the multiplayer, bonus levels and a hardcore difficulty level make up for that. We recommend getting the PS3 version if you’ve already got a Move controller, but if you don’t the Wii version is probably your best alternative. While playing with the standard dual shock is still fun, it’s nowhere near the same experience. This is a definite buy! Good luck surviving the necromorphs!