Another in a seemingly never-ending line of niche anime titles from NIS, Hyperdimension Neptunia seems like one of those games that will delight the otaku crowd while simultaneously affirming non-JRPG fans’ hatred for the grindy sub-genre.  If the game actually worked, then that would be the case.

But the game doesn’t work.  Set in the universe of “Gamindustri,” you play Neptune, a young girl who’s just pubescent enough for the plentiful sexual innuendo in the dialogue and artwork to straddle the fence between pedophilia and ephebophilia.  You start out on Planeptune and will eventually journey to the lands of Leanbox, Lastation and Lowee.  The plot involves the “Console War” and makes absolutely no sense, but then again it’s all just a platform for cheesy jokes and a way for the game to showcase the character illustrations, many of which feature as much boobage as a Teen rating will allow. 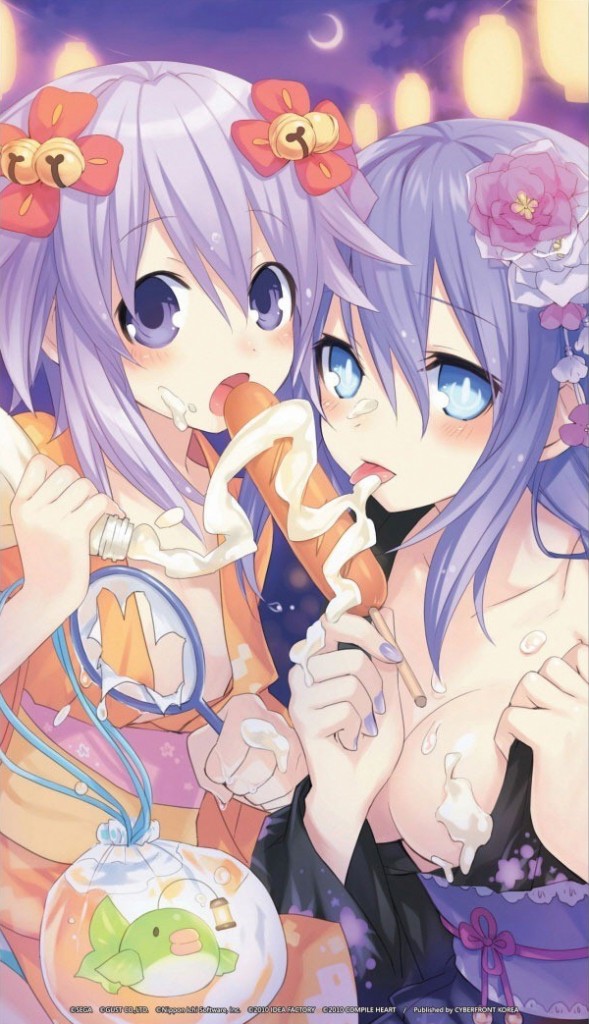 I lost track of the plot after the first cutscene, which largely revolved around four goddesses comparing breast sizes.  This segued into a scripted battle sequence, followed by the introduction of Neptune and Compa, whose initial meeting ended in bondage.  In actuality, each character represents a different aspect of gaming.  Neptune was inspired by the ill-fated Sega Neptune console, and the goddesses Noire, Vert, and Blanc represent the PlayStation 3, Xbox 360, and Nintendo Wii, respectively.  The main villain in the game is Arfoire (whose name is pronounced like the R4DS flash cartridge that allows “homebrews” and “backups” to be played on the DS) and characters like Compa, IF, Nisa, and Gust are inspired by the companies of Compile Heart, Idea Factory, Nippon Ichi Software, and Gust.  The cast list is rounded out by some cameo appearances from Sega characters from franchises such as Altered Beast, Shinobi, and Space Harrier.

The plot had potential to be a humorous satire of the gaming industry, fanboyism, and “console wars.”  But too often, the weakness of the writers shows through as time and again they retreat to pedestrian sex jokes that will amuse a teenager but leave most people bored.  Most cutscenes are just inane chatter and all of them go on for far too long.  They can’t be skipped, either.

But then again, no one was expecting a brilliant narrative from Hyperdimension Neptunia.  In fact, it’s almost expected that anime JRPG’s be as corny as possible, not unlike pornography.  However, unlike the latter, there are no redeeming qualities in Hyperdimension Neptunia.  The painful non-interactive segments seem like gaming gold when compared to the times when the player is forced to endure the stiff controls, unyielding camera, and broken game mechanics.

When I say “stiff controls,” I mean stiff.  Your nubile character handles like a bus and the camera gets stuck in more awkward positions than Ashlee Simpson on SNL.  What’s worse is that all that the developers (Idea Factory) needed to do was to create something that would allow players to traverse the boring hallway-laden dungeons of the game.  That’s it.  There’s no platforming and everything is handled by the analog stick and two of the face buttons.  It’s inexcusable to have fucked it up so royally.

Complementing the utterly ineffectual movement controls is a battle system that, surprisingly, won’t make you want to savagely beat someone because you can’t contain your anger.  A simple combo system is mapped to the face buttons and it’s actually, dare I say, “fun” to experiment with them.  Of course, all fun is fleeting seeing as the developers made it so you can’t manually heal your characters

I question the logic behind that decision.  As a gamer, it seems like the worst design decision ever made.  It’s not one of those instances of a stupid mechanic that briefly appears, pisses you off, and then, thankfully, is never seen again.  Even good games have those.  No, this is an example of the developer, perhaps out of sadism or maybe incompetence, completely crippling the player.

With no way to just use a potion or the first aid skill, you instead have to rely on an auto-heal system.  Using AP points, you can set it up so your characters heal themselves when their HP drops below a certain percentage.  However, this is limited by how many AP points you have.  At first, you only have 30, so until you level up, the best you can do is 30%, meaning 70% of the time, your characters will accept the drop in HP. 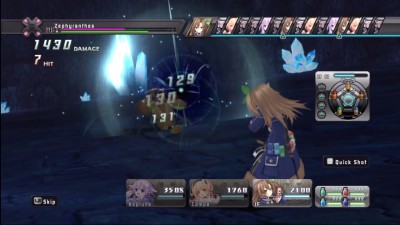 The combat is fun, but it doesn't compensate for the rest of the game.

Now this wouldn’t be so bad on its own–it’s a problem that can be solved by grinding low level enemies until you get enough AP.  But there’s another fatal flaw in the system.  Your characters are unable to recognize that their health is below a certain percentage unless an enemy hit is the cause.  That may sound complicated, but essentially what it means is that you can have the auto-heal set up, but your character will remain stuck at 1HP because the game only “checks” your HP directly after an enemy attack.  Furthermore, you’d better remember to set up the auto heals as soon as a character enters your party because otherwise, you’re pretty much screwed.

It’s a prime example of a developer trying to fix what isn’t broken.  The manual heal system has functioned just fine since the 1980’s and there was no reason to change that.  As a result of the colossally stupid decision on the part of Idea Factory, I ended up getting stuck in the third dungeon with no way to move forward or backwards because two of my characters were stuck at 1HP and I was powerless to help them, despite having over 50 potions in my inventory.  So I had to restart my game and make sure to grind a little bit so it wouldn’t happen again.

There are so many glaring mistakes in this game that I’m astonished it made it to release.  Actually, no I’m not–because there’s an established fan base who have preordered the premium edition of Hyperdimension Neptunia just…because.  Maybe there are some masochists out there who will appreciate the difficulty of the game, but it’s difficult for all the wrong reasons.  It’s like playing a good RPG while having a big burly man repeatedly punch you in the junk. 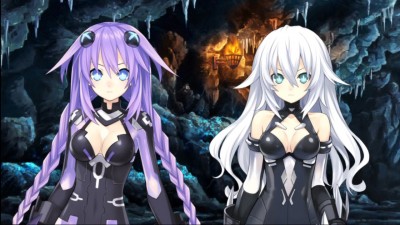 Like pretty much all of these kinds of games, the devs never take advantage of the anime art style and it's restricted to static cutscenes.

The music is grating, both the English and Japanese voiceovers are painful to hear, the in-game graphics are something like what you’d see on the PSP, the character portraits aren’t animated enough, the menus are convoluted, etc.  At this point I’m nit-picking, but the long and short of it is that the presentation does not stray from the overall goal of being a horrible game.  So I guess the strongest point is that the game is consistently shitty across the board.

Hyperdimension Neptunia is exactly what’s wrong with JRPG’s nowadays.  It’s an interactive abortion not worthy of your time or money.  It was so bad that I scrapped the three hours of footage I had recorded for a video review just because it doesn’t deserve that kind of attention and I wasn’t going to put in the time and effort.  It’s not like the developers did.  If you buy this game, you are a bad person.  Why?  Because every dollar that makes it way to Idea Factory is a dollar that will lead to the spawning of yet another abomination of an RPG.