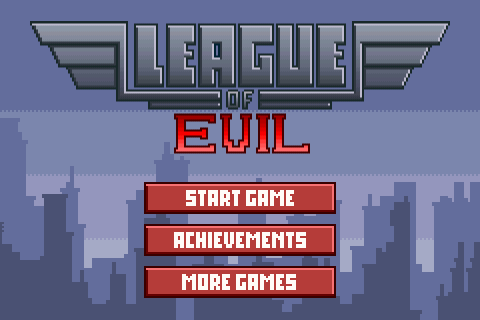 There are a few types of secret agents. Some sit far behind enemy lines and collect information via fancy tech. Others prefer to get up close, blending in with their surroundings and interacting with their marks. In League of Evil, your spy prefers to punch his enemy’s face off while running full-speed through a gauntlet of nefarious, death-inducing traps.

Ravenous Games has given us a high-octane platforming kick to the junk with League of Evil. In this small title, you take the roll as a nameless cyborg, super-spy who must stop all the evil geniuses in the world from forming a League of Evil which would obviously lead to the destruction of society as we know it. At least, I think that’s what was going on. I was too busy wiping the sweat from my palms as I dashed through 52 levels of twitch educing gameplay to really pay attention. 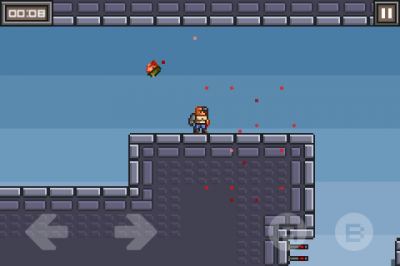 Crisp visual and action make this small app worth the purchase.

The game is fairly reminiscent of Super Meat Boy. You get a time limit to get your spy through an assault of obstacles including lava pits, ninjas, spinning hammers and electric spikes. That’s right, not just spikes – ELECTRIC SPIKES. Aiding you past these hindrances are a double jump, wall jump and punch/kick which will not only explode your enemy into a bloody mess but also allot you a few extra feet of distance on long jumps. Once you reach the other end of the level and punch the mad scientist’s head off, you get a one, two or three star rating depending on your performance. Also included in each level is an optional suitcase which, while not providing any additional bonus, still adds to the difficulty and replay value.

The graphics in League of Evil are a sharp pixel display and the music is comprised of some excellent chip tunes. I must admit I usually lower my volume when I play ipod games, but I found myself always turning it up here. There are four buttons: left, right, A and B. While these controls are surprisingly responsive, the precision required to perform some of the more intricate maneuvers falls short due to the lack of force-feedback on the mobile device’s touch screen. Still, the game can be completed in a fairly short amount of time (4 hours) if you play straight through.

Although a bit short, League of Evil offers some much needed pulse pounding fun on the ipod/iphone/ipad. When you start hitting those jumps and sliding under swinging hammers to grab the briefcase and still get three starts, you can’t help but feel like the best video game player on the planet. That, along with trophy support sponsored through Apple Game Center, leads to a must but on my list: especially with the $0.99 entrance fee.

Update: Ravenous Games just added 30 new levels, 3 new enemies/hazards, new music and artwork as well as 18 “Impossible Levels”. So seriously… get out there and buy this.

One thought on “League of Evil Review”