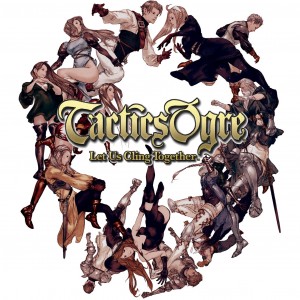 Like Final Fantasy Tactics: The War of the Lions before it, one of the most beloved of  tactical RPGs in Square-Enix’s back catalog is seeing a PSP remake near 10 years after its initial release. This time around, its Tactics Ogre, released originally in Japan in 1995, whose re-imagining is getting the old team back together. Nearly all of the core designers have re-filled their roles in this portable enhancement, the end result being the definitive version of an already tight and beautiful strategy experience.

One of the more immediate polishing jobs is the game’s dense story. Yasumi Matsuno (Vagrant Story, Final Fantasy Tactics) was brought on to re-imagine, and at certain points re-write, sections of the original script. Not unlike its Final Fantasy successor, Tactics Ogre received a sub-par port when it was brought to the States in 1997 on the original Playstation, the shoddy development arguably hitting the game’s narrative the hardest. Not so here, as the script has been re-tooled for smoother understanding, Alexander O. Smith and Kajiya Productions headed up the game’s superb localization. Tactics even manages a less posh dialogue style than FFT: War of the Lions, so the bar for entry level players has been nearly erased. 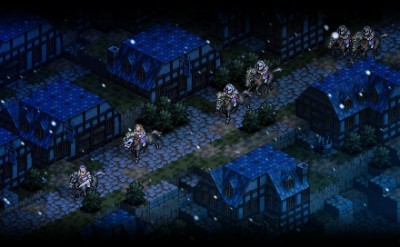 Players control Denam, a fervent Walister nationalist, whose rebel forces aim to fight back against the multiple oppressive countries, militias, and factions. The world of Ogre is a gigantic political map of conflicting ideologies, but Denam still manages to gain his own small army over the course of the game. At several points in the story, Denam is faced with major decisions that only effect the rest of the game’s storyline, but who remains in his army and Denam’s own personality. While morality is measured by the D&D standard Good-Neutral-Evil, its stunning to see just how well these decisions are integrated and effect the overall plot, especially paired against the black and white dichotomous choices that litter most modern games.Gamers don’t have to fear going through the game ten times to see all the scenarios however, as the game’s New Game + feature, The World tarot card, allows players to revisit any point in the game’s epic narrative and take a different turn.

This isn’t just an interactive story however, as Ogre‘s already masterful blend of strategy and customization have been tweaked to as near to perfection as the mechanics would allow. Most tacticians will find the basic battle structure immediately familiar, each skirmish taking place on an isometric grid, slightly faster and non-linear than Final Fantasy Tactics. Character classes run the traditional gamut Knights, Beast Tamers, Ninjas, etc. with each class bearing unique skills to be achieved and utilized in the battle. The player moves characters (maximum 12 to a battle) across the battlefield and perform actions based on level, ability set, field and enemy placement, and equipment. Characters earn “battle points” and spend them on dozens of skills, usually restricted by level or class. Only a handful of abilities can be assigned at a time, so its best to devise a skill set able to weather most encounters, and work with the most of other character’s abilities, at any given time. 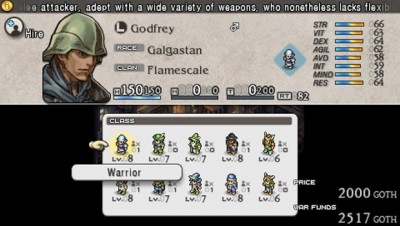 Unlike other TRPGs, character abilities do not transfer with any character’s class change, so maxing out a single class per character is recommended. In fact, multi-classing is generally discouraged, as most statistics are tied to classes rather than each character evolving his own strengths. This change helps the game from falling into its original crippled leveling trap, practically erasing all need to micro-manage lesser NPCs to the same level as Denam in order to have a chance in most battles. Its one of the biggest changes made on the way to the PSP, and its absolutely for the better, although veteran players may feel the change dampening Ogre‘s once noteworthy difficulty. This isn’t a game where your army can each be an invincible demi-god.

The battle-hardened gamers may have a point however, as a lot of design choices in this transition do seem to have made the game a much easier experience. Healing items are infinitely more plentiful, exclusive character classes have opened up to regular NPCs, and the PSP has a new Chariot tarot system, which allows up to the first 50 moves in battle to be saved and rewound back. All of this may harken a new age of playability for the game and its kind, but those used to the original depth of challenge may find themselves breezing through formerly more rewarding degrees of difficulty. Granted, the Chariot system is optional, but the rest of the changes have a more noticeable and unavoidable impact. 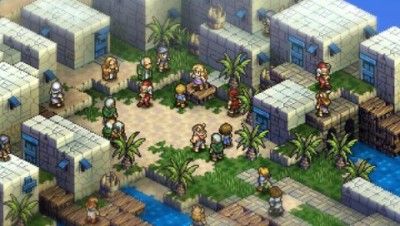 Its not all in the newcomer’s favor, however. The original graphics have been preserved almost to a point of fault, as the sprite’s limited animations in and out of battle make the game’s story one larger experienced out of static text clouds. Character portraits, on the other hand, have been re-drawn to the pixel, and shine with new life and detail. The game’s soundtrack has also been re-recorded, and even the original’s most tediously repeated tracks sound infinitely better under the new mix. With so much effort put into the audio remastering, it does still constantly drawn attention to the lack of changes made in the animation or visuals in general. This is especially problematic when it comes to the interface’s many, many menus. At times even the simplest item shop equipment hunt is bogged down in needless stat omissions, at times making it impossible to tell how much an item is statistically superior (or even relevant) until it is purchased and equipped. Most of these interace issues disappear once menus become memorized, but its no excuse given the breadth of attention given elsewhere.

Overall, unlike most remakes coming out of the Square-Enix nostalgia factory, Tactics Ogre: Let us Cling Together is a new opportunity to discover a truly lost gem of the strategy RPG world. The changes made to the core gameplay may irritate those used to a more unforgiving level of challenge, and a lot of seemingly common sense visual and interface changes have been overlooked, but gameplay has been improved over an already near masterpiece level, and the epic and morally mature storyline can finally be appreciated in English. Even those that managed to find this in its limited Saturn release need to pick it up here. Any excuse you had to miss this masterpiece has been officialy wiped out.

3 thoughts on “Tactics Ogre: Let Us Cling Together Review”