It’s been one year since Awakening and nearly a year and a half since Dragon Age: Origins (Elder-Geek’s 2009 Game of the Year) first graced our lives back in November of 2009.  Therein lies the first of many glaring issues with a game that feels anything but complete.  Be forewarned, this review isn’t going to beat around the bush.

The game begins by taking a unique approach that was touted by BioWare early in the revealing of Dragon Age 2.  The entire story is told by a dwarf and soon to be companion named Varric, who’s in the process of being interrogated sometime in the future.  As such, some of the events you play through are embroidered quite a bit.  When such exaggerations are occurring you find yourself taking on ridiculous hordes of enemies and blowing them to pieces… literally.  Hey now!  Who hasn’t heard a story that sounded a little too far-fetched to be true?  As alluded to, the first time you’ll experience this is at the start of the game in what is more or less a tutorial for your selected class.  The second time is an utterly hilarious moment in the game.  You’ll notice I don’t say, “third time,” because twice is all you’re going to get with this highly underused game mechanic.

Underuse and overuse is the name of the game when it comes to the Dragon Age 2 experience.  Not too long into the game most of you will find yourselves murmuring,”haven’t I done this enough,” or, “why was this simplified so much, I want more!” For those of you who basked in the grandeur that was Origin’s homage to classic cRPG’s like Baldur’s Gate, say goodbye!  Goodbye? Origins picked a fight with the wrong templar and has been made tranquil. 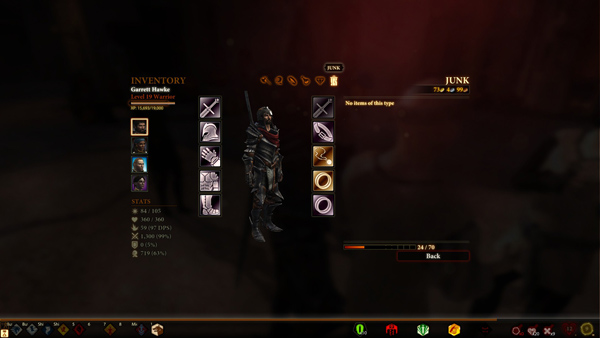 There's a lot of it!

Simplicity, simplicity, simplicity, because that’s what everyone said was the biggest problem with the last game, right? It wasn’t simple enough?  Yeah, I don’t remember that either.  The logic in adjusting  some aspects of the game to cater to console gameplay is understandable.  There’s actually been some solid moves in terms of combat to cater to controller usage.  Sure it’s not quite as pause-play tactic based as Origins was, but it’s far more active and in your face.  I, for one, found the change grew on me as I gained more abilities, and before long I was perfectly fine with it.  What’s not fine however is the loot and armor changes, repetitive areas, dialog and analogous non-resonating stories.

The loot in this game has been streamlined to the point where there’s an entire category for ‘junk.’ You’ll be looting quite a bit of junk in this game… also armor; most of which you’ll sell since you can’t use it.  Your companions won’t be able to equip it either since that was apparently deemed too complex for fans of the RPG genre.  At least you’re able to share amulets, belts, rings, and weapons amongst your party.

Get used to this!

Repetitive areas.  Why? I mean this.  Why the heck is this an issue from a proven developer?  I am still completely floored by how cyclical this game is.  In the twenty-nine hours it took me to beat this game top to bottom (that’s sixteen less than it took me for Origins) I saw a few hundred load screens (yay immersion) as I traversed back and forth to the same… areas… over… and over… and over.  The movie Waterworld had more variety in locations.  Be prepared to do ‘different’ side-missions in the exact same cave, dock or sewer.  It flat out destroyed the immersion the game had for me because it was so damn unbelievable.  It was like constantly waking up from the matrix, only I didn’t know kung fu.  Don’t expect much variety in the types of enemies you encounter either.

If you’re illiterate this is the dialog system for you.  Top right = good, middle right = joke, bottom right = bad, bottom left = romance/cop, middle left = investigate, etc.  Each choice even has a symbol just to make super sure you know what you’re doing!  I really don’t need to go much further into this.  Any semblance of gray area or thought that went into deciding which dialog option to go with has been butchered.  The wheel works fine in a game like Mass Effect 2, not here.  The addition of voice acting to the main character was definitely a smart decision though.

Stories have always been a hallmark for BioWare.  When something is even a bit off, they’ve always had an engaging story to make you turn the other cheek.  There were some bold decisions made with central characters that may or may not die, which was a good change of pace.  Other than that, the amount of whining, stupidity, and overall predictability from both the mages and templars made the central story far less impactful.  Witnessing characters turn on their core beliefs in a whim never makes sense to me.

Where’s the section about graphics?  Good point!  There was skimping on that too.  Kind of a theme really if you haven’t noticed yet.  Particle effects, fire, ice, etc.  looked better in Origins. Poor textures persist even with the HD pack.  Lots of low quality, stati0nary NPC’s hanging around too.  For a city that’s flooded with refugees it’s rather fascinating how empty it is.  Being frank, graphics really aren’t that big of an issue.  They don’t carry a game like this, and for what it is it’s fine and shouldn’t sway you’re decision whether or not to play this game. 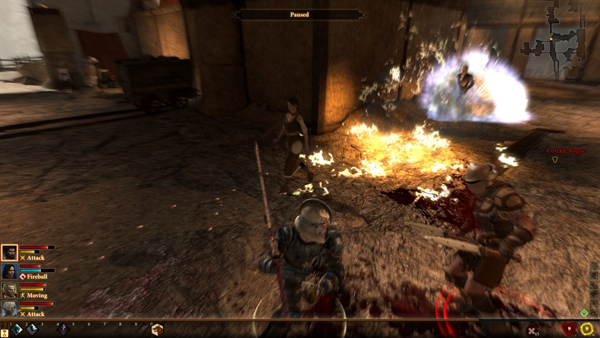 The NPC's don't seem to react to anything...ever.

One often wonders how such a radical change can occur.  I doubt this is how it went down, but after playing through the entire game this is truly how it made me feel as a gamer who spent $60 for this regrettable experience.

Some Guy: “…you know what would be really quick to make for that crazy short deadline we have?”

Some Guy: “We take a page from Origins.  Let’s just redo the entire social and political class thing we had going on in Orzammar and then take the mage and templar feud from the Circle Tower and make an entire game out of that!”

Another Guy: “That would actually be pretty neat for the main story.”

Some Guy: “Main story? No, this is going to be the entire game. Oh, and to speed things up for level design let’s just make everything take place in a district divided city like Orzammar, but make it human dominated instead!”

Another Guy: “Won’t people get tired of being in one heavily separated city for an entire game?”

Some Guy: “Yeah, but to lessen that glaring issue  we can have a few linear path driven zones outside of the city to give them some fresh air.”

Another Guy: “This sounds like it’s going to weigh people down after about ten hours in.”

Some Guy: “Well… we can add a few identical instances for people to do their side-missions in when they’re not fighting on the streets of the city. Lots of people enjoy grinding the same thing over and over.  Look at MMO’s!”

Another Guy: “Yeah… ok, I guess. A lot of the fans of the past game aren’t going to be too happy with this.”

Some Guy: “This is a business, not a dream factory. We have a deadline and unfortunately cutting corners is the most realistic rout to achieve it.”

We all have to live in the real world. Game companies exist to make a profit and this game comes off like nothing more than a cash-in for a series that shocked BioWare with its success in late ’09.  I have an immense respect for people working in the game industry.  They’re everyday people like you and me, and most of them have an intense passion in what they’re doing.  It’s always a sad sight to witness a game such as this; especially from a respected company that’s had one of the best track records in the entire industry.  It’s easy to want to stick in BioWare’s corner and give it more due that it deserves, but how does that help?

Origins was an amazing game, but it wasn’t perfect.  No game is.  However, instead of releasing  a game that evolved upon its foundation, we have a shell of its predecessor in nearly every way.  Even if Origins had never existed, this game would still be frowned upon.  There’s simply no excuse for the fundamental flaws that permeate throughout this game.

Here’s hoping this is a fluke they learn from and Dragon Age III isn’t coming out for a few years.  In spite of how much I’ve lambasted this game, I’d recommend renting it just to witness what I’ve seen so you can condition yourself to avoid such products in the future, regardless of the attached franchise name.  I guess that’s still denouncing it!  A purchase is out of the question unless you’re the kind of person who absolutely adores supreme repetition, in which case this game was made just for you.  To the fade with this one!