A few years back a game was advertised called Two Worlds. This game promised much and delivered little. The experience was a bitter disappointment for me, as I had bought fully into the promising hype machine spun from this supposedly rich offering. I usually wait until months after a game has been released to purchase it. But this one I could not resist, because it has swords and castles and what not. So I ordered it. Hell, I pre-ordered it. I never pre-order. Yet there I was, giving a store my money weeks in advance.

Lesson learned. Mind you, I still played the hell out of the original Two Worlds. It was just not what was promised. Not at all.

However, that was then and this is now. And now I’m here to talk about Two Worlds Two. A game I currently have two copies of. Which adds up to like… 6 worlds?

Anyway, let me clarify something here: I don’t have a lot of time to play games. I’m not looking to burn through a title and jump right into the next one and so on. I’m looking for experiences I can savor, either by myself or with my friends. Additionally, I grew up playing Dungeons and Dragons and own about six or seven swords and one crystal ball. So you will now understand that when it comes to games where I can explore deep caverns and tombs while using a torch for light in one hand and a sword in the other, I get very interested. Some would argue that I get biased. I disagree. I get super biased, but I also hold the game to a high standard. I don’t just want to accept a game because it matches my interests. I want a game that is enjoyable to play that matches my interests.

It turns out that what I have been wanting is Two Worlds Two.

I haven’t played the campaign (single-player) at all yet. Right now I’m focusing specifically on the multiplayer aspect. Single-player may very well be the best thing ever, and eventually I will explore that aspect. For single-player wanderings in a mythical world where I hit things with swords and recover loot from corpses, I have other games I’m still picking away at. For multiplayer, I have nothing. So multiplayer it is.

(And yes, I have heard of World of Warcraft. If I want to play a game where I pay each month and have to do inane quests that all seem to revolve around collecting 23 items by killing 23 things over and over again, I know where to look.) 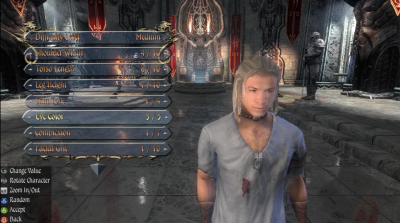 I started my quest off as a dwarf. My friend Rob started as a mage because no matter what game it is that he plays, he somehow wants his character to have “cool powers” that are kind of like “Green Lantern”.

But me, I like to use classic medieval style weapons. So I was a dwarf with an unfortunate lack of beard and a large axe. Making these characters took a ridiculous amount of time. But that was no fault of the game. It took time because we savored it. Also: We had been drinking. But I’m going to stick with “savored”.

Anyway, we played through the first level and found it fun. A lot of wolves to kill and a lot of countryside wanderings. Fun, but not quite what I wanted. Going on medieval fantasy quests where the sun is shining and the fields are green while murdering innocent wildlife was never a part of any fantasy novel I ever read.

Then we got to the second level and everything changed. We entered into the old mines and found our way into an ancient crypt. We spent about 5 hours slowly exploring these underground passageways. We fought Dead Knights and Groms and giant monster with no heads. We opened doors by standing on switches and we got lost in the passageways.

To be fair again, that last bit was also because we had been drinking.

As much as we were enjoying ourselves, we then decided that we needed to start over with new characters. This time I chose a ranger, which really means I chose an archer.

Archery was one of the better aspects of the original game, and I found it equally enjoyable here as well. Mind you, you get your ass kicked pretty quickly as an archer. But as Rob was a fire mage (again) he was able to offer some protection. Okay, that’s a lie. Rob left me to die more than once. But that’s okay. Because the people who made this game understand that sometime you need to switch weapons in a hurry. With a press of the D-Pad, I shift from archer to fighter. And it’s not just weapons that shift. Its armor and magical rings and head gear and pants. You can hotkey an entire outfit. The depth this adds to the game cannot be understated. It allows you to shift gears quickly, making what would be a very linear game as an archer a much more well-rounded experience.

We went through the dungeons once more, and enjoyed them just as much as the first time. We also had developed a deeper understanding of the intricate weapon construction and spell casting systems. There is a steep learning curve here, but one that is definitely rewarding when you unravel the mysteries. 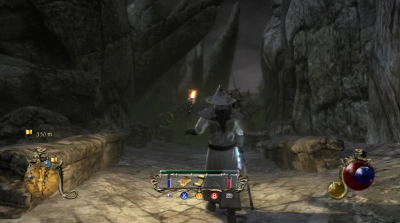 I still have a lot to explore in this game. That’s likely to be the case for many months. Like I said, I play games slowly. I’ll start this one up whenever my multiplayer schedules align, and I will eventually play the single-player mode. That will take… who knows how long. The game appears quite massive. And as an example of my game playing time-line, I only just finished Oblivion. So understand that my “review” here is not a comprehensive examination of this game. It’s more of a view of this game through a specific lens. Two Worlds Two represents the best example I have found for a small scale multiplayer medieval fantasy exploration and combat game. It’s what I’ve been looking to play for quite some time, and I am quite happy with the experience.

Is this game perfect? Oh god no. For me, I would like to see a first person mode. I’d like to see a greater variety of creatures. I’d like to have an easier time unlocking new moves/spells/whatever in the multiplayer campaign. I’d like a better lock-on targeting system and an easier way to keep track of my teammate’s locations and status. I’d like an interface that was easier to comprehend and I’d like the manual to actually have all the information needed for understanding the game. I’d also like the multiplayer campaign to be a bit less linear and I’d like more character creation options. I want combat in a game like this to take heed from classic fighting game controls. I want dwarves with long beards and halflings and giants. I also want a lifetime supply of hostess Crumb Cakes and a golden winged donkey that knows how to fix my car when it has trouble.

Nothing in life is perfect. But Two Worlds Two is close enough to it for me to be happy with the game and hoping for a Two World’s Three. Or Three Worlds. Or whatever. We don’t use numerical ratings here. And for good reason. See, I would give this game a 13 out of 10. Someone not infatuated with the genre might give it a number deep in the minus. You cannot measure your potential enjoyment by an arbitrary numbering system designed by a third party. If you like this kind of game, go rent it. If you like what you rented, go buy the game. And if you want to explore the dungeons in multiplayer mode with someone who may or may not be sober, send me a friend request on Xbox. Gamertag = Kid Gravity.