If you took Okamiden for the Nintendo DS and removed the whimsical charm, impressive style, thought provoking bosses, supplanted the dialogue with mindless warbling, and just lowered the overall quality a few pegs than you would have an average Zelda game. If I could alter the past I’d say that most Zelda titles are sub-par Okami rip-offs. That said,  it looks like this beaming light which shines out of twin screens will be dimmed just as harshly as the amazing original. 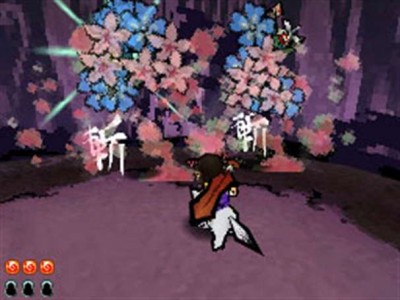 Okamiden takes place nine months after the end of the first game, and although I wholly recommend you play the first before you try this new adventure, the game manages to provide a decent synopsis before it begins. With Amaterasu out of action, the land of Nippon has enjoyed nine months of peace. But out of the earth comes another great darkness that shadows the land, which kinda sucks. Most heroes get at least a year of peace before everything turns gray again. You’d think Ammy coulda’ stuck around for a bit just to make sure everything was good. Still, with the world devoid of life and color the burden of heroism falls on the Amaterasu’s young pup, Chibitaratsu.

The game begins with you traveling back to the original village from the first game and will carry you through many of the original locations, which are lovingly recreated on the DS’s small screen. Might I say, this game is beautiful. The intricate sumi-e styling lends itself magnificently to the DS’s low poly count and creates quite possibly the most beautiful DS game to date. From the rolling vistas to the minute animations of characters, this game delivers ten-fold in the graphics department. The only downside to the vibrant colors and lush environment is the need for load zones and the occasional pop-in of foreground elements, which can be a tad annoying when you’re searching for barren trees or cursed zones to cure in a particularly large field. The effect is a tad disappointing but in no way keep you from constantly marveling at every little detail.

As much as I hate comparing this game to what every reviewer will, Okamiden follows a familiar Zeldesque progression. You move from dungeon to dungeon finding some treasure (in the form of a brush stroke) to aid in your fight against the inevitable boss. However, unlike Zelda, Okamiden manages to disguise its dungeons under meaningful tasks. Sometimes you’ll be saving a lost friend from a demon catfish and others you’ll be storming a haunted theater to get the lead actress on stage in time. No matter what you end up doing, you’ll always feel invested. The characters, the environments, and the world all carry such life that you will always be emotionally invested in the next task. 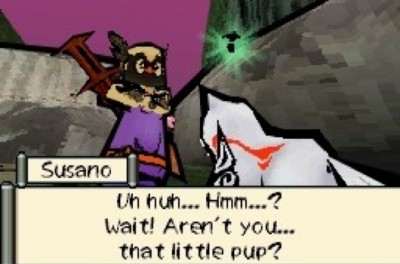 Many old characters play a part in the story.

Surprisingly for a 3D (the old kind, not the “innovation!” kind) adventure on the DS, the camera and battle system end up being incredibly intuitive and fun. Much like older Resident Evil titles, the camera moves from various set points. This sets up several elegant vistas and alleviates much of the strain that crops up when placing low powered 3D games on the DS. Additionally, the stylus lends itself flawlessly to the brush attacks that are required in many of the situations. Most of the time you can dodge around striking with standard attacks, but as you progress you will unlock brush strokes that you may utilize in battle. During any moment you can tap the left or right button to enter the drawing screen and swipe a straight line to slash, a circle to bloom or draw a bomb to blow your enemies to smithereens. While the enemies are fun, the bosses are where the combat shines. All the powerful demons are gigantic on the little DS screen and you’ll have to use your wits and powers to devise the enemies’ weakness. 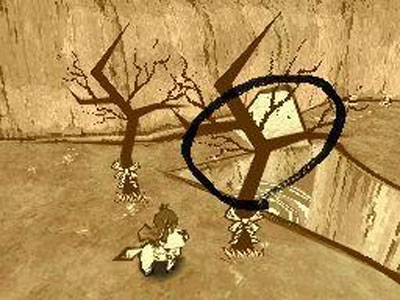 When it’s all boiled down, Okamiden’s true allure is from its character and story. After I realized that I was going to be seeing a lot of familiar venues I felt disappointed, but as I traveled through the game I realized just how much I missed Nippon. Every person you meet is a fully developed character with goals and a personality. Within my first hours of playing I felt incredibly attached to every person I met. Moments intended to be emotional were just that, and the levity injected into each sequence really resonates in the world. If anything, Okamiden is worth playing just to feel the emotional attachment of a young boy and his dog.

Most surprising is the length of Okamiden. Not only is the main quest quite long but there are plenty of small extras to pick up along the way. Every area has a specific gathering quest that you’ll need all your powers to compete as well as a slew of trees and cursed zones to revive. Every time you complete one of these tasks you’ll get a little praise and by filling up your praise bar you will gain more ink and health.

The only places were Okamiden stumble is in its difficulty. You’ll never find yourself too challenged by any puzzle or enemy. Most instances revolve around drawing one of your many brush strokes to alter the environment or lead your partner to some far away switch. While the partner system is a great addition, I never found myself confused by the best way to direct my companion (who can fend for themselves so don’t get escort mission blues). For some, that may be a part of the allure but I could have wished for a little more challenge in the puzzles, dungeons and the combat.

Okamiden is a gem of a title. However, with its close proximity to both the 3DS release and that of Pokemon Black and White there is a good chance this may be the last Okami title we ever see. Okamiden has more heart than any other DS game out there. It is something I feel like everyone should experience and yet it may fall to the wayside never to be seen again. Although I admit some of its strongest points only show if you haven’t played the first (and why wouldn’t you Mr.Partoftheproblem) I highly recommend it to anyone who enjoys fun. And if you don’t like fun, then stick it out to see what remake Nintendo gives you next year.