The once-popular genre of “Dungeon Crawlers” has almost entirely died out in the recent decade. Aside from the elusive Diablo III, it almost seemed like there would be no more single-player focused games where players would travel from town to town in (usually) a fantasy-themed world, carving their ways through dungeon after dungeon filled with enemies, and continuously upgrading the equipment of their ever-evolving characters. The only option open to fans of the genre seemed to be to sign up for an one of the many MMORPGs, which have incorporated many of the elements once found in these games.

Runic Games, a studio formed of former Blizzard North and Flagship Studios employees, released Torchlight in October 2009. It was a game reminiscent of classic dungeon crawlers like Diablo, Dungeon Siege, and the Baldurs Gate: Dark Alliance series… though it condensed these classics into a “light” experience. Still, the game became a tremendous success on the PC. Now, almost one and a half years after the game was originally released, the game has finally made it’s way onto the Xbox Live Arcade.

Seeing as most dungeon crawlers were specifically designed to be played with a mouse and keyboard, one might expect that a console-adaptation of such games would end up to be but a shadow of the original version. Developer Runic Games has addressed this issue by entirely overhauling the control scheme for the game, and making additional changes to several key-aspects of the game, which has resulted in an excellent downloadable title.

Despite originally being designed for mouse & keyboard input, the Xbox 360 version of Torchlight handles incredibly well. Though some issues remain, the fact that one is able to control the character directly, rather than through an endless number of mouseclicks, is most certainly a welcome innovation.

In short, this new control scheme handles surprisingly well. Players move around by means of the left analog stick, which now directly controls the character. The fact that you no longer have to press the mouse buttons a million times feels refreshing, and the game feels a lot more relaxed overall when played with the controller. Players can rapidly switch between two sets of four spells and abilities, meaning that console players are not merely a gimped version of their PC-counterparts. That is not to say the new control scheme doesn’t also bring a few new problems to the table: targeting enemies at longer range is pretty difficult, and the auto-targeting system doesn’t always pick out the most desirable targets from a larger crowd of enemies (like an explosive barrel next to a group of opponents). Additionally, some skills don’t seem to use this auto-targeting feature at all, and are fired in the specific direction in which you’re pointing the analog stick. This frequently leads to spells and abilities being misfired and missing their intended targets by a hair… simply because a thumbstick doesn’t allow for a great amount of accuracy.

Melee attacks have also been redesigned to some extent. Rather than directly striking a target of your choosing, players can only indicate in which direction the character should swing their weapon. When swarmed by enemies, this works just as well as targeting with the mouse. On the PC, however, players were able to automatically close in on their enemies if tried using melee attacks while out of range. Even though melee attacks move your character slightly forward, this feature is sorely missed when playing with the melee-oriented champion against a group of enemies that are using ranged attacks.

The in-game menus have also been redesigned. The inventory system has been changed entirely, and now simply allows the player to carry around 50 items (or stacks), rather than the more traditional inventory system utilized in the PC version. This is a great addition, and means you’ll be spending significantly less time on item-management, and more time on slaughtering the incredible amount of enemies that hurl themselves at your feet. 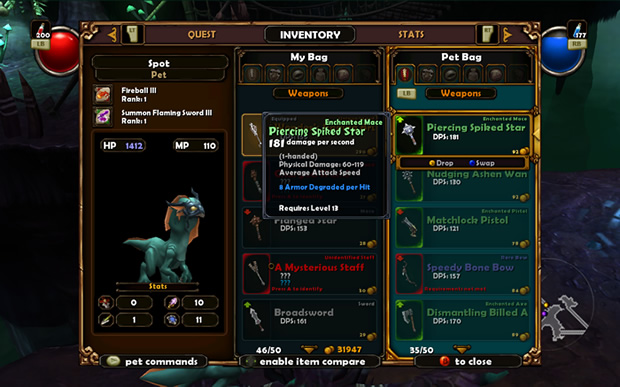 The inventory screen is intimidating when you first encounter it, but when you finally get the hang of it, it will allow you to efficiently navigate through the different item categories. Nevertheless, the in-game menus are undoubtedly one of the few weaker aspects of the console version of Torchlight.

Not all menus are quite as easy to navigate, however. The inventory screen, which has different tabs for each category of items currently in your backpack, as well as those being carried by your animal companion, is difficult to navigate when you start using it. Luckily, navigating the inventory turns out to be quite efficient, after the initial confusion has worn off.

Gameplay itself has remained unchanged from the original. The game still takes you through 35 semi-randomly generated floors of a massive dungeon, which are tied together by means of the same dialogue and events as were found in the PC version. Smaller, new features include a new type of pet (though it isn’t nearly as charming as the Wolf and Lynx), a new armor set for each of the three characters, and a few more random quests that don’t tie in to the overall story arch.

Graphically, the game has been upgraded slightly, with some of the features that were set for Torchlight II having been included in the current version. All characters are animated fluidly, and the game maintains a steady FPS even during the most intense battles. Loading times, which were an issue for some players on the PC, have been shortened dramatically, generally not lasting more than a few seconds.

The game runs smoothly, and loading times (which were an issue in the PC version) have been greatly reduced. Even during the most frantic and chaotic encounters, there is no noticeable slowdown.

Overall, Torchlight is an excellent game, and probably one of the very best games currently available on the Xbox Live Marketplace. The fact that the game is played with a controller, rather than a mouse and keyboard, makes the Xbox 360-experience quite a bit different than the PC-experience… but it feels good to be able to play this game from a comfy couch and not having to click the mouse a billion times before the credits finally roll. On the flipside, the Xbox 360 version does not support user-made mods, a feature that may be considered one of the PC-versions greatest assets.

Players who have not yet experienced Torchlight would do good to check this game out, as it is one of the highest-quality action/RPGs currently available on Xbox Live, and well worth the 1200 Microsoft points ($15, which is significantly less than the regular price for the Steam version of the game). Those who already own the PC-version will probably not find many new features in this latest version of the game, though even those who have previously fought their way through the dungeon below the eponymous town may enjoy replaying the game with the new, more relaxed, control scheme.