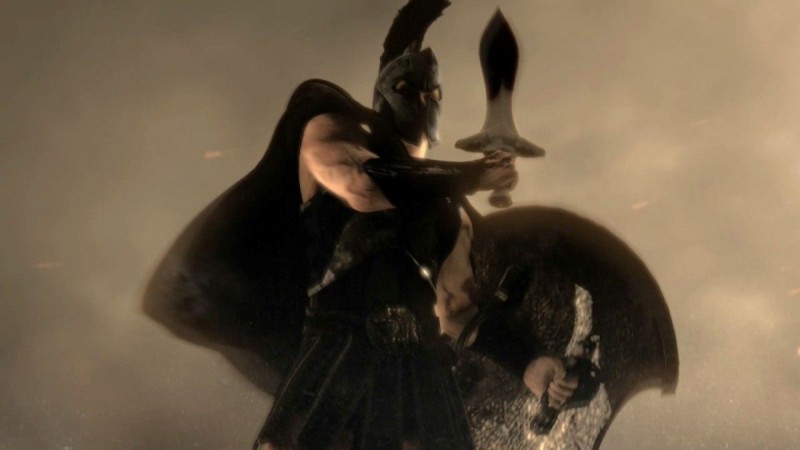 The various Warriors titles have a reputation in America for being nothing more than shallow and repetitive hack and slash games. Taking the reins from Omega Force this time around, KOEI Canada tries to change that with Warriors: Legends of Troy. What we get is a game that has the core game play elements of Dynasty Warriors, but with a small strategic twist. Legends of Troy is the first game developed by KOEI Canada. While it has its faults, fans of Greek Mythology, the Trojan War time period and action games in general should give this game a look.

Calling Legends of Troy a hack and slash is not entirely accurate. While it may look the same as the rest of the Warriors series at first glance, it is quite a bit different when you actually start playing. Legends of Troy requires more timing and patience than Dynasty Warriors and if you go in mindlessly pressing square and triangle for light and heavy attacks you are going to get yourself killed. 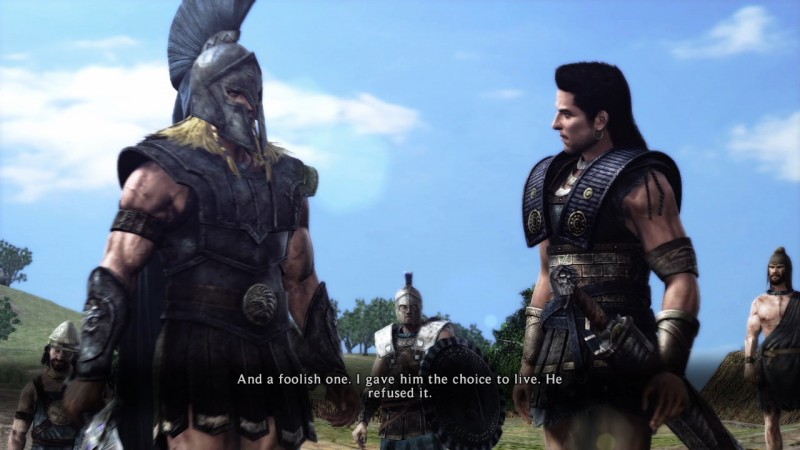 Legends of Troy is told through four playable Trojan Warriors, and four playable Greek Warriors. It is told in a linear fashion and unlike the other Warriors games you will be regularly switching characters as you progress through the story. You are thrown into a skirmish right off the bat and from there you make your way through the events that led up to the Trojan War and the war itself. The rest of the stages are varied and can consist of varied objectives, like reconnaissance, a quick skirmish, or a large scale battle. You will also encounter the various Greek Gods and see how they interact with and affect the various characters. I am not going to blatantly give away any massive story arcs, but if you are roughly familiar with the time period or The Iliad, then you will know what to expect from this game. 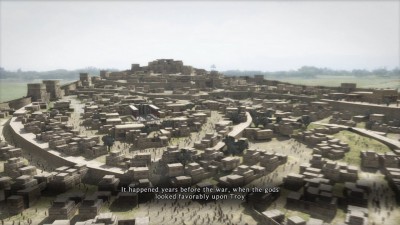 The visuals in the game generally look good, but have a few hiccups. In between chapters the narration is impressively told through the ancient Greek art style usually found on the outside of pottery and trophies during that time. The cut scenes, while not pushing the hardware limitations by any means, show the war on an epic scale and are very entertaining to watch. Most of the characters look like they are based on how they are represented in art, but with a heavy modern day makeover. They look good most of the time, but when you get up close you can some of the skin textures stretching and for some reason when specific characters pick up an enemy’s weapon during game play their own weapon disappears until they discard the sword or spear they are holding. There is also some slowdown if there are a lot of enemies on screen which can mess up your attack timing. As for the locations, I was hoping to see more of a variety. You get into towns and cities near the end, but until then you will be mostly looking at dirt paths with hills on both sides.

The audio in most of the Warriors series has been funny to me. Whether it’s the over the top hard rock soundtrack, or the hilariously cheesy voice acting, these games have never been strong in the audio department. It seems like Legends of Troy is taking a step in the right direction for these games to be taken more seriously. The soundtrack is filled with some good ambience music, but when you start fighting it will quickly fade into the background. When it comes to voice acting, some of the characters might be trying a little too hard, but most of the voice work is done well. The pronunciations of the various names threw me off a little. For example, while some people said “ah-KILL-ees,” others said “ack-ill-AY-us.” There were others like that as well. I don’t have enough knowledge on the different pronunciations to say whether they are right or wrong, but it should have been consistent. 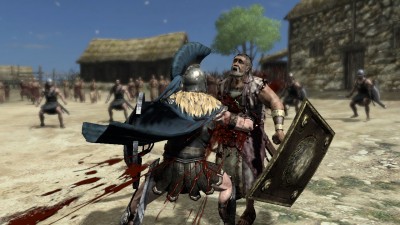 The formula of light attacks and heavy attacks from the rest of the Warriors series makes an appearance in Legends of Troy, but it is tweaked a little. The main differences are the introduction to shield based stun attacks, and the amount of patience you will have to put into the game to achieve success. There are also a few other notable differences from the rest of the Warriors series.

Let’s get right into the combat. You have the standard quick and heavy attacks that can be chained together into combos. You can also use your shield for a stun attack, and while that does not do any damage, it leaves an enemy open for a combo or a brutal finishing move. Finishing moves occur when the game prompts you to press the triangle button on screen and your character performs an ultraviolent one hit kill move that usually results in a lot of blood and enemy soldiers near you getting startled and dropping their shields. Also, the fury attacks reappear in this game. When you attack you fill up your fury bar and when it is full you can press circle to go into fury mode which makes your attacks unblockable and cause much more damage.

The most entertaining aspect of combat is the use of enemy weapons. You can pick up various swords and spears from fallen soldiers and while they do not do that much damage, you can throw them at enemies for instant kills. There is nothing more satisfying than throwing a sword at a special type of enemy and having it down him in one hit rather than fighting him for the next five minutes. It is also fun to throw them at fleeing enemies. 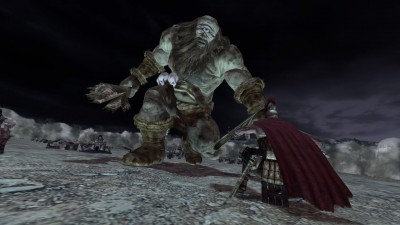 This battle took me a while to figure out

If you go into the middle of a group of enemies and start button mashing your health bar is going to rapidly drain. Enemy AI has been programmed to take shots at you when opportunity presents itself, so if you leave yourself open you are going to get hit. Patience and timing are important in this game. You can time your attacks and if done correctly you will cause more damage. You will also have to make extensive use of the blocking and rolling mechanics, especially during duels with other Greek or Trojan heroes. Sometimes they throw in a couple of cheap battles where you are expected to bring down four difficult opponents while your ally stands around doing nothing, but that only occurs once or twice in the game.

In addition to the battles with the various legends, you will also battle boss monsters courtesy of the Gods. At first these battles seem cheap and unwinnable, but when you learn the monsters’ moves and think outside the box a little, these battles become very manageable. The only problems with them are the fact that some of them last a little too long and the quick time events that occur, although they give you plenty of time to press the prompted buttons. Overall the combat makes you feel more like a mortal and less like a superhero. The characters range from fast, nimble heroes to lumbering heavyweights, but you will always have to be aware of your surroundings. This is a welcome step and I look forward to playing more games with these mechanics.

As you progress through the game and kill enemies your characters will not naturally level up like they do in other Warriors titles. Instead you will get money (called “Kleos”) to spend on various items to boost your stats and give you other advantages. All items take up space on a square grid, so it is kind of like managing your inventory in games like Diablo or Torchlight. It also has somewhat of a Tetris feel from time to time. Once you get a variety of items you can mix and match depending on your character and strategy, but on my first play through I found myself copying the same items from character to character because I didn’t have enough of them unlocked to bother changing them around. 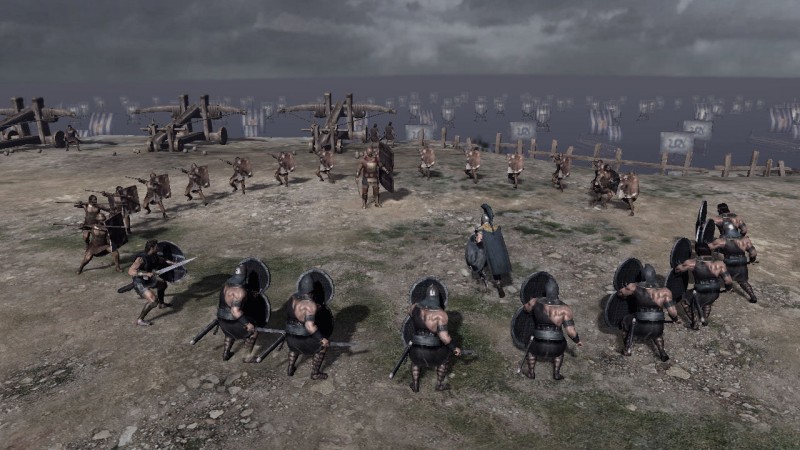 It's time to duel, but not with Yu-Gi-Oh cards

One detrimental difference in Legends of Troy is the lack of any kind of multiplayer. I am assuming it is because of the linear fashion of the story and the constant switching of characters, but a free mode where you can choose any character to fight on any stage with other people would have given the game more life. Speaking of replayability, Legends of Troy does not offer much. You can finish the main story in about 10 hours and after that you can either replay it on a higher difficulty, or tackle one of the three different challenge modes. These consist of arena duels, maintaining your Kleos counter, which is similar to your combo counter, and keeping your life bar up as it constantly depletes. These get old pretty quick and unless you are planning on getting all of the trophies in the game, you will probably be satisfied with one play through.

Legends of Troy is a great first effort from KOEI Canada. Viewing the story from the perspective of both the Greeks and the Trojans is engaging, and the game is presented well overall. The combat has evolved from button mashing to a test of patience and timing, and that style leads to some entertaining game play. While there is not enough content to justify a purchase at the full retail price, fans of action games or Ancient Greece should rent this game and give it a try.