At the very start I find it difficult to ingest what Phantom Brave: The Hermuda Triangle for the PSP is. The title is a remake of a Wii game, Phantom Brave: We Meet Again, which was a remake of a PS2 game from 2004, Phantom Brave. There is just something tactically underhanded about continually re-releasing a game over a seven year span with only slightly different titles and game changes (See Sonic Adventure for more details). Luckily, this was the first game out of its other incarnations I played. So outside of some mild annoyance over the games lifespan, the whole experience was fresh. However, the more pressing issue is the games rampart mediocrity.

Phantom Brave is by no means a bad game. It actually has some interesting mechanics and an intriguing story. Its real problem is its dated nature and slow pace. 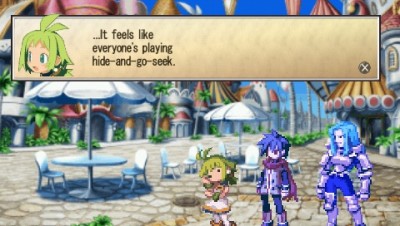 The game has you running off with the young Marona and her very dead guardian, Ash. Merona just wants the world to accept her. Sadly, most people are turned off by the whole talking to the dead thing. The story follows her efforts to help people with their problems in her quest for acceptance and slowly delves into much darker territories. The exposition is told through some interesting side-view cutscenes and are, at times, voice acted fairly well. The game lacks much of the humor seen in other NIS games and depending on your stance, this is a plus or a minus.

The story is one of the high points in Phantom Brave. The characters are interesting, when they aren’t being painfully cute and optimistic, and for the most part you will have some investment in them. The bad news is that they are also woefully overused JRPG archetypes and if you have any reservations about bubbly, schoolgirl laughter and moody teens you might just want to avoid it altogether.

As presentation goes, the graphics are dated. I’m talking really dated… like carbon dated. Much like Disgaea and Tactics Ogre, the camera is set at a slightly isometric position with a slew of sprites wandering the battlefield and fighting. The effect is so tired and old that watching the battles take place can become taxing. Between forcing the camera into acceptable positions and the ugly terrain that waits to greet you, it just starts feeling like you’ve fallen back into the PS1 era and the only way out is the “Power Button.” 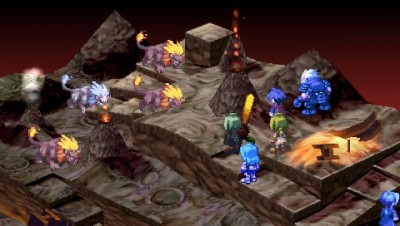 But wait! Don’t give up on Phantom Brave just yet! While the story is decent and the graphics are merely acceptable, the combat system is actually incredibly unique and interesting. Since Merona can interact with the dead she can also “confine” phantoms to objects on the battlefield. This will allow one of your characters to enter the corporeal realm and get their havoc on. The things you can confine a phantom to (trees, rocks, wood, flowers) have a direct effect on the strengths or weaknesses of the phantom confined. And since your troops are one step away from the business end of a proton pack, their ghostly forms can only remain on the battlefield for a set number of turns. Knowing this, you’ll have to really think of the best ways to utilize the undead army at your disposal.

The other interesting combat mechanic is the movement system. Phantom Brave offers a free-flowing system of movement that is based not on a grid but on a character’s prescribed steps. With your offensive tactics able to change on the fly in the battlefield, the freedom of movement makes the game less a “get to square B” affair and more of a “what is a man, a miserable pile of secrets? Have at you!” experience.

There’s a lot offered up on the small UMD. The game takes about 45 hours to complete and has a wealth of quests and the usual level grind associated with strategy RPG’s. Although the PSP version offers some new characters you can summon into the battle and an epilogue mode, it is still largely the same game you might have already played twice (I sincerely hope you haven’t). In fact, from what I was able to see, the game itself suffers from some frame-rate problems that were non-existent in the Wii version. As ports go, nothing seems to have been optimized or really added to this guy. 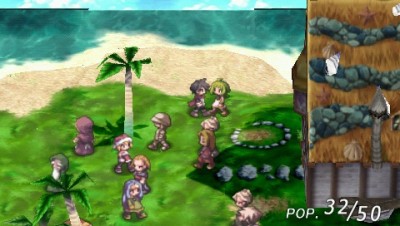 To those who might have played the title on a different console, you have absolutely no reason to play this portable incarnation. The game hasn’t aged as well, but it still offers a unique experience to anyone new to the series. Can you call three of the same game a series? So, if you’re new to Phantom Brave and have a deep love for tactics games, then this game will definitely offer up enough of a unique and engaging experience to warrant a rental, but to those who may have less of an appreciation for the genre or have simply been here before, maybe you should try something a little more palatable.